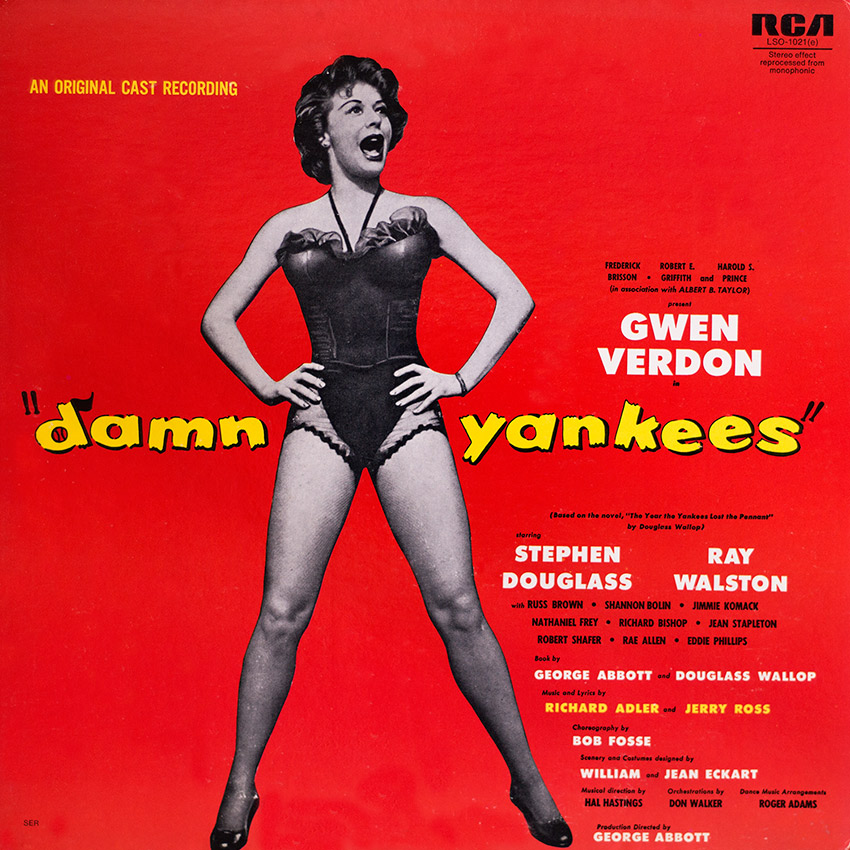 GWEN VERDON (Lola)
Gwen Verdon’s electrifying performance in Can-Can sent the Broadway critics hurrying off to their thesauri for new adjectives; she was hailed as the greatest Broadway “discovery” since Mary Martin first sang My Heart Belongs to Daddy. Miss Verdon was born in Culver City, California, near the M-G-M studio where her father was an electrician. Her mother, a protegee of Ruth St. Denis and Ted Shawn, managed a Denishawn school in Culver City. Enrolling there at an early age, Miss Verdon received further ballet training from Ernest Belcher, father of Marge Champion.

She did not pursue a dancing career in earnest, however, until 1948, when, as a columnist and film critic for the Hollywood Reporter, she saw Jack Cole in a night club. Inspired by Cole’s performance, she dusted off her dancing shoes to become his partner and assistant for five years. She has danced on Broadway in Alive and Kicking and Magdalena, returned to the coast to appear in the movies—On the Riviera, David and Bathsheba, Meet Me After the Show and Mississippi Gambler —which Cole choreographed. Then came Damn Yankees on Broadway, assuring her a permanent niche in the gallery of big-time stars.

SYNOPSIS
DAMN YANKEES, which is based on Douglass Wallop’s Book-of-the-Month selection, The Year the Yankees Lost the Pennant, tells the story of a plump and balding, middle-aged real estate salesman in Washington, D. C., who is an avid fan of his home-town ball team. In a rash moment he murmurs that he’d “sell his soul to see the Washing-ton Senators win the pennant from the damn Yankees.” At this moment the Devil appears, in the guise of a personable gentleman called Mr. Applegate, who offers to make a pact with him: in return for his soul, he will transform him into a young and unbeatable ball-player. Tile real estate agent agrees but insists on an “escape clause” whereby at a certain date he will be restored to his former self to rejoin his wife and live out his years normally. The Devil agrees.

The phenomenal young player, now known as Joe Hardy, joins the
Senators, and the team moves right up to second place in the American League. But Applegate has other plans; he is secretly on the side of the Yankees and is plotting to whet the hopes of the Senators and then to wrest the victory away from them at the final hour. When young Hardy learns this, he asks to exercise his option and to be returned to his former status at the side of his faithful wife. But Applegate employs the services of Lola, a ravishingly beautiful witch, to tempt him into staying on the side of the Devil. However, Hardy remains true to the wife he left behind him.

Lola breaks a precedent by falling in love with her victim and aids him in defeating the Devil. For her trouble she is converted again into an ugly old crone. The Washington ball club emerges victorious, and the real estate agent is restored to his wife.