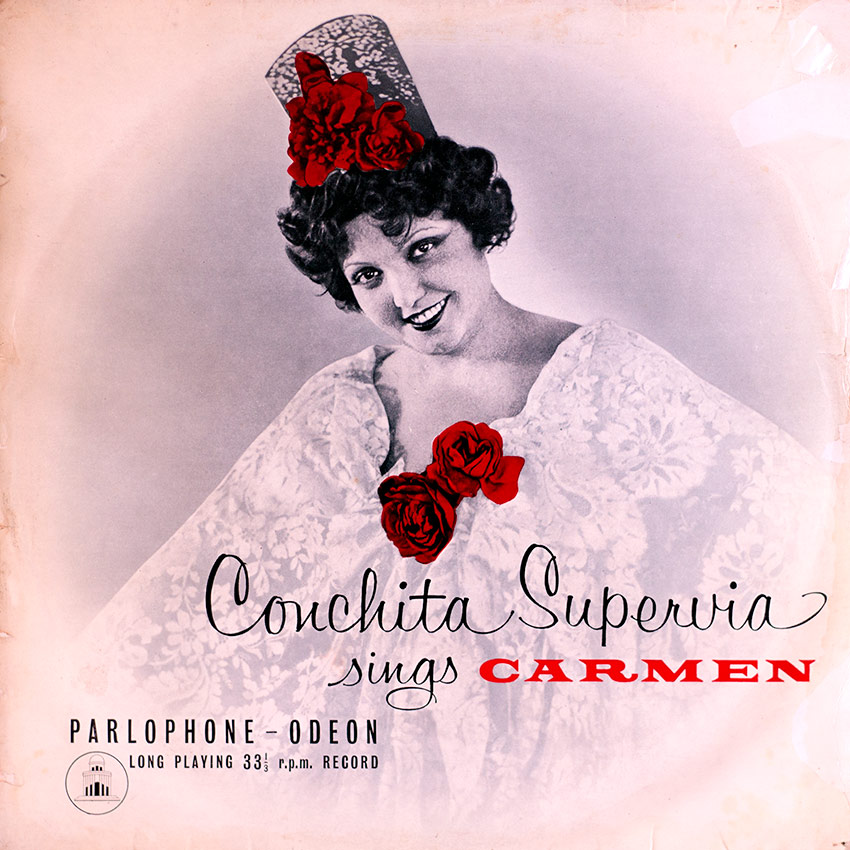 Operatic history has produced many coloratura sopranos, but very few coloratura mezzo-sopranos. Rossini’s wife, the Spanish Isabella Colbran, was one such singer; and for her remarkable mezzo-soprano voice, with a contralto downward range that at the same time was able to cope with florid passages, he wrote several of his operas. In our day, another Spanish artist was similarly endowed. the vivacious and beautiful Conchita Supervia. The date of Supervia’s birth is still a matter of some conjecture; most authorities now accept it as having been in Barcelona on December 8th, 1895; but the Diccionario enciclopedico de la Musica, published in Barcelona, dates her birth as 1891.

The publicity that was put out at the time of her debut in 1910 claimed her age as being fourteen and a half, which ties up with the 1895 birthdate. Yet in November 1911 she was singing Oktavian in Rosenkavalier, when apparently not quite sixteen; and despite the fact that many Spanish singers have made very early debuts, it seems highly unlikely that anyone so young could have coped with that particular role.

She came from an old Andalusian family and was christened Concepcion Supervia Pascual. She was educated in a convent in her native city, and later at the Conservatory of the Liceo, Barcelona.

Her stage debut took place in Buenos Aires in 1910 in Breton’s opera Los amantes de Teruel and during her first season she was also heard in Stiattesi’s Bianca di Beaulieu; among her fellow artists were the tenor Francisco Villas and the baritone Jose Segura Tallien.

In November 1911 she was chosen to sing the role of Oktavian in the first Italian performance of Der Rosenkavalier at the Teatro Constanzi, Rome, with Hariclea Darclee, the first Tosca, as the Marschallin, Ines Maria Ferraris as Sophie and Pavel Ludikar as Ochs.

In 1912 Supervia appeared at the Teatro Liceo Barcelona as Carmen and Delilah with the tenor Bernardo De Muro. In 1914 she sang Leonora in La Favorita, Mignon, Carmen, Santuzza, and Maddalena in Rigoletto in Havana. Other members of the company included Maria Barrientos, Rosalia Chalia Herrera and Concetto Paterna.

In 1915 Supervia made her American debut with the Chicago Opera as Charlotte in Werther with Lucien Muratore; she was also heard as Mignon and Carmen; in both of these operas she sang opposite the tenor Charles Dalmores.

By the end of the war she was again in Barcelona singing Delilah; and by the early 1920’s she was establishing herself in Italy: Marguerite in the Berlioz Faust at Bergamo, Car-men at Genoa, Mignon at Ferrara.

Then came an invitation’to join the Scala company for the 1924-5 season. The theatre at this time was enjoying one of the most successful periods in its history under Toscanini; and Supervia sang there during each season until 1929. Her first appearance was as Hansel with Ines Maria Ferraris as Gretel and Elvira Casazza as the Witch, conductor Ettore Panizza; she repeated this role in 1926 and 1929. In 1927 and 1928 she sang Oktavian, the first time under Panizza, the second under Strauss himself, who also conducted a revival of Figaro with Supervia as Cherubino, Mercedes Llopart as the Countess, Adelaide Saraceni as Susanna, Stabile as Figaro and Umberto Di Lelio as the Count. This opera was repeated the following season under Gabriele Santini, who also conducted the first Scala performance of Ravel’s L’Heure Espagnole, with Supervia as Concepcion.

It is strange that the Scala never heard her either as Car-men or in the Rossini roles that she made so much her own during the years 1925-35. These included Angelina in Cenerentola, Isabella in L’Italiana in Algeri and Rosina in Il Barbiere (in its original key). She sang these roles under a variety of conductors—Gui, Marinuzzi, Bellezza and Serafin; and with an ensemble of artists whom she virtually insisted should always appear with her in these works : Piesira Giri, Ebe Ticozzi, Dino Borgioli, Nino Ederle, Vincenzo Bettoni, and Carlo Scattola. When these operas were heard in Florence, Turin, Paris and London, it was with these artists; though at Covent Garden Ezio Pinza was also heard as Don Magnifico in Cenerentola.

Supervia’s London debut took place on March 28th, 1930 at the Queen’s Hall; and from thence onwards she was a frequent visitor to our concert halls. A year later she married Mr. Ben Rubenstein, a London business man, and made her home in England. She was invited to appear at Covent Garden as both Carmen and Cenerentola in 1934, but declined to do both roles at the same time, because of the great difference, dramatically and musically, in them. So in 1934 she sang only Cenerentola; in the first part of the 1935 season she repeated this role and added Isabella in L’Italiana, and then, in the latter part of the season, she sang Carmen under Sir Thomas Beecham with Jose Luccioni as Don Jose, Jose Beckmans as Escamillo and Ina Souez (later Joan Cross) as Micaela.

Supervia had sung Carmen in Paris in 1930 with Gaston Micheletti as Jose, Andre Gaudin as Escamillo and Odette Ertaud as Micaela; and she returned to sing it again at the Opera-Comique in 1933. It was during 1930, however, that the extracts on this record were made with her original Paris Jose (Micheletti), Mercedes (Andree Bernadet) and Frasquita (Andree Vavon); the conductor is Gustav Clodz.

After Supervia’s Covent Garden appearances in the summer of 1935, it was announced that she would again sing there during the short autumn season and would tour the British provinces with the Covent Garden company in Cenerentola. For health reasons she had to cancel these appearances.

On March 29th, 1936 she entered a London nursing home to await the birth of her baby. On March 30th, she gave birth to a still-born child and a few hours later she herself died. Fortunately her voice and art have been preserved for all time by the Gramophone, and twenty years after her death we can still enjoy the magic and charm that were Conchita Supervia.