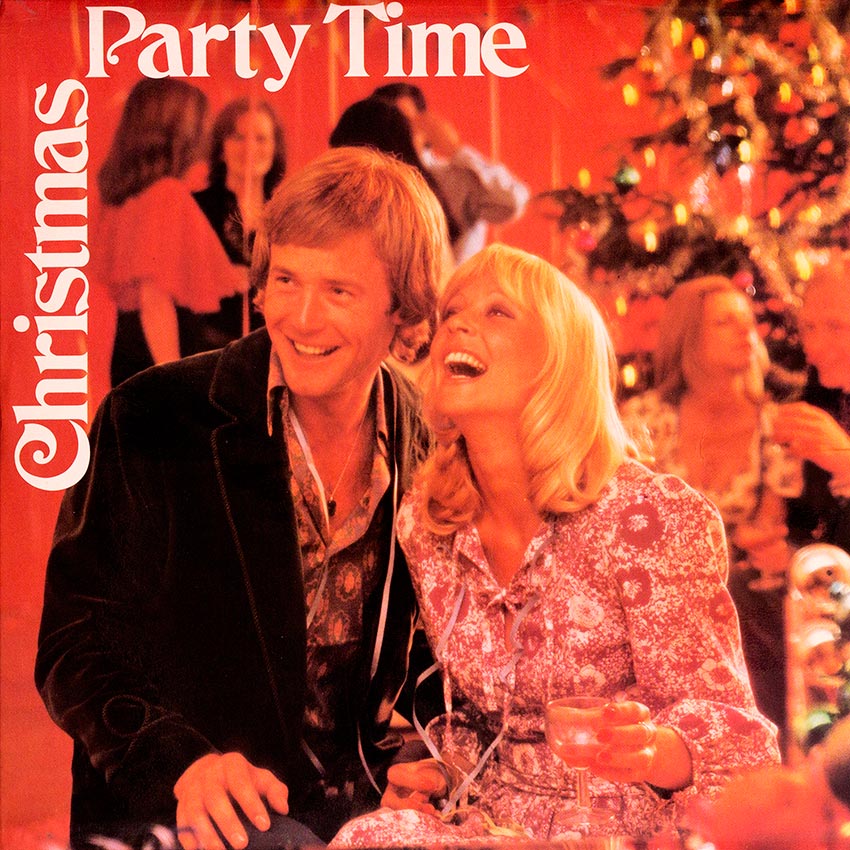 The Hiltonaires Orchestra and the Tony Mansell Singers bring back the music—and the magic—of Christmas: carols, popular songs, traditional melodies, without which the festive season wouldn’t be complete. These are the tunes we forget all year .. . until they remind us, joyfully, that Christmas is here again!

Every melody here has that unique, evocative quality that brings back countless other Happy Christmases: White Christmas, still the biggest-selling song ever, thanks to Irving Berlin (and Bing Crosby); Winter Wonderland, the big hit of 1950 for the Andrews Sisters; Rudolph the Red-Nosed Reindeer . . . remember Gene Autry’s version of this perennial children’s favourite? Of course there are carols, too: Good King Wenceslaus — a timely reminder of the saintly ruler who brought Christianity to Bohemia a thousand years ago; and God Rest Ye Merry, Gentlemen — to conjure up many a Dickensian Christmas-card scene. The party concludes, naturally, with a medley of good, old-fashioned party songs, like There’s a Tavern in the Town, and Auld Lang Syne.

We won’t pretend you’ll play this record all year round. But come next year, and many years after, you’ll be glad to have among your records one truly ‘ Christmassy’ selection— to set the atmosphere, put you in the right mood, and help you celebrate! 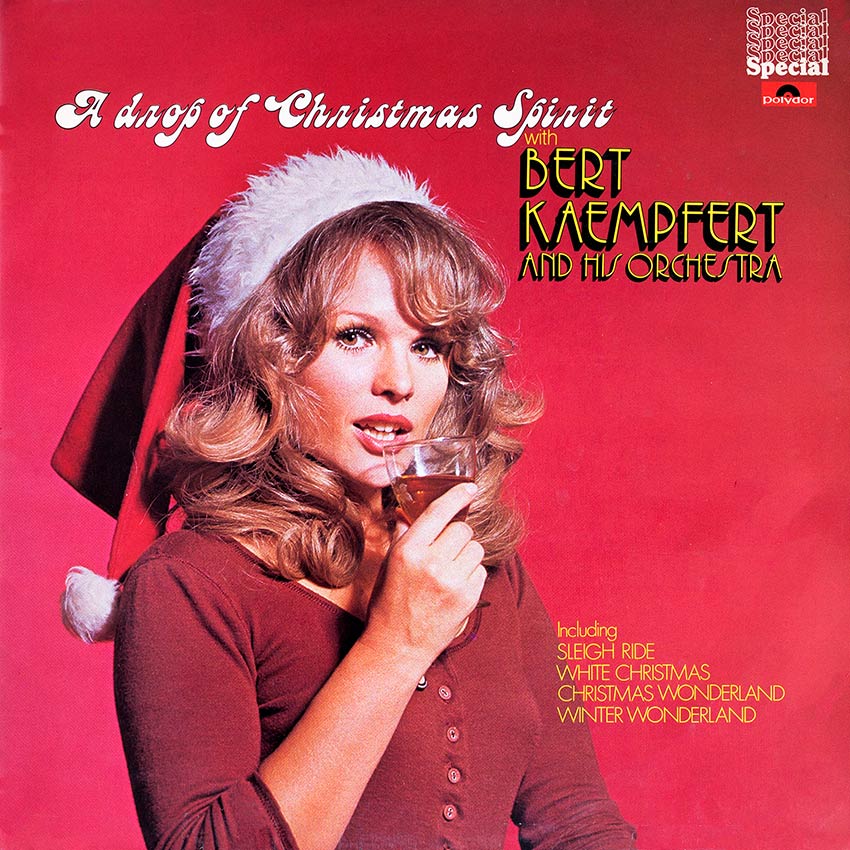 Santa Claus is comin’ to town is but one track arranged by Bert Kaempfert. With a lovely Christmas cover to make you feel the Christmas spirit. Or drink it. 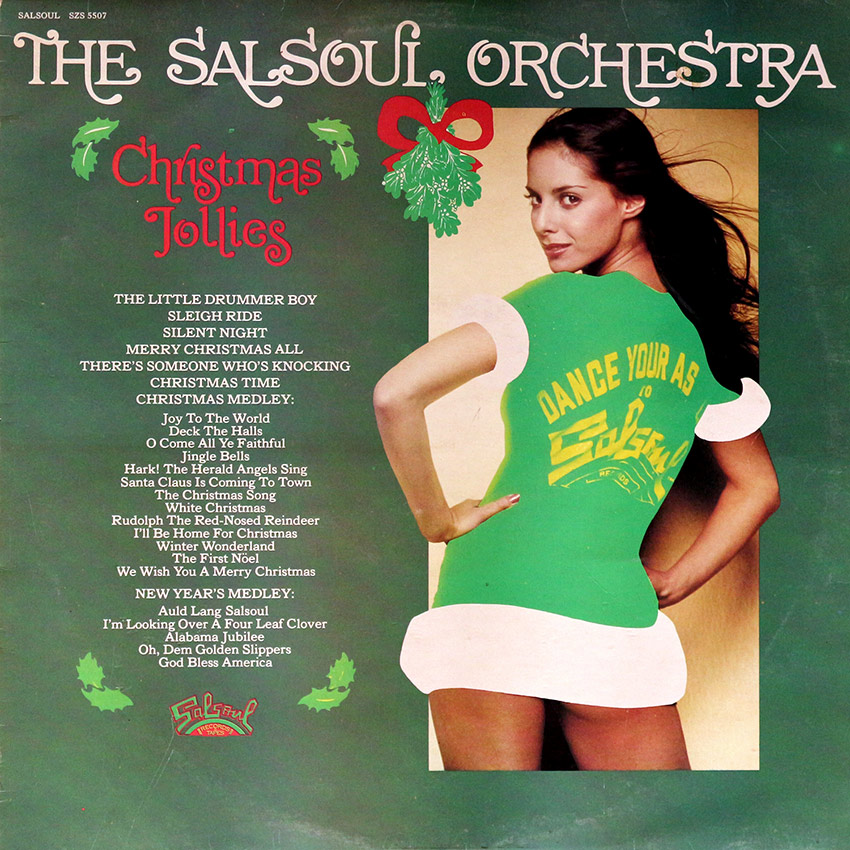 “Dance your ass to Salsoul Records” shouts the back of this lady’s T-shirt. Salsoul being the label set up by MFSB’s Vincent Montana Jr who produced and arranged this collection of yuletide tunes. “Salsoul” was coined to describe the fusion of soul music and salsa music as made by urban Latinos. 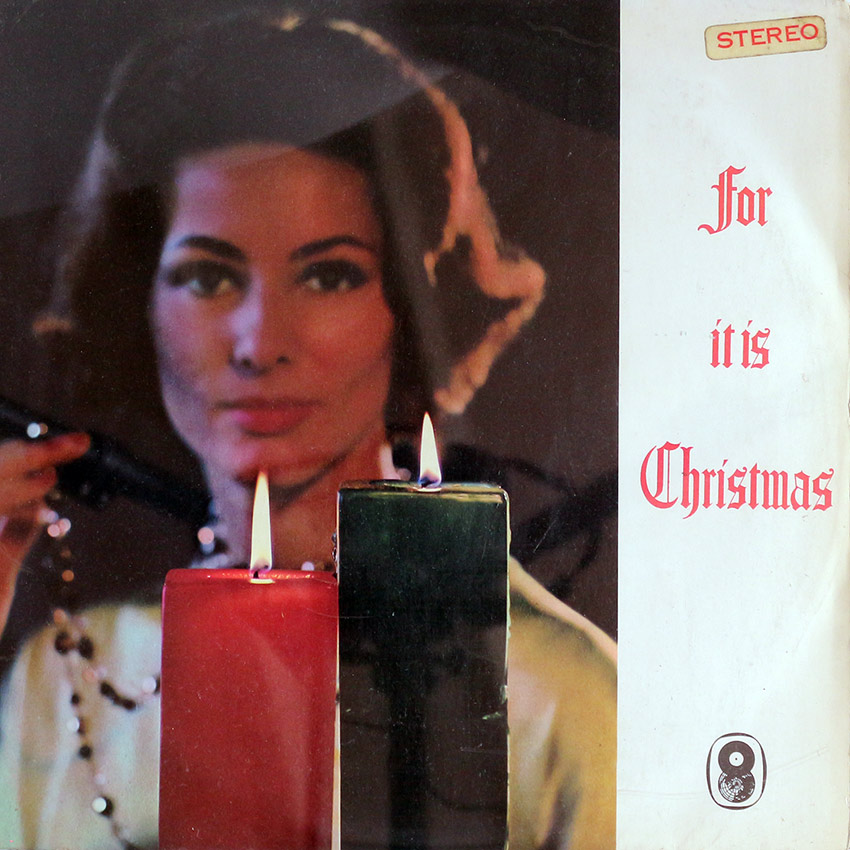 This record is a Fiona Bentley production. Fiona Bentley was a founder member of the World Record Club alongside Lord Aberdare who wrote the sleeve notes for this album. The World record Club was a membership style club producing for sale largely classical records available only through mail order.

The spirit of Christmas means so much to all of us carol singers, bedside stockings, brass bands, roast turkey, a manger at Bethlehem, Christmas trees, holly and mistletoe all of them bringing happy memories of peace, good-will toward men.

This record evokes the spirit of Christmas in words and music. In its variety it reflects the different ‘associations that Christmas has for each of us; in its underlying theme of the birth of Christ, it retains the great religious significance of Christmas and brings its message of hope and joy.

The music includes well-known carols such as Hark the Herald Angels Sing and 0 Come All Ye Faithful; lesser-known carols, such as From Far Away We Come to You: and carols from France (Ils est né, Divin Enfant), Germany (Stille Nacht), Poland and the West Indies. Other music includes Thou Must Leave Thy lowly Dwelling from Berlioz’s “Childhood of Christ” and an extract from Menotti’s beautiful “Amahl and the Night Visitors” – Have You Seen a Child?

The spoken word includes extracts with a Christmas flavour from authors ancient and modern’ – from William Tyndale’s Bible to Dylan Thomas’s “Memories of Christmas”. Dylan Thomas tells how he went carol-singing, one Christmas Eve with his friend Dan; how they sang ‘`Good King Wenceslas” outside a large dark house and how they thought they heard the voice of a ghost joining in. Shakespeare has his say with an extract from “Hamlet” and Dickens contributes with his famous character Scrooge from “A Christmas Carol”. Less familiar are Longfellow’s “Three Kings Came Riding From Far Away” and Meuwick Heine’s “Dear Children, They Asked In Every Town”.

Artists taking part include Jenny Roderick singing some of the foreign carols; Edmundo Otero with his guitar, singing a West Indian carol The Virgin Mary Had A Baby Boy; boy soprano Christopher Nicholls singing From Far Away We Come To You: and Ian Humphries and the Linden Singers. The narrators are Jeremy Hawk, Sidney Monekton and Glyn Houston, whose Welsh accent does justice to Dylan Thomas’s prose.

These are some of the threads from which Alexander Faris and Troy Kennedy-Martin have woven a tapestry of the spirit of Christmas.