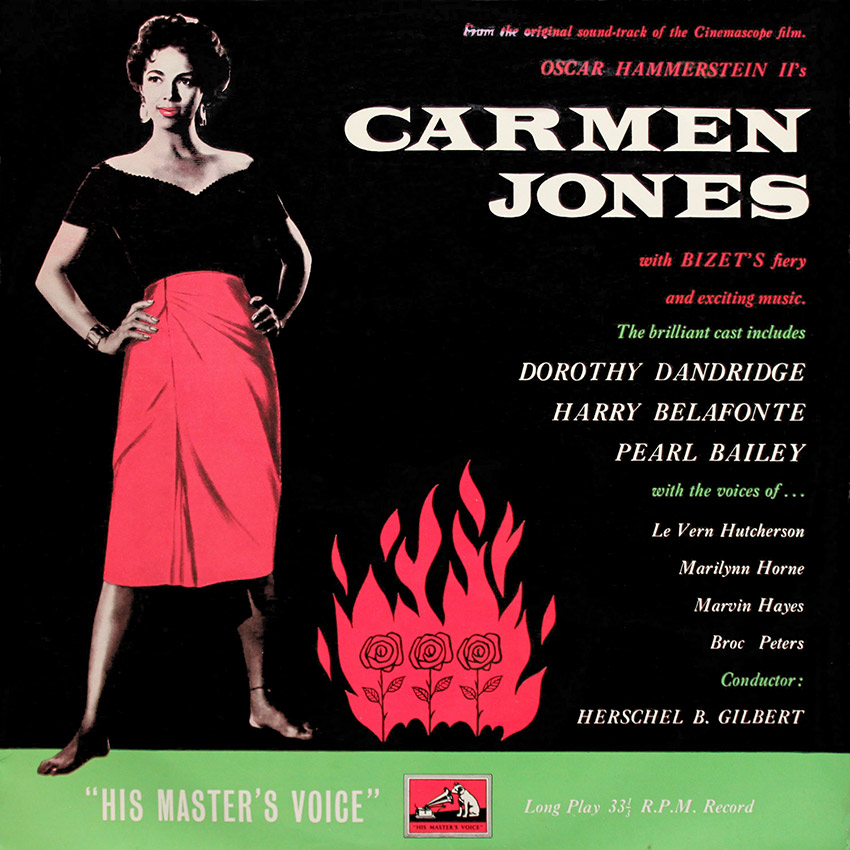 Stan’ Up An’ Fight
Quintet: Whizzin’ Away Along De Track
Card Song
My Joe
Duet And Finale

Probably no film has created more comment in recent years than has Oscar Hammerstein II’s ” Carmen Jones “. The fact that the music of Bizet had been applied to a modem story and a present-day setting, caused purist lovers of the original opera to shudder. However, none was disappointed with the brilliant treatment of this subject and that applies to this LP record, taken from the original sound-track of the film.

As Oscar Hammerstein himself says, “Carmen Jones is not in any way an opera, but is, in fact, a musical play based on an opera. The score of Bizet’s original music has not been altered in any way, nor has the traditional tempo been varied.”

Otto Preminger in his production of “Carmen Jones ” as a film, has woven together the stirring music of Bizet with exceptionally fine lyrics and the synchronization of talented actors and actresses. with the magnificent yokes of an unseen singing cast.

The story of ” Carmen Jones ” follows in a modern pattern, along the lines of its operatic counterpart, with a change of setting that brings the action into the 20th century — specifically World War II.

The story begins when Joe (Harry Belafonte) an Army corporal stationed in Jacksonville, U.S.A., is about to enter Flying School and a party is given in his honour by workers of the nearby parachute factory. Among them is his sweetheart Cindy Lou (Olga James), for whose attentions Sgt. Brown (Bros Peters) is a rival. During the course of the celebrations, Carmen Jones (Dorothy Dandridge) swaggers in and attempts to use her feminine wiles on Joe, who is not at all interested.

Joe at that time is seeking permission from his C.O. to marry Cindy Lou when Carmen chooses to pick a fight with another female employee. Sgt. Brown maliciously puts her in Joe’s custody to take her to Jacksonville Jail, and suggests to Cindy Lou that Joe has volunteered to be responsible for Carmen.

Carmen continues to lure, and her attempts are eventually successful. Meanwhile they stop at a shanty town where she proudly shows of her Joe — all the time promising him that they will soon be aboard the train for Jacksonville and the jail. Carmen’s grandmother, who is a fortune-teller, predicts evil things for the couple, which so much upsets the superstitious Carmen that she runs away.

Joe is imprisoned for his neglect of duty, and during his imprisonment he is so devoured by his passion for Carmen that he cannot face Cindy Lou when she visits him. The only reliefs in his
imprisonment are letters and promises from Carmen, with a gift of a rose.

Carmen, meanwhile, settles down at Billy Pastor’s night club to wait for Joe. Husky Miller (Joe Adams), a heavyweight champ, wants her as his girl friend, but Carmen will have none of it, despite the coaxing of her old friend Frankie (Pearl Bailey), whose job comes to depend on arranging things for Husky.

Joe is released, and joy reigns until Carmen realizes he still plans to go into flying school. She wants him to forget the army and go of to Chicago with her. He fights the temptation, but Sgt. Brown overhearing the scene, intrudes sneeringly and is knocked out by Joe, who, knowing now that the alternative is prison, hides the unconscious sergeant and agrees to Carmen’s plan.

In Chicago, they must evade M.P.’s and go into hiding. When their money has gone, Carmen goes to Husky for more. Frankie urges Carmen to be nice to the fighter, but Carmen swears she’s no two-timer. When Carmen retums to Joe, who complains to her for being away so long, he is suspicious as to the source of the money provided for food. This drives Carmen back to Husky’s where, at a party, she reads her own cards, forecasting death.

Joe follows Carmen, eluding the M.P.’s, while Cindy Lou arrives in pursuit of Joe. All meet at Husky’s training quarters, where Carmen tells Joe it’s all over between them, but helps him to escape. Cindy Lou departs in tears knowing that she has lost her Joe.

At the championship fight, the crowd acclaiming Husky’s triumph, Joe confronts Carmen, again pleading with her. When she refuses his love, he kills her. As the mob mums out of the doors screaming for their hero, the heartsick Joe weeps for the dead Carmen and voices his hope they will soon “hang him on the highest tree”, so that he might join his beloved.