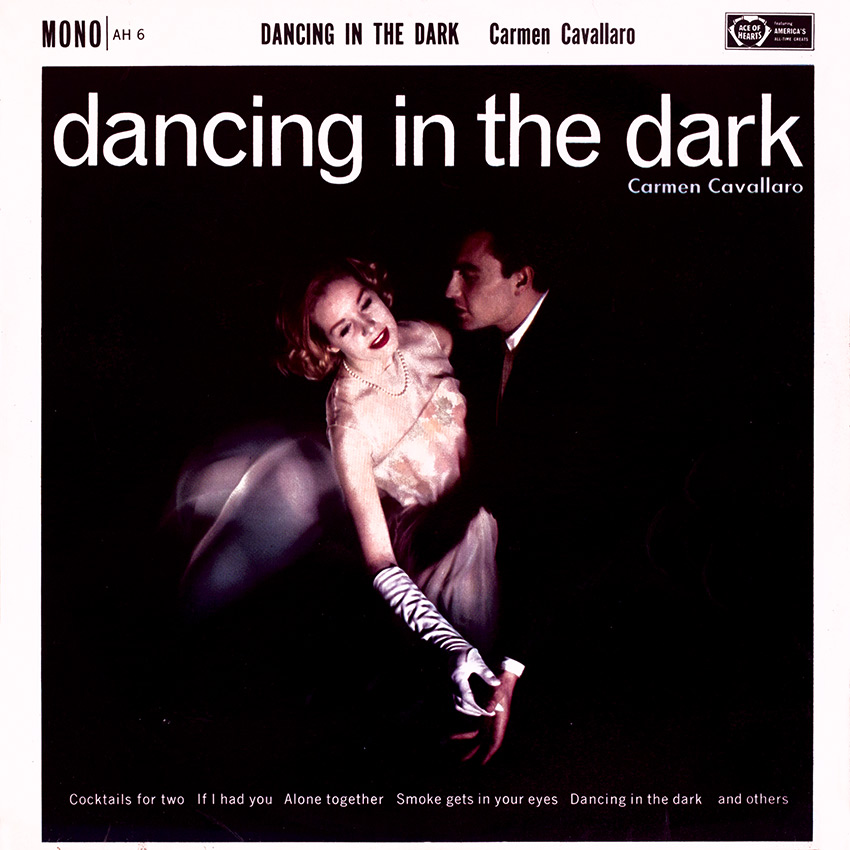 Apparently it didn’t take the human race long to find out that dancing is fun! For all we know, Adam and Eve may have engaged in a primitive form of the waltz or foxtrot. But although there are dances and dancing to fit every hour, the phrase “dancing in the dark” has a very special and intimate meaning all its own.

Dancing in the dark is more exciting, more romantic, more inviting, more interesting, than dancing at other times. Your own imagination – as did Adam and Eve’s, in all probability – can tell you why’.

Here, then, is a collection of melodies for dancing in the dark; familiar – yet ever new – love songs adapted by that master of the romantic keyboard, Carmen Cavallaro. It might not be inappropriate to suggest that you may even enjoy not dancing to these melodies.

As you probably have guessed by the ease and brilliance of his playing, New York-born Carmen Cavallaro was trained for a concert career. A close friend of the family hearing him pick out tunes on a toy piano at the age of three, urged that the youngster’s musical talents be developed immediately. His parents were receptive to the idea and so, from the age of five years on, Carmen was sent to study at various conservatories. After finishing his courses, he travelled extensively to advance his studies. Subsequently he played in all the leading capitals of Europe.

There is no doubt that Cavallaro’s training in the classics and his ability to play from memory the most difficult music aided him immeasurably and contributed a color and scintillating glitter that caught on at once and made him highly successful in his new field. Carmen emphasized a delicate phrasing interspersed with bits of flashing technique, unexpected changes of pace, and a beautiful full legato tone that makes his interpretations so appealing and so unique.

Connoisseurs agree that Carmen’s style is entirely different from that of any other player of popular music and one which he has made peculiarly his own. While there is no one who plays exactly like him, he has many followers, as is the case with all successful artists. Carmen himself has imitated no one in forming his style, which explains why the public has so quickly recognized and acclaimed its freshness and distinction.