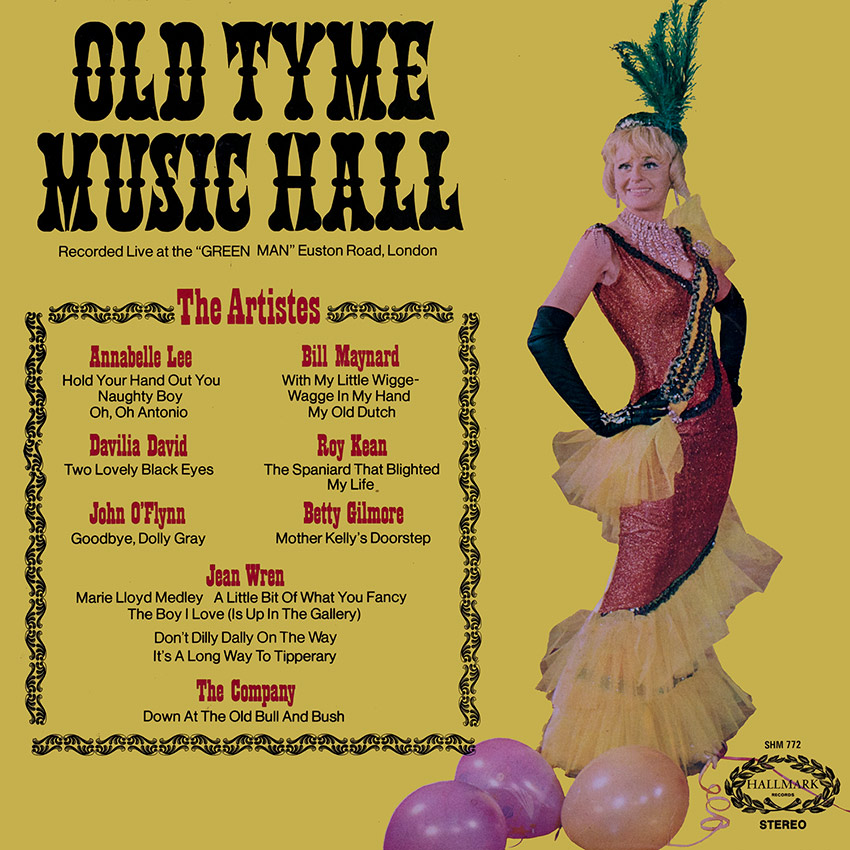 At a time when television fame seems to have become something of a universal yardstick for measuring success, it’s refreshing to find an area of show business that doesn’t depend upon big names for its success and popularity. It’s called, quite simply, Music Hall; and although the venue has changed over the years, from Victorian tavern to theatre and now, in the 1970’s, to the British pub, the same feature has continued to emerge; lively infectious entertainment that may often contain a hint of naughtiness but which can never offend.

Down at the “Green Man” in the Euston Road they’re well aware that the music hall popularity has come full circle and on the particular night that this L.P. was recorded a highly appreciative audience backed up the efforts of the performers in confirming a great truth – that music hall is here to stay.

The performers are all seasoned in the traditions of Music Hall even though none of them is scarcely old enough to remember it at the height of its popularity. What’s more, they prove that music hall songs contain an element of enjoyment that appeals to all ages. On the personal side they’re as varied a bunch as you’ll find assembled on any stage; Davilia David and Bette Gilmore both come from that other side of the world, namely Australia and New Zealand; while Annabelle Lee is a veteran of some notable BBC series with Benny Hill and the late Tony Hancock. John O’Flynn, born in Cork, has worked in TV and radio and can sing anything from grand opera through to jazz (in this case he displays his versatility on a classic music hall song), and Jean Wren is a name familiar with many music hall devotees. Roy Kean, Folkestone-born actor who sings in wicked fashion “The Spaniard who blighted my life”, comes from a background of legitimate theatre, TV and music hall chairman. He also has made something of a hobby in unearthing old music hall songs and routines.

And then there’s Bill Maynard, man of many parts, who, since his days with Terry Scott in “Great Scott-It’s Maynard”, has ventured into legitimate theatre and films; and with his rendering of “My Old Dutch” and “With my little wigge-wagge in my hand” he proves that he’s ideally suited to music hall.

This, then, is as entertaining a slice of Music Hall as you’re likely to find. With the atmosphere of the “Green Man” giving just the right flavour, the applause of the audience showing their obvious enjoyment and a team of entertainers who gain as well as give pleasure, the mood is set for something rather special. Call it a walk down memory lane, a taste of nostalgia or what you will …what it does add up to is the unique entertainment satisfaction that only Music Hall is capable of providing.