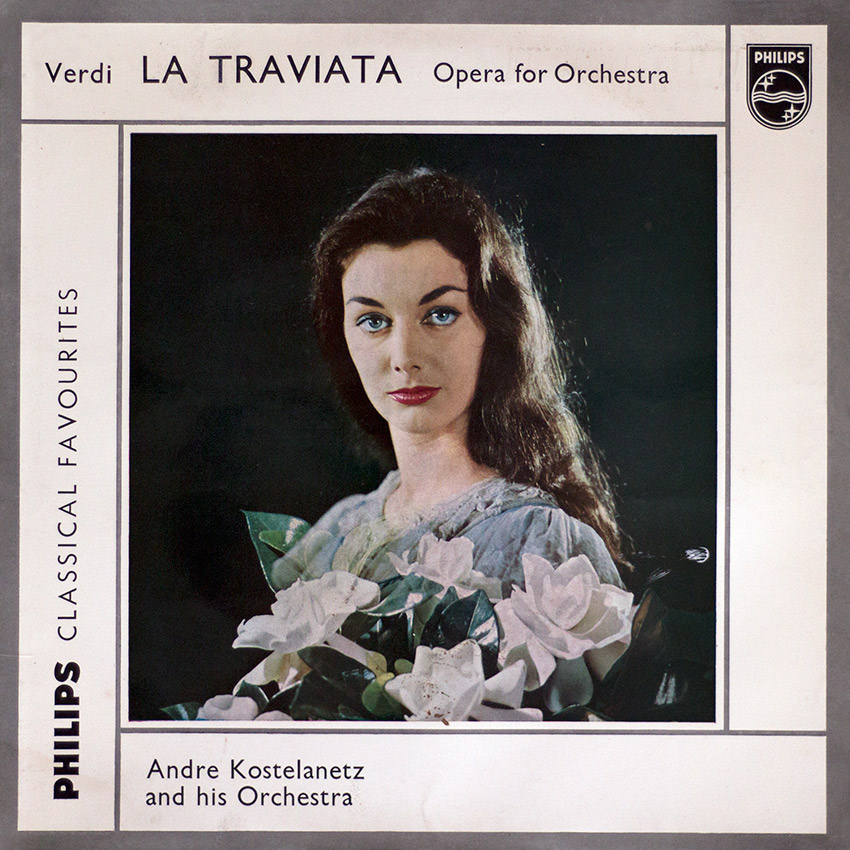 The story of “La Traviata” is based on the younger Dumas’ famous play ” La Dame aux Camelias,” which had its premiere in Paris in 1852. Verdi saw the play in the French capital that same year and instantly recognised the possibilities of transforming it into an opera.

With the help of his librettist, Francesco Piave, he accomplished this feat in an amazingly short time, making minor alterations and simplifications in Dumas’ story. One of the changes concerns the name of the heroine. In the opera she is called Violetta. It is an immense credit to the composer’s genius that he extracted all possible character nuances from the original play and brought them into even sharper focus through his music. Again we have an example of the opera outliving the play as the basic story, its characters having become ageless through the power of the music. When the opera had its premiere at the Teatro Fenice in Venice in 1853 it proved a resounding fiasco. It seems that the audience objected to so realistic and immoral a subject in modern dress. Not wail Verdi had changed the period of the action did the opera become an instantaneous success. ” Time will tell,” Verdi wrote after the disastrous Venice premiere and time certainly has made ” La Traviata” one of the most popular operas.

THE STORY
ACT I.—The prelude contains the tragic melody that is descriptive of Violetta’s fatal illness, which is later fully developed into the hauntingly beautiful introduction to the last act. After the opening bars of the overture this theme is replaced by the motif symbolising her capacity for sincere love. Yet even while it is coming into full prominence it is combined with another theme of arabesque ornamentations, characterising the glittering Parisian salons that are the back-ground for the heroine’s life. After the prelude the curtain rises on the magnificent banquet hall in Violetta’s home. The luxury of her surroundings bespeak the wealth which she enjoys as the most famous Parisian courtesan of the day. The arriving guests inquire whether Violetta is well enough to give this party to which she replies, in complete defiance of her recent illness, ” It is for joy alone that I live! ” Presently she is introduced to a young man, Alfredo Germont, and is told that he had passed the days of her illness in the vicinity of her house, in order to be near her. When the gathering demands a toast, it is Alfredo who sings of wine, wit and beauty, to which Violetta soon replies with a toast to lightheartedness and gaiety. Everyone joins in the toast, but now Alfredo’s words
are taking on a new meaning, a new urgency. They are unmistakably words of love for Violetta. As the guests proceed into the ballroom led on by Violetta, she is overcome by one of her spells of fainting and coughing. Her worried friends gather around her but she assures them that it is nothing and bids them to start dancing. They leave her and return to their revelry and only Alfredo remains behind with Violetta who wishes to rest for a while. Alfredo’s concern and love for her are obvious and she is almost taken aback by his sincerity. The evening draws to a close and the guests depart. Violetta, now alone, is aroused by a strange sensation. ” Ah, fors’è lui ” she wonders, recalling Alfredo’s words. But realising that a life of love and devotion for one man is no longer possible for her she dispels any introspective thoughts with a toast to pleasure, ” Sempre libera ” (Always free). It grows increasingly wilder as Alfredo, outside, sings again of his love for her.

ACT II.—Several months have passed. Violetta and Alfredo are ecstatically happy while living together now in a charming country place near Paris. By accident Alfredo dis-covers that Violetta has been selling her jewellery to pay the bills. In shame and remorse he sings the aria ” O mio rimorso “, an aria which is customarily cut in the opera (in favour of the more popular ” De’miei bollenti spiriti “) and which Andre Kostelanetz herewith restores to the score. When Alfredo has left for Paris, in an effort to raise some money himself, Violetta is confronted by a visitor. It is Alfredo’s father, the elder Germont, who asks her to leave his son, because her tarnished reputation is standing in the way of his son’s career. Worse still, Alfredo’s affair with Violetta is harming the lives of other members of the Germont family. Heartbroken, Violetta finally agrees to make the sacrifice and leave Alfredo. Because he must never know the real reason, she tells him in a letter that she is weary of his love and has returned to her former life in Paris. On his return Alfredo finds the letter and is consoled in his despair by his father who sings the famous aria ” Di Provenza it mar.” The second scene of the act takes place at a ball given by one of Violetta’s friends. Alfredo has gate-crashed the party, hoping to find Violetta. But when she makes her entrance on the arm of an old admirer, Baron Douphol, Alfredo ignores her and makes for the gambling table. Nervously Violetta watches him, as he is winning round after round. Finally he takes his winnings and hurls them at her feet, exclaiming sarcastically that thus he is repaying the money she had spent on him. The crowd is horrified at his outrageous behaviour and the Baron challenges him to a duel. Mustering her last ounce of strength, Violetta tells Alfredo that her actions were prompted solely by her love for him. She falls to the floor in a faint.

ACT III.—After the moving orchestral prelude to this act, the curtain rises on Violetta’s bedroom. Her grief on having been forced to leave Alfredo and the subsequent shock at the party have left her health completely undermined. The doctor now holds little hope for his consumptive patient. With difficulty Violetta manages to leave her bed. In her hand is a crumpled letter which she has read continually. It is from the elder Germont in which he tells her that after the duel Alfredo had fled to a foreign country, and that he, the father, finally told him of her sacrifice. The letter ends with the assurance that Alfredo will soon return to Paris to ask Violetta’s forgiveness. Looking into her dressing-table mirror she is horrified to see her face drawn and haggard and in a most pathetic aria, ” Addio del passato “, she bids farewell to the world. A few moments later Alfredo rushes in begging her to forgive him and assuring her of his undying love. In his arms she once more dreams of a life with him, knowing that now his father will no longer stand in their way. To the orchestral strains of Alfredo’s love theme from Act I she feels renewed strength. Rapturously she exclaims: ” It’s strange—but the terrible pains have ceased. New strength is born in me. Yes, yes, will live! ” and with a last joyous outcry she falls dead in Alfredo’s arms.