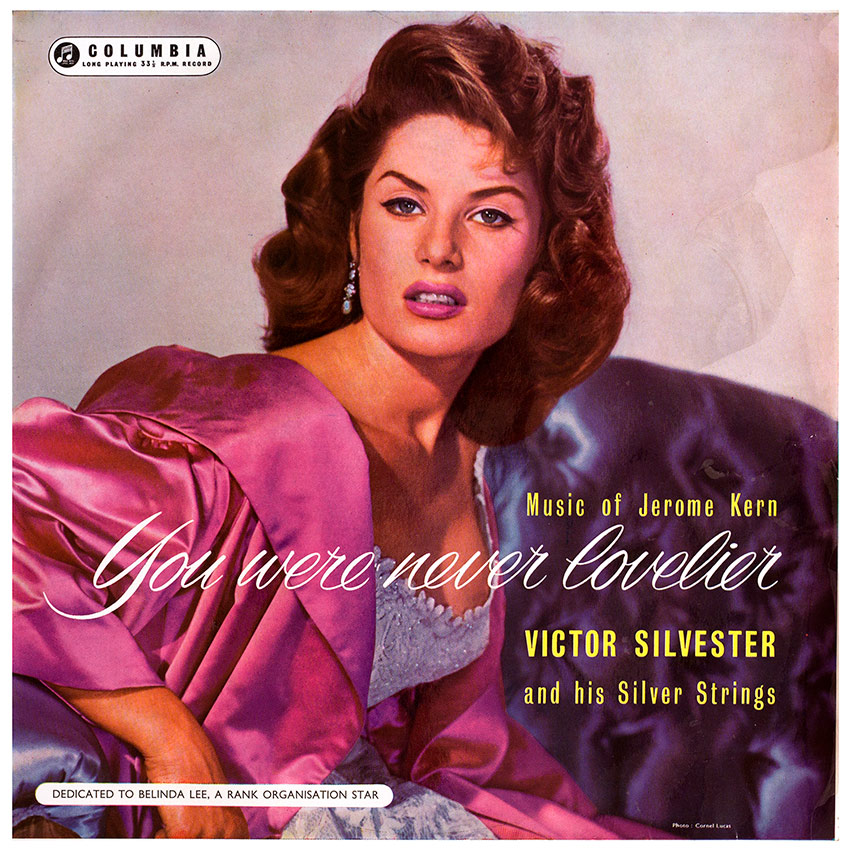 In his lifetime Jerome Kern composed so many excellent numbers that it was a difficult task to decide on just which should be included in this selection, but we think you will agree that Victor Silvester has certainly chosen most of Jerome Kern’s greatest successes.

From “Showboat” which was first presented in 1927, two numbers are included —”Make believe” and “Why do I love you?”

“Smoke gets in your eyes” and “Lovely to look at” are from the 1935 production “Roberta”, starring Fred Astaire and Irene Dunne, although the first title was originally from a musical show “Gowns for Roberta” in 1933.

In 1940 Jerome Kern wrote a haunting melody that was to win an Academy Award film “Oscar” as the best tune of 1941—a tune that recalled the capital of France before its war-time occupation. The film was “Till the clouds roll by”. The tune—”The last time I saw Paris”.

“They didn’t believe me” is the earliest of Jerome Kern’s many hit tunes, dating back to 1914, when it brought happiness to many people during the first World War. It was in a show called—”Tonight’s the night”.

“All the things you are” was composed for a show called “Very warm for May”, in 1939, and was later featured in a Hollywood film “Broadway rhythm”.

“All the things you are” was composed for a show called “Very warm for May”, in 1939, and was later featured in a Hollywood film “Broadway rhythm”.

In 1942 he wrote the music for what was to be his last film score; Rita Hayworth and Gene Kelly were the stars, and the film was called “Cover Girl”. Even if you find it hard to remember the film, one tune from it has become a standard favourite—”Long ago and far away”.

These, then, are the melodies featured on this record—melodies by one of the greatest composers of all time. Victor Silvester has paid tribute to a famous American by presenting these tunes to you in a way we think you will long remember, and, we hope, enjoy over and over again.

THE NAME of Victor Silvester is synonymous with dancing and music for dancing throughout Europe and South America, and in large sections of Asia and Africa. In addition, many G.I.’s returning home after the war from places as far apart as Chung-king and Casablanca carried with them memories of his inimitable music.

At the age of 22 Victor won the World’s Dancing Championship, an outstanding feat as he had only begun dancing three years before. His success was due to intensive training and exceptional ability.

He then opened his own dancing school in London’s famous Bond Street, and this became the largest and most famous in the British Isles. People from all parts of the world came to learn dancing there, and these included many notable personalities, such as Madeleine Carroll, Merle Oberon and Belita—to mention only a few. It was his experience as a dancer and his association with Columbia which led to the formation of his Ballroom Orchestra.

At his Dancing Academy—in common with other teachers at the time—Victor found that it was difficult to obtain satisfactory records suitable for dancing, and so he hit upon the brilliant idea of forming his own orchestra. He had learned to play the piano as a boy, and his studies at a London College of Music were to prove of great value. His records were best-sellers from the first issue.

The popularity of Victor’s Ballroom Orchestra led to the formation of an entirely different unit—the Silver Strings—and this combination, featuring the music of Latin-America—soon emulated the popularity of its ballroom counterpart. Today he is one of the few artists in the entertainment world who has at least three records issued every month! He has a seven year contract with Columbia (English label), and a three-year contract with the B.B.C., for whom he has provided a regular programme called “The Television Dancing Club” since 1948. He also undertakes well over 100 broadcasts a year in B.B.C. radio series, among which is a request programme “Music for Dancing” which has been heard regularly on the North American Service of the B.B.C. for the past ten years. Recently Victor has begun to open dancing studios throughout the British Isles in association with the Rank Organisation, and it is estimated that over two hundred studios will be in operation within the next three years.

He has written a book “Modern Ballroom Dancing” which has sold over a million copies in 50 different editions! With his pianist Ernest Wilson, who is also his arranger, and who so brilliantly orchestrated the music for this record, he has written over 150 dance tunes, including Tangos, Rumbas, Sambas, Viennese Waltzes, Mambos, Calypsos, and Rock and Roll! Victor decided to extend its range to encompass the more general field of popular music.

His Orchestras play, and have always played, for those who like to dance, as well as those who like to listen. The musical sound he has achieved is as distinctive in its own right as that of the late Glenn Miller, with whom he formed a close personal friendship during the war, which continued until Glenn’s tragic death in 1944.

Perhaps the best summing-up of the principles which Victor believes in, was given by the maestro himself when he said “The basic essentials of true dance music are melody, simplicity and a consistent rhythm. Join these three entities together and you have music that is nice to dance to and pleasing to listen to.” These principles are clearly defined on this record, and we feel sure that you will find many hours, days and years of enjoyment with this record.