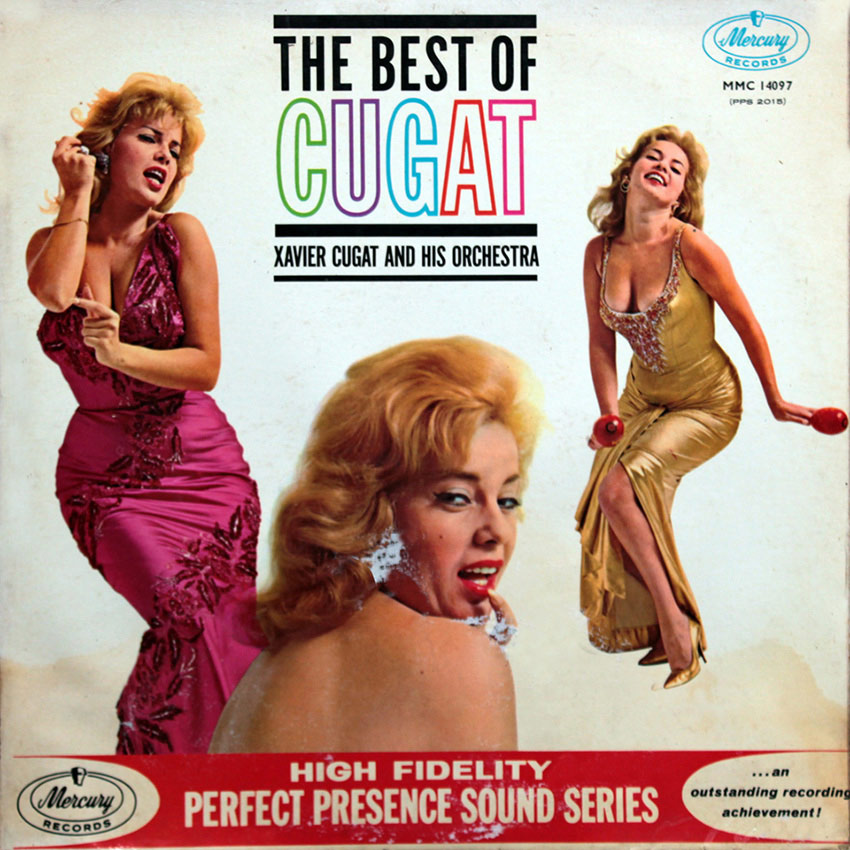 Xavier Cugat was married five times. What we might describe as eternal hope over experience. He also lived to 90 years of age so it clearly agreed with him.

THE MAN AND HIS MUSIC
For thirty years Xavier Cugat has remained the world-wide king of the Latin-American beat. It is almost entirely due to him that we have received the thrilling tempo of the Afro-Cuban world in our own continent. In the early 1930’s, in a historic radio series in the States “Let’s Dance” which also featured the swinging Benny Goodman, Cugat swept the country with the rumba, a rumba that was adapted by him from the complicated Cuban steps to something more suited to the American world.

From then onwards, Cuban rhythm after Cuban rhythm swept the world. In the late Thirties came the Conga; the Forties produced the Brazilian Bombshell Carmen Miranda and the Samba; to be followed by the Mambo, and then the Cha-Cha in more recent times. Over the years, as stars have risen and fallen with persistent regularity, Xavier Cugat has soldiered on, resisting all attempts to dethrone him “the King of Rumba” Mr. Latin-America himself. Yet way back in the Twenties it would never have seemed possible that the cafe fiddler in Barcelona would achieve such a position. One day he was heard by Caruso and was invited to tour the States with the world-famous tenor. In the course of their joint travels, the two men discovered a mutual interest in drawing and amused themselves on their long journeys by drawing caricatures. Cugat’s talent for this has become well known and his drawings have appeared in many leading magazines. In fact when Caruso died, Cugat decided that his own future as a violinist lacked the horizons of greatness he had hoped for and he joined “The Los Angeles Times” as a cartoonist. However, the call of music was too great and Cugat started out with a small combo, specialising, of course, in the rumba. The rest of the story is history.

THE SOUNDS AND THE SONGS
Possibly no other music lends itself so well to the Perfect Presence Sound recording technique as the Latin American, and particularly when it is in the hands of an expert like Cugat. This LP presents twelve great songs of the last three decades all of which receive the Cugat treatment. Mama Inez, which opens Side One is considered by many to be one of the greatest of all Cuban rumbas. It was a great hit in 1931 and one of the melodies which really established the rumba rhythm. Tea For Two needs no comment as to its history, merely gratitude from everyone concerned with music that Vincent Youmans wrote it for our delight, a delight that has remained constant since 1924. More up to date is Tequila, which first attracted attention in California in 1958, and over here in Britain very soon afterwards. Taboo is a melody of the early Forties written by Margarita Lecuona, a lesser known but worthy bearer of the name. Sway has recently been revived by Bobby Rydell for the teenage generation, the older ones will remember it from around 1950; this Cugat version is for every generation. A breakdown of the arranging gives a perfect example of the supreme Cugat execution. The basic pattern is set by a question and answer colloquy between brass and saxes in the introduction. The scratcher is followed by an upward chromatic run on the marimba which leads us to the first chorus, taken by the brass with answering figures by saxes tagged by low trombones and bongos. The release is played by saxes in unison. The second chorus is taken first by jazz-oriented saxes, then by trombone-led brasses with figuration by flutes and piccolos. The release is shared by the flutes and marimba. The brasses swing the last eight to answers by the saxes. The ending is on high trumpet to a descending figure by the saxes. Just before the war we heard Amor as well as that great melody “Frenesi”. Amor took a long time to establish itself but here to end the first side is a Cugat up-to-date cha-cha version of what is now an established favourite. Side Two opens with a song that broke through because of a dispute over radio music in 1941. Everyone was forced to revive the oldies and Jimmy Dorsey came up with Amapola from the 1920 era. It is followed by El Cumbanchero. Whenever a fast, Latin-flavoured number is needed by dancers, you can be certain that they will find this up-tempo rumba-guaracha a show piece for bands as well as performers. Equally danceable to is Ba-Tu-Ca-Da, a sambo from Brazil possibly not as well known as the other numbers on the record. When you listen you will probably join us in wondering why. Finally comes three of the all-time standards to complete The Best Of Cugat. These three tracks serve a dual purpose: evocation of old memories and admiration for new approaches to their melodies.Â .Misirlon from the Forties, It Happened In Monterey from the Paul Whiteman”King of Jazz” movie of the Thirties, and finally a haunting melody from the great Ernesto Lecuona”Always In My Heart.