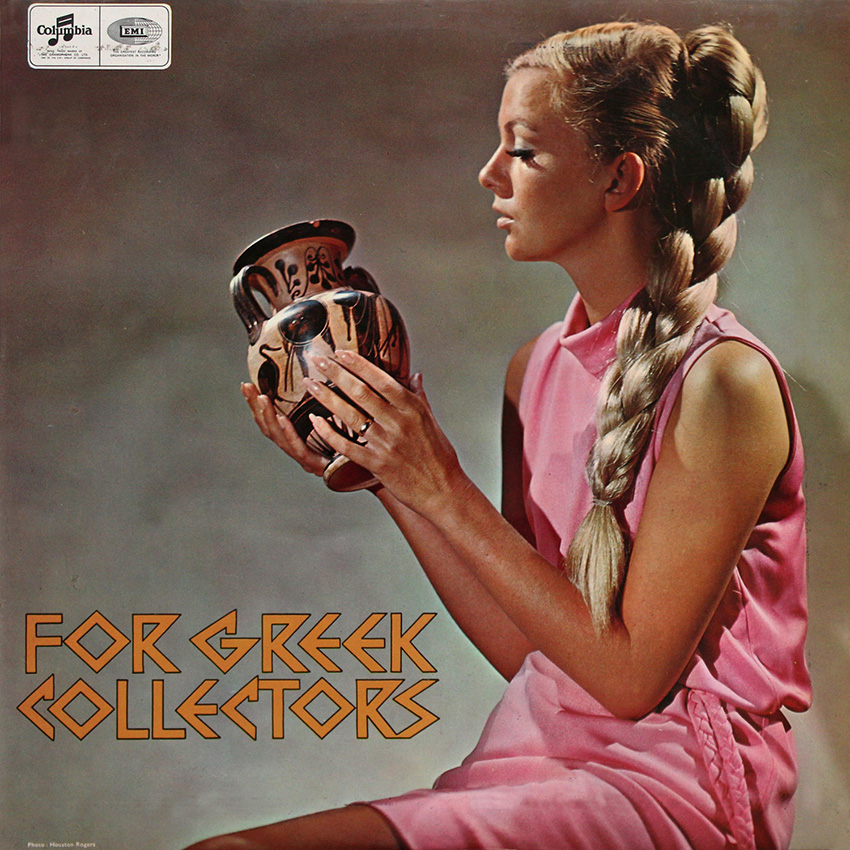 “According to Greek tradition, may your drinking glasses be good and plentiful and may you expertly throw them one by one on the floor, so that they shatter into one hundred tiny sparkling particles, to the happy laughter of a beautiful woman!“
These final notes on the cover of this album convey a philosophy of life that’s hard to argue against.

This album is for those who love and appreciate Greek Laike Moussike. It’s an album for all those who wish to have in their collection an LP with twelve songs each one of them a best seller in its time; music written by prominent Greek composers, songs interpreted by famous Greek singers, and accompanied by top bouzouki players of Greece.

This is a rare collection indeed; and it covers a wide range of themes and tempi; from slow, nostalgic, soulful ballads, to fast, colourful and sometimes amorous, song-dances, brimming with gaiety and pulsating with rhythm and vitality. Let’s look at the contents. On Side One, E KYRA (The Lady) is an evergreen by Manos Hadjidakis for all addicts of the Hassapiko dance. CHRYS-SOPRASSINO FYLLO, is a nostalgic song about Cyprus, which likens the island to a golden-green leaf floating on the blue waters of the Mediterranean. PAI-PAI (Gone is the night) is one of those gay, irrepressible songs for which its composer George Zambetas has become famous. APANO STO MANDILI SOU (On your handkerchief) is another catchy melody with the inimitable Bithikotsis as vocalist. EPOMONI (Patience) is an unusual duct between Grigoris Bithikotsis, the top male singer of Greece and the charming star of theatre and cinema, Alikee Vouyouklaki. Finally, NYHTERINOS HOROS (Dance in the night) an instrumental by Manos Hadjidakis, taken from his successful musical “Street of Dreams”. Zarnbetas plays the bouzouki on this striking melody in 5/8 measure, with his usual vigour and skill.

Side Two begins with another Zrunbetas top hit TA THAKRIA (Tears) sung by Vicky Mosholiou and which for months was number one in the Greek hit parade. MATIA VOURKOMENA (Tearful Eyes) is a new song by Stavros Xarhakos, the youngest of the talented composers to join the new movement of Laike Moussike. TO GHELASTO PETHI is the Greek version of Brendan Behan’s “The Smiling Boy”, and Maria Farandouri, the interpreter is a young singer for whom the composer, Mikis Theodorakis has written many new songs. Bands four and five are strictly for the afficionados of Laike Moustike and I’ll bet six bottles of Retsina to a glass of Ouzo, that the voice of Bithikotsis and the lyrics will send their pulses galloping. The last band is a Theodorakis instrumental in strict Zeibekiko tempo, for those who can’t help dancing to this zestful 9/8 rhythm. According to Greek tradition, may your drinking glasses be good and plentiful and may you expertly throw them one by one on the floor, so that they will shatter into one hundred tiny sparkling particles, to the happy laughter of a beautiful woman
GEORGE ANGELOGLOU