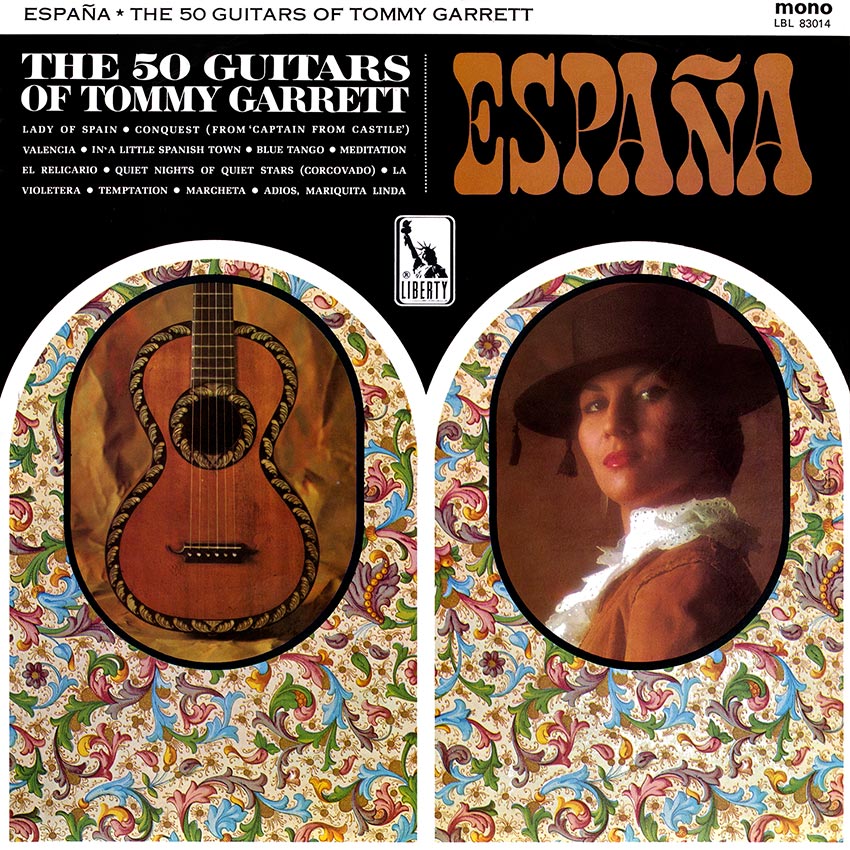 Spain. Or, as the Spanish say, España. Fabled in history and song. Sun-drenched land of wine, mountains, Moorish castles, gipsies, flamenco and the bull-fight. A land whose music accurately reflects its turbulence and hot-blooded emotions. A land where pride, passion, beauty and callousness are mingled and combined like nowhere else in the world. A land which has produced some of the proudest, bravest and most ruthless adventurers and soldiers through the ages.

Men who risked their fives journeying the immense distance to the New World, where they fought and conquered overwhelming odds to wrest fabulous fortunes from the enormous sub-continent which they colonised.

And Spain is the home of the guitar. That evocative, beautiful musical instrument that has been an integral part of popular music of all kinds since the Middle Ages, and which, in its natural, unamplified state, still towers invincibly above all the modem electronic devices and gimmicks which frequently seek to abuse it. As Spain is the home of the guitar, it was both natural and inevitable that Tommy “Snuff” Garrett and his 50 Guitars should pay their respects with an album entitled “España” and including some material with direct antecedence in Portugal, Spain’s neighbour on the Iberian peninsular and kindred coloniser in what is now Latin America.

The 50 Guitars started as an idea of Tommy Garrett, Liberty’s young pop artist-and-repertoire ace. The idea has grown into a colourful series of LPs making musical visits to Latin America, Hawaii and Italy. and winning a large number of enthusiasts in America and other countries of the world Music is a universal language, and the music of the guitar is readily understood and appreciated everywhere. Tommy Garrett has been assembling fifty of the world’s finest exponents of the instrument based in California on increasing occasions to keep pace with the appetite created around the world for LPs by the 50 Guitars, and often the recording sessions are nocturnal ones because this is usually the only way that he can ensure the simultaneous presence of the entire group in view of their many day-time commitments in the film and disc studios of Hollywood and Los Angeles. Many of the guitarists have Latin blood in their veins, and their LPs devoted to Latin music have an extra bonus of verve and colour as a consequence, as this present selection well demonstrates.

Lady of Spain seems more Spanish than many compositions of genuine origin, and it often surprises people when they learn that this perennial standard was actually written by a Welshman, Tolchard Evans. Ernie Freeman’s arrangement opens with some dramatic flamenco chords and the introduction played by Tom Tedesco before castanets herald the pasodoble tempo and the familiar melody. The relaxed beat of the bossa nova affords an appropriately subdued atmosphere for this notable rendition of Quiet Nights Of Quiet Stars (Corcovado) by bossa nova pioneer Antonio Carlos Jobim and Gene Lees. Martial drums and imperious chords usher in Conquest with a haughty flourish suitable for the theme of “Captain From Castile”, and the bossa nova mood returns for another Jobim melody Meditation. La Violetera is a traditional piece which will be easily recognised by tune if not by title, and it is well suited for the massed guitar treatment. The first side closes with a decidedly Hispanic bolero arrangement of a popular Latin American evergreen Adios, Mariquita Linda.

Valencia is another rousing Spanish favourite with exactly the right jaunty lilt for starting the second side, and In A Little Spanish Town, while written by non-Spaniards, is nevertheless in excellent accord with its subject as far as mood and sentiment are concerned. El Relicario brings back the vivid pageantry and dramatic excitement of the bull-ring and its ritual. The tango is as popular in Spain as in Argentina, the country of its birth in its present form, and Leroy Anderson’s example of the blue variety has a cunning trace of cha cha cha woven into this arrangement. Victor Schertzingera Marcheta must have had Spanish blood in her veins to sound as exotically attractive as this when depicted musically in waltz time, and Temptation can be as potent and piquant in Spain as anywhere else in the world, especially when the 50 Guitars are providing the musical background with such a torrid and insistent bolero beat.

Twelve more distinctive tracks from Tommy Garrett’s fifty instrumentalists with solos from Tom Tedesco, and neatly collated under the label of “ESPAÑA”. As before, there are no gimmicks or technical tricks on display. The 50 Guitars rely on nothing more than good material and good instruments played by good musicians, and once again the results reveal that nothing more is needed.