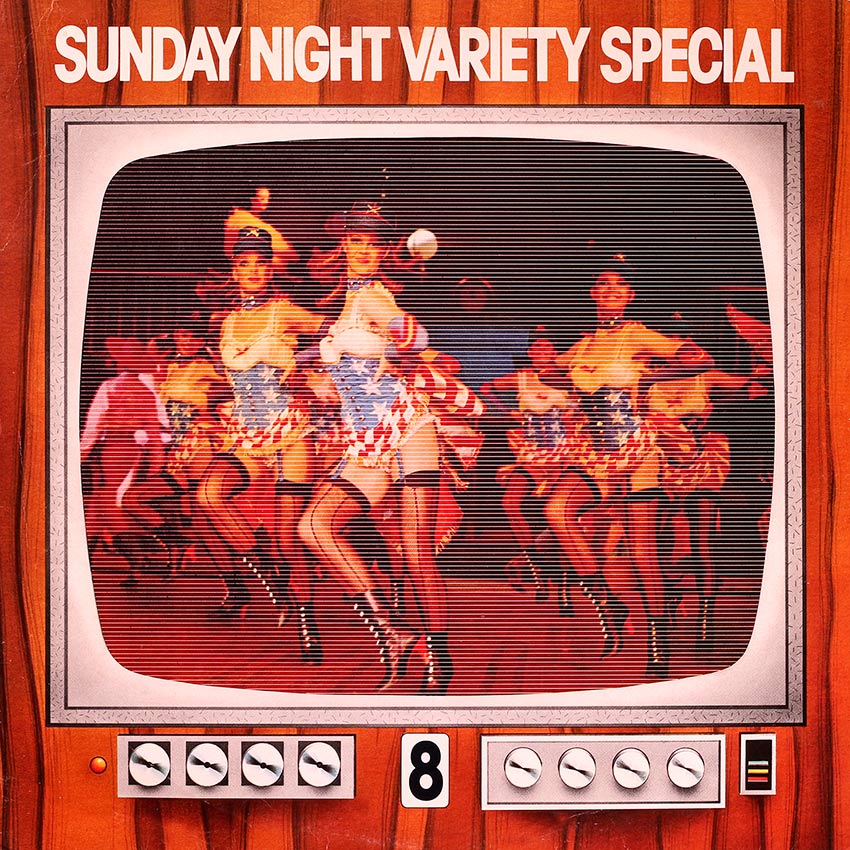 Whatever the composition of the week’s television schedules, at the weekend viewers expect something in the way of a major variety show a large-scale star-studded hour of singing, dancing and comedy as the high spot of the week. It’s a tradition that goes back to the days of the music hall… Friday was payday and the weekend was for fun. On radio the big variety shows were weekend events, looked forward to by the whole family, and television has carried on the tradition. For millions of British viewers, the weekend on TV means some sport, a good film and a glamorous show from the television studios, the Palladium, the Talk of the Town or some other bright-lights location. Often it’s a ‘special’ built around a star like Max Bygraves or Des O’Connor, and that’s the sort of programme we’ve put together for you in the variety spot on our TV Spectacular.

Max Bygraves opens the bill and puts you in the right mood with a medley of favourite singalong numbers, most of them dating from 50 years ago – fine old songs that have been performed in their time by some of the greatest entertainers in the business.

Instrumentals are provided by Acker Bilk, whose easy-going style makes him such a welcome guest on any show… Russ Conway, who revives some great hit-tunes at the piano… and Kenny Ball and his Jazzmen, television regulars on the Pebble Mill programmes.

Glamour, an essential ingredient of such occasions, is assured by the presence and talents of Anita Harris, The Three Degrees and Sandie Shaw. And there’s further variety in the contrasting singing styles of the romantic Des O’Connor, the ebullient Frankie Vaughan and the yodelling Australian star Frank Ifield.

Lonnie Donegan brings humour to his appearance on the bill, and for good measure we have the ‘Opportunity Knocks’ discoveries Millican and Nesbitt, and the Eurovision Song Contest winners, Brotherhood of Man. Truly a variety ‘special’!

Happy Days Are Here Again was written by Jack Yellen and Milton Ager in 1929, for the film ‘Chasing Rainbows: It was introduced on the night of the Wall Street ‘crash: when New York was plunged into financial despair. A song so contrary to the mood of the time had either to flop, or to win over the nation. It was such a success that it eventually became the campaign song of Presidential candidate Franklin D. Roosevelt, and helped to launch a new era of optimism and prosperity. Max Bygraves’ opening medley continues with Powder Your Face with Sunshine a song associated with the post-war star, Donald Peers and then three evergreen popular hits from an even earlier period. I’m Looking Over a Four-Leaf Clover and When You’re Smiling both date from 1927, a time rich in talents and tunes. The stars, like AI Jolson, have gone but many of the songs still have plenty of life in them! Finally, Max sings Put Your Arms Around Me, Honey, written in 1910 by Albert von Tilzer and Junie Macrae. Aria, perforated by clarinettist Acker Bilk, provides a melodious interlude, and then we put the spotlight on popular comedian/singer Des O’Connor for two lilting, sentimental songs.
Gentle on My Mind was composed by John Hartford in 1967 and voted the Best Country and Western Song of the Year. It was a hit for Glen Campbell, and again for Aretha Franklin, but Des O’Connor’s treatment owes more to the relaxed style of Dean Martin. Song Sung Blue is another recent number, written and made into a hit by Neil Diamond, one of today’s foremost composer/performers.
I Love You, Samantha will be remembered by anyone who saw the film ‘High Society: A remake of the non-musical, ‘Philadelphia Story, it teamed Bing Crosby, Frank Sinatra and making her farewell film appearance before marrying Prince Rainier of Monaco the beautiful Grace Kelly. Here Kenny Ball plays the love song in a gently jazzed-up version and his trumpet work recalls the style of another of the film’s attractions, Louis Armstrong. The musical score for the 1956 movie was, of course, by Cole Porter.
Save Your Kisses for Me is the latest hit in our programme, being the outstanding success of the 1976 Eurovision Contest and giving the first big break to the group Brotherhood of Man. Vaya Con Dios, sung by Millican and Nesbitt, was written in 1953 by Larry Russell, Inez James and Buddy Pepper. Originally it was a hit for the guitar-playing husband and wife team, Les Paul and Mary Ford, renowned for their multi-track recordings.
You’re Nobody Till Somebody Loves You was introduced in 1944 by the composer, Russ Morgan, and his Orchestra. Frankie Vaughan, of the straw hat and sophisticated style, gives the song full value in this welcome revival.
Long Live Love was a Number One chart-topper in the Sixties. Written by Chris Andrews, it’s sung here by the girl who made it a hit, Sandie Shaw. Russ Conway is one of the most popular pianists ever to compete with the vocalists for star billing. His two numbers are the title song from the smash-hit musical, ‘Cabaret,’ starring Liza Minnelli in 1972, and I Want To Be Happy, which is from the score of the Irving Caesar-Vincent Youmans’ operetta, ‘No, No Nanette: Sung originally by Louis Groody and Charles Winniger in 1924, it was one of the duets between Doris Day and Gordon MacRae in the 1950 picture, ‘Tea for Two”.
Stardust was at one time the most recorded song on record, with hundreds of different versions of the classic Hoagy Carmichael tune. Since 1927, when it was first recorded by Emil Seidel’s Orchestra with Carmichael at the piano, it has been near the top of everyone’s favourite song list Artie Shaw had the most successful disc, but this performance by The Three Degrees is one of the very finest vocal versions.
Here, There and Everywhere is a Beatles’ composition with a particularly original melody line which has ensured its continuing popularity. Its sung here, with her customary lyricism and charm, by Anita Harris.
My Old Man’s a Dustman is hardly charming, though it has something! The key to its success, and the reason for its periodical revival as a radio request lies in the irrepressible style and sense of fun of Lonnie Donegan. Once a banjo-player in Chris Barber’s Jazz Band, Lonnie wasthe central figure in the great Skittle boom of the 1950s. Since then he has usually been associated with comedy songs and his appearance is guaranteed to liven up any show.
I Remember You was a mammoth hit Number One in the charts for a record period and established Frank Ifield as Britain’s favourite Aussie. Hear again his rich voice and distinctive yodel, in a song he sang on television many times in 1963 and 64.
Mame, the title song of Jerry Herman’s great show, is a number no one can resist whether it’s played or sung! It has provided instrumental hits for the likes of Louis Armstrong and Herb Alpert in the past. It is the sort of number you just can’t ‘follow’ the perfect finale to our Television Variety Special.