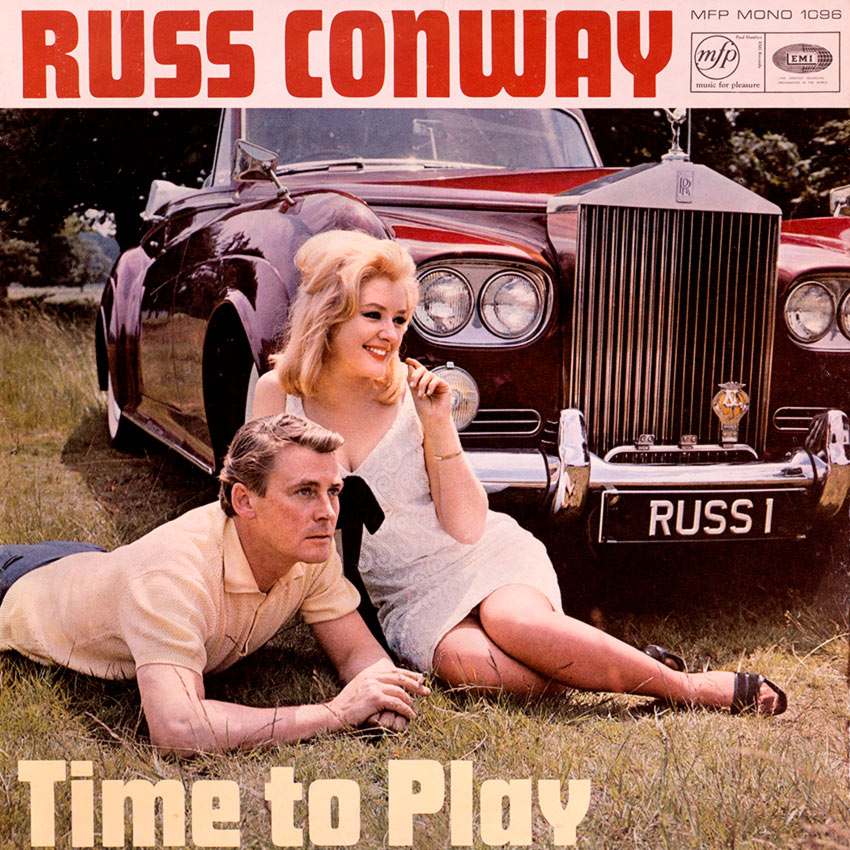 Russ Conway’s story is somewhat more tragic than the sleeve notes convey. Of course the sleeve notes are not the place to describe his propensity for bad luck and they were written long before his fall into alcoholism and depression. Russ Conway had the world at his feet at one point and the cover picture of this recording likely portrays a lifestyle not too far removed from reality.

This is Russ Conway in happiest of moods – pub piano under his fingers. Relaxed, warm, friendly – you can sense the smile, the twinkle in those blue eyes the moment he starts to play. Music to be easy with in true Russ Conway manner; the manner that’s come to be a personal trade-mark on radio, on disc, and to limitless TV audiences on the Billy Cotton (“Wakey Wakey”) Band Show. It’s the manner that marks Russ not only as a top pianist with a rarin’ to go style that’s fresh as paint, but a top entertainer who delights his audiences whether they’re 8, 18 or 85 years old.

Russ Conway was born Trevor H. Stanford in 1927 – a Bristol man. His showbiz career started when he was actually 10 when he made a public appearance with an accordion band at the Bristol Ideal Home Exhibition. But before going into the professional big time he was, among other things: plumber’s mate, salesman, civil servant and barman. Russ also spent about seven years in both the Merchant Navy, starting as a galley boy at the age of 15, and in the Royal Navy – where he was awarded the Distinguished Service Medal.

SELF-TAUGHT MUSICIAN
Cornet, French Horn, Euphonium the 14 year old Russ played them all at Naval Training School, and though piano has always been his first love he also plays the organ. Not only that – he’s completely self-taught in music, too. Playing in a club around 1957 Russ was introduced to an EMI recording manager by dancer Irving Davies who heard him there. He made his debut on disc that April and came up with a seasonal best-seller “Party Pops” the same year. In 1959 Russ received the New Musical Express Award for the outstanding Instrumental Personality of the Year.

GALAXY OF FAVOURITES
On this disc you’ll find all your Russ Conway favourites – all recorded specially for Music for Pleasure. There’s that spanking million-seller “Side-Saddle” along with another of Russ’s hit compositions “Roulette”, chartmakers like “Snow Coach” and oldies like “The Wedding of the Painted Doll” bouncing-bright as a button under the fleet Conway fingers.

A galaxy of old and new tunes bound together by that inimitable freshness, rhythm and sparkle that ensure you stop whatever you’re doing, start your feet tapping, lift your head and say to yourself: ‘That’s Russ!’

They say that all work and no play makes Jack a dull boy. What, then when your work-time’s all playing time? One thing’s certain – when it’s Russ Conway who’s got time to play, there’s always time to listen!