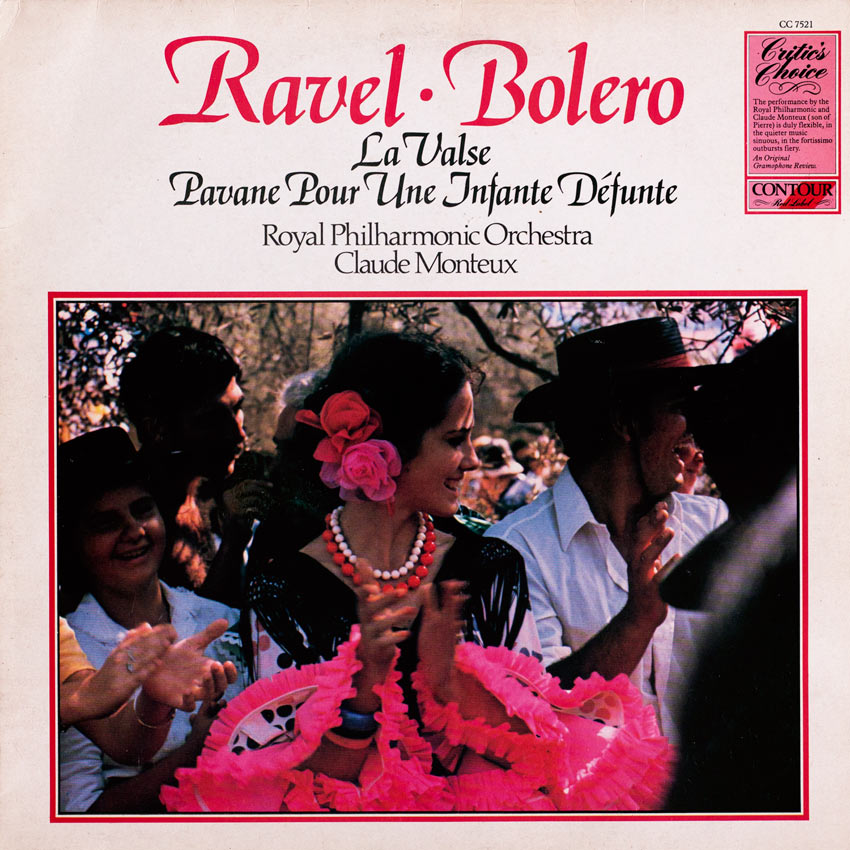 SIDE 1: BOLERO
SIDE 2: LA VALSE PAVANE POUR UNE INFANTE DEFUNTE
The three works on this record encompass the whole of Ravel’s creative career: nearly thirty years separate the Pavane from the Bolero but while the latter piece undoubtedly shows greater mastery, the earlier one is already wholly characteristic, and could not be mistaken for the work of anybody else. Ravel belongs to the small number of composers (Berlioz being another case) who found their own style almost at once.

The choice of these three pieces is also characteristic in showing Ravel’s partiality for stylized dance forms, two of which (Pavane and La Valse) are set in a historic past enhanced by poetry. Moreover, the Pavane and Bolero both belong to Spain, the country of Ravel’s mother, a few miles from which he was born, and a permanent source of inspiration to him, as shown by L’Heure Espagnole the orchestral Rhapsodie Espagnole, Alborada del Gracioso and the three songs Don Quichotte a Dulcinee that were to be his artistic swan-song.

The Pavane pour une Infante defunte composed in 1899, is the earliest work by Ravel to retain real popularity even to-day. Its first version, for Piano, was performed by Richardo Vines at a concert of the Paris Societe Nationale in 1902. Ravel orchestrated the piece as late as 1910, and it was heard in its new guise at the Salle Gaveau on Christmas Day, 1911, Alfredo Casella conducting. The title chosen by Ravel is very much in the spirit of the then fashionable fin de siecle symbolism, and its alliterative charm has a tinge of preciosity about it. Indeed, it is reminiscent of some titles by Erik Satie, though Ravel, in the present case, does not imply any irony. This was the time of Maeterlick’s subdued and mysteriously remote plays, showing pale and fainting creatures dying of languor in dark medieval castles. But Ravel warned the performers against any over-dramatization, stressing that he had not written a funeral memorial: “Do not overestimate the title’s importance. This is not the mourning for an Infanta who just died, but the evocation of a Pavan such as a little princess could have danced it, in olden times, at the Spanish court.” Indeed, the very rhythm of the Pavan has a nostalgic and poignantly retrospective quality that was felt by many composers before Ravel: witness the stylized Pavans by many seventeenth century composers, including Purcell, written as pieces of absolute music at a time when the dance had long since become obsolete. Ravel’s more immediate predecessor was his teacher Gabriel Faure, whose lovely Pavane is imbued with the same haunting sadness. With its long, winding melodic line, with its exquisite modal harmonies enhanced through its wonderful pastel-like scoring, Ravel’s Pavane is likely to cast its spell for many generations to come!

La Valse is quite another matter, and ranks with Ravel’s most powerful and intense utterances. The definite article “La” indicates that the composer wished to create an archtype, synthesis of the Waltz, embodying its various musical and expressive aspects. As early as 1909, he had been planning a symphonic poem called Wien but the first result of his fascination with the Waltz was the delightful set of Valses nobles et sentimentales completed in 1911 and soon staged as a ballet. In 1917, Ravel passed a contract with Diaghilev for a new ballet (their first collaboration had resulted in Daphnis et Chloe, one of the peaks of the Ballets Russes), but the composer, high-strung by the events of the first world war, had to find a secluded place in the mountains of south-eastern France in order to recover. There, during the winter of 1919-1920, he delivered himself of the final version of La Valse which became a deeply tragic utterance, and was to remain, alongside with the later Concerto for the Left Hand the only piece in which he laid bare the innermost recesses of his strangely complex personality. Diaghilev, who probably expected a merely brilliant and entertaining piece, was baffled by this unexpected dramatic outburst, and curtly turned it down. La Valse which met a triumphal reception at its first concert performance (Camille Chevillard conducted the Lamoureux Orchestra on December 12th, 1920), was eventually staged at the Paris Opera eight years later. Ida Rubinstein danced to Fokine’s choreography.

But Ravel’s phantasmic and nightmarish vision shall ever transcend any materialization. It belongs to the dark realm of Freudian psychoanalysis, and throws a crude light upon the soul’s innermost recesses. About the extraordinary opening, with its truly cinematographic technique of fleeting pictures, its fugitive alternations of light and shade, its hazy chiaroscuro Ravel wrote the following “programmatic” comment: “Whirling clouds discover through short clearings glimpses of waltzing couples. As they gradually dissolve, an immense hall filled with a whirling crowd is unveiled. While the movement appears more clearly, the light also increases, to become a sparkling illumination.” The setting is “an imperial Court around 1855”, at the time of crinolines and candle-light. But the vision is not a happy one, nor does it ever reach the status of concrete reality. One cannot but conjure Baudelaire’s verse about couples wheeling “under the whip of lust, that merciless tormentor”, in the Schattenhaft of his Seventh Symphony Mahler had been first in turning the Waltz into a stifling nightmare. By choosing it to express his anguish and to exorcise his war memories, Ravel certainly thought of hungry and poverty-stricken post-war Vienna, with its imperial glory turned into ashes. Strangely enough, all the critics who commented about the first performance (and most favourably!) only retained the piece’s picturesque and entertaining aspects, failing to perceive its tragedy. Mengelberg was first in sensing under its exasperated truculence the Dance of Love and Death it really is.

Love and Death, set in some country inn in burning Spain, are also the basic inspiration of Ravel’s most popular and most misunderstood masterpiece, the Bolero. This was written in 1928 at the request of Ida Rubinstein, who first danced it at the Paris Opera on November 22nd of that year. Owing to an exclusivity contract, it had to wait until January 11th, 1930, to receive its first concert performance, soon followed by hundreds of others the world over. The greatest conductors soon adopted it as their most spectacular show-piece, and Toscanini’s performance remains famous for the fast tempo, the only one to recall the speed of the popular dance which inspired the composer. This, however, was not what Ravel had in mind. He invented a long melody, whose rhythm and intervals, meant to create a state of obsession, stylize Spanish (and to an extent Cuban) folk-music, so as to keep but its organic substance: again, as in La Valse, Ravel planned and achieved an archtype. The melody breaks down into two symmetric halves of sixteen bars each, the first in C-major, the second on the verge pf the minor mode. It is the only subject-matter of the piece, which consists of a set of purely orchestral variations, leaving the melodic line untouched, and only adding new harmonies alongside with new instruments. Starting with two lone flutes above a soft drum-tap, the music gradually builds up to one of the most powerful orchestral crescendi in music-history. Again, as in La Valse the musical and the sexual obsession are inseparable. A Spanish gypsy dances, roosting on a low table, ever more possessed by the maddening strains of the unescapable melody. In the darkened inn, the men gather around her, tormented with desire, under the monotonous spell of the voluptuous incantation. It seems as if nothing could ever save them from their fatal numbness. But as the climax of unbearable, aching tension, comes the work’s masterstroke, the unexpected and withal unavoidable modulation into E-major (the only one in the whole piece!), after which the orchestra, falling back into the original key, collapses in rapid exhaustion. The Bolero remains the wildest wager a composer ever risked. Ravel himself described it in his usual ironical way: “It is my masterpiece; unfortunately there is no music in it!”

This is a sally, of course, and the final modulation owes its electrifying effect to all that has been heard before, and which makes the Bolero an unexcelled model of orchestral virtuosity and controlled power. It remains one of those rare pieces to reconcile the widest popular acclaim and the discriminating admiration of the connoisseur.
Harry Halbreich.
© Text The Decca Record Co. Ltd.
Reference is made on the front of this record sleeve to the review of this recording, Gramophone October 1971