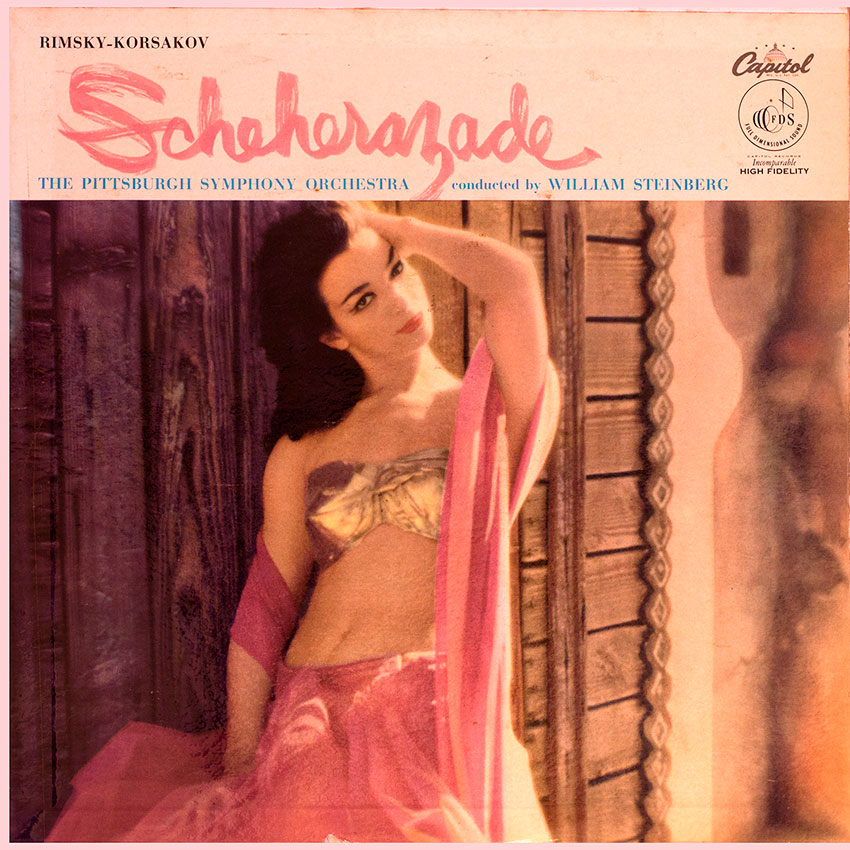 In the year spanning 1887 and 1888, Nicolai Andreyvitch Rimsky-Korsakov managed to produce three symphonic tributes to three separate lands — his own Russia, Spain, and the Land of Make-Believe. The Russian Easter Overture (Opus 36) and Capriccio Español (Opus 34 ) both offered glittering festival music.

But the elements of pageantry, excitement and sensuality found even more triumphant expression in Opus 35 —which is Scheherazade. Rimsky always regarded this work with special interest and affection, suspecting perhaps that here he had created his immortal monument.

The career of Rimsky-Korsakov got off to a singularly unpromising start.

In the Navy circles in which, as a midshipman, young Rimsky moved, he was conceded to be indifferent officer material but a first-rate musician.

Among musicians, he was rated a rather bad pianist.

On reaching his twenty-first birthday in 1865, Rimsky had yet to decide just where he belonged. He loved the sea; but the dull, vulgar, and inhuman life with the Tsar’s Imperial Navy depressed him. And although he possessed an unmistakeable musical gift, Rimsky’s disposition was better suited to being an aristocratic young dilettante than to study, practice, and serious composition.

Yet, from such lean beginnings finally emerged one of the most astonishing talents in music!

Of the group of rebellious Russian composers later to be immortalized as the Mighty Five, Rimsky is considered by many as the mightiest. Balakirev, Cui, Moussorgsky, and Borodin made up the rest of the coterie. These five young men were the musical manifestation of the drive toward nationalism which all Russia was feeling at the time. Together they waged war on traditional “conservatory” music, as symbolized to them by Rubinstein and Tchaikovsky. Each of the five had his special genius to contribute. But none of the group (and, indeed, very few composers before or since) addressed himself with such success to the imagination of his listeners, as did the composer of Scheherazade.

It is to the lasting credit of Mili Balakirev, leader of the young dissidents, that he saw beyond Rimsky’s ignorance of harmony, notation, and the use of the musical instruments themselves. With a teacher’s intuition, Balakirev guessed at Rimsky’s latent greatness and goaded his protege to abandon mere musical dabbling. Not only was such waste of talent an abomination, but the Mighty Five needed a major musical work with which to gain recognition and stature. Thus Rimsky-Korsakov’s First Symphony, performed in 1865, was also the group’s first public testament.

The audience applauded, then gasped, as the composer was brought out onto the stage wearing his Naval uniform! But by September of the same year, Rimsky’s sailing days had ended, and he settled down to work in St. Petersburg. As he learned, he composed. And as he composed, he learned. Two fresh works: Sadko (1867), a symphonic poem; and the opera, The Maid of Pskov (1868 ) further established his success.

Yet he was scarcely prepared, in 1871, for an incredible stroke of luck: his appointment to a professorship at the St. Petersburg Conservatory. Urged on by his friends (particularly by Balakirev who jumped at the chance to plant one of his rebels in the hostile Conservatory), Rimsky accepted the post. Had he known a little more about music at the time, he would have been appalled at the magnitude of his own inadequacy. When the realization did smite him, it was too late to back out.

By diligent application and brilliant bluffing, Rimsky managed to hide his ignorance from his students and, eventually; to keep one jump ahead of them. As the composer explains: “… having been undeservedly accepted at the Conservatory as a professor, I became one of its best and possibly its very best pupil!”

He was engrossed in some revisions of Borodin’s Prince Igor when he received the inspiration for an orchestral piece derived from and suggesting the exotic tales of the Arabian Nights. And, in the summer of 1888, the symphonic suite in four movements — entitled Scheherazade, was completed.

In all of music it is hard to single out another composition equalling Scheherazade’s power to liberate the imagination of the listener and send it flying by magic carpet to the strange and wonderful world which Rimsky-Korsakov conjured up—a land of Oriental splendor—of djinns and magical fantasies-of heavy-lidded princesses — glistening Nubians — cruel Caliphs — beautiful slave-girls dancing and stamping their little belled feet in the crowded bazaar.

Each listener, according to his special mood and fancy, may improvise symbols of his own — just as did the composer of the music and the choreographer of the famous ballet based upon it.

For Rimsky-Korsakov intended his tone poem to be evocative rather than narrative. The “kaleidoscope of fairy-tale images”— as he himself characterized it — shifts from one to another with no continuing plot.

The titles of the four movements: The Sea and Sinbad’s Ship; The Kalander Prince’s Tale; The Prince and the Princess; The Bagdad Festival and the Ship Dashing Upon the Rock Surmounted by the Bronze Statue of a Warrior — serve mainly as thematic cues. The combined effect of these four movements is a melodic reflection of some of the tales by which the Sultana Scheherazade —over a period of A Thousand and One Nights — charmed her surly husband, the Sultan Schahriar, out of the notion of executing her.

The first violins establish the theme of Scheherazade as narrator. This same theme, repeated and embellished, leads to other musical figures and to other images. Wood-winds, horns, harp, cymbal, and tambourine take their turns assembling the mosaic of sound and enchantment.

Here is magnificent proof of Rimsky-Korsakov’s pain-fully acquired virtuosity. Every symphonic ornament is exhibited in this satisfying work, as though the composer had challenged not only himself but the orchestras and. conductors who would perform it. A concert showpiece from the day of its debut, Scheherazade makes exacting demands, ranging from pianissimo solos to its fortissimo climax and exploiting all of the colorations and shadings of musical sound.

No amount of repetition can diminish the vitality of such a composition. It brings something new and wonderful to all who hear it for the first — or for the hundredth — time.

WILLIAM STEINBERG is justly celebrated as one of the foremost conductors of our time. Coming to the United States in 1938 with a European reputation of the highest order, he has since distinguished himself with equal success and acclaim on this continent. His memorable appearances with most of the nation’s major symphony orchestras are climaxed now in his permanent conductorship of the Pittsburgh Symphony Orchestra, with which he displays the full scope and sensitivity of his magnificent talent. Among their recordings are these works:
BEETHOVEN: Symphony No. 6 (“Pastoral”) P-8159
SCHUBERT: Symphony No. 2 Symphony No. 8 (“Unfinished”) P-8162
STRAUSS: Till Eulenspiegel Death and Transfiguration P-8291
BEETHOVEN: Symphony No. 5 Symphony No. 8 P-8292
RACHMANINOFF: Symphony No. 2 P-8293
TCHAIKOVSKY: Serenade in C Major PROKOFIEV: Classical Symphony P-8290
TCHAIKOVSKY: Symphony No. 5 in E Minor P-8325