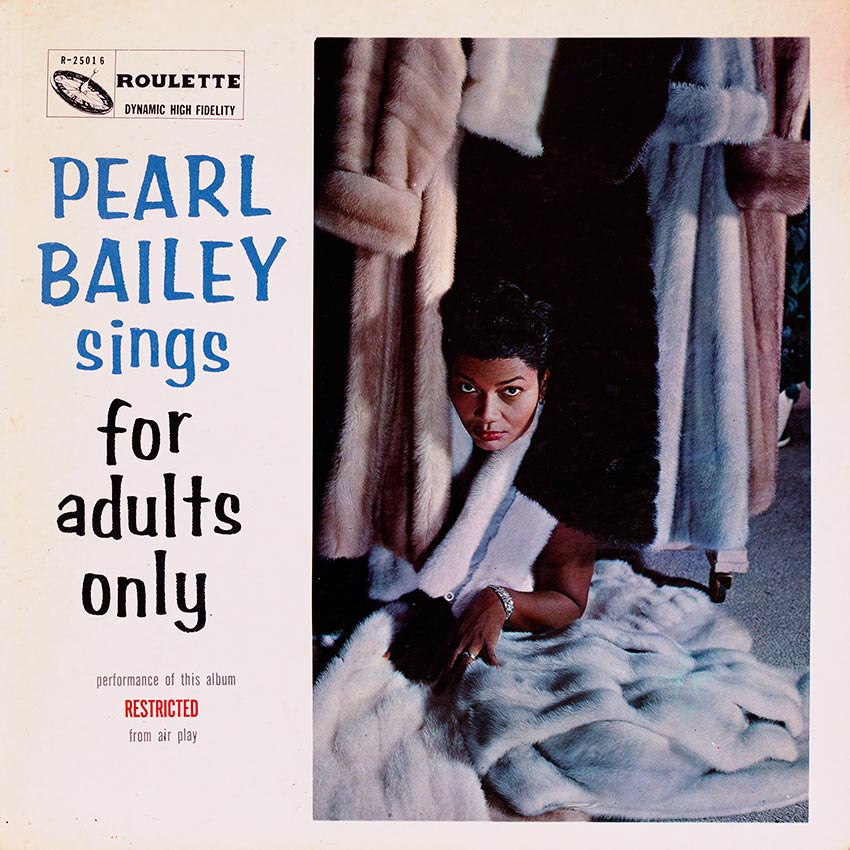 The reason for the dual personality is Pearl’s attitude toward life. Within the confines of an intimate night club she was able to fashion in song a portrait of a girl who knew the facts of life but who inevitably got her facts all mixed up. In sketching this girl, Pearly Mae (as she is known to friends) threw in asides and bits of business to the delight of night club goers who don’t to have pictures drawn for them about the facts of life. It was in this respect that the night club Pearl Bailey and the recording Pearl Bailey had to part company.

The recording companies preferred to play their Pearl Bailey straight. That was the only way to get her recordings played on the air. “Stick to the script” was the order of the day so Pearl had to shelve the innuendo and double entendre that made her so popular with the night club crowds.

Now, for the first time, the night club performer and the recording performer have become one and the same person. This album is Pearl Bailey’s night club performance come to life on a record. That’s why it is labeled “For Adults Only” and that’s why it is restricted from air play. It’s a precaution that Roulette has taken to protect the innocent from her earthy wisdom.

Pearly Mae has been around and knows what life is all about and she’s completely uninhibited about letting every-one in on what she’s learned. That’s why the innocent and/or uninitiated must be kept away. There’s no telling what disastrous effect she could have on them.

There’s a certain disenchantment about the way she faces life that can only be appreciated by those who have been through a mill or two themselves. But despite this disenchantment she faces life with a sardonic humor and a hunger for more. She creates more than just a warm-hearted girl who has been done wrong. She’s a girl who doesn’t want to do right. There seems to be no fun in that; for her, anyway. She knows about the pitfalls of romance but makes no pretense of avoiding that road to destruction. She knows that it will probably end in disaster, and it usually does. But she’s not surprised, in fact she wonders why it took so long. And before she’s in the last chorus, you know she’s ready for another encounter with the opposite sex.

In someone else’s hands this woman would be a pitiful soap-opera creation. As etched by Pearl Bailey, the character is wise, winning and full of good humor. And the innocent must be kept away from those who find humor in living.

There have been songwriters, too, who’ve written about life to suit Pearly Mae’s wry indignation. The blending here of songs and stylist is perfect. Legalize My Name, of course is a Bailey natural, but so is I Wanna Get Married, Let’s Do It, She Had To Go And Lose It At The Astor and Flings. And for those who worship at the shrine of the late Lorenz ( Larry) Hart (& Richard Rodgers), she’s included the memorable Zip from “Pal Joey” and To Keep My Love Alive from “A Connecticut Yankee.” These and the others in the set are done in her inimitable night club manner. As evidenced here, as in the clubs, she is the complete mistress of timing and when a throwaway line comes to her mind, it is thrown in with no holds barred.

Although the night clubs give her the most freedom of expression, Pearl has made excursions into Broadway and Hollywood. In the theatre she’s appeared in “House of Flowers,” “St. Louis Woman,” “Arms and the Girl” and “Bless You All,” while her screen credits include “Carmen Jones” and “That Certain Feeling.”

This album, however, is the Pearl Bailey of the night club – with no minimum and no cover charge.