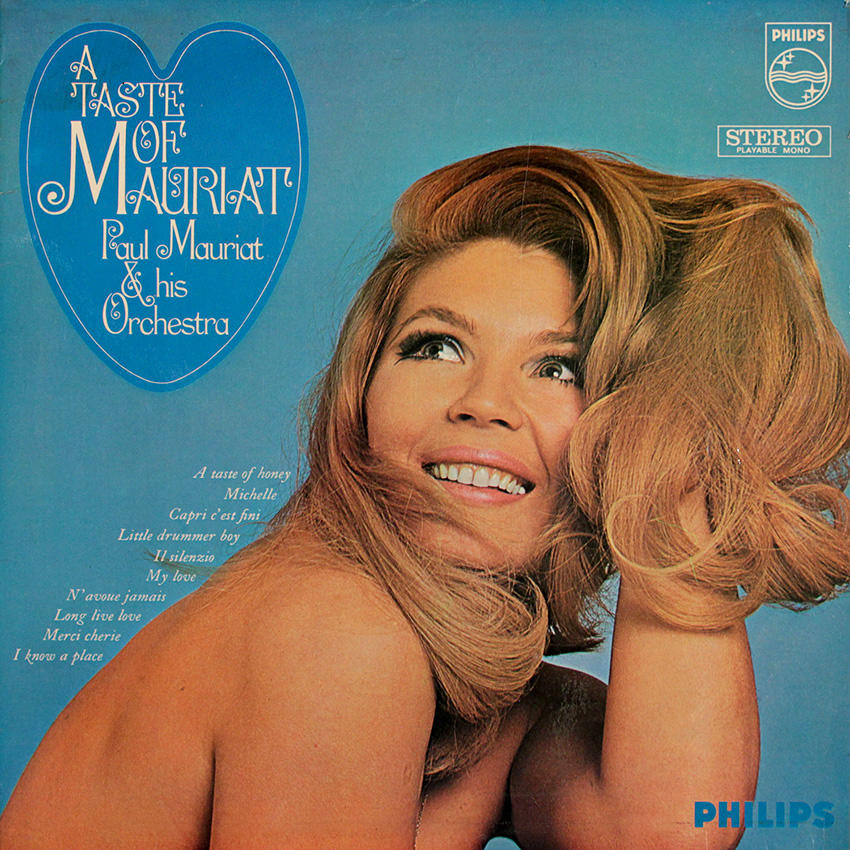 Paul Mauriat was a hugely successful easy listener purveyor on a par with those other giants of the easy listening genre Bert Kaempfert, James Last and Herb Alpert. His canvas was popular hits of the time and on many of his albums he covered many Beatles songs. In fact one such album, released in Japan, was devoted exclusively to Beatles songs and the cover was a pastiche of the Fab’s “Let It Be” cover. Japanese audiences loved Mr Mauriat, he was the only international artists to sell out the Budokan stadium twice in one day.

For those who are perhaps having their first taste of Paul Mauriat in this LP here are some tips for catching the full flavour. Try it tonight with your coffee after dinner, relaxing in a softly lit room. First let the warm romantic bouquet of the music drift round you before you sip at the individual tracks and savour them, for they have subtle gradations of flavour – each one excitingly different, yet all unmistakably vintage Mauriat. You will find, as in all fine liqueurs, that the basic sweetness is counterbalanced in every number by a special piquancy which lingers warmly long after the track is over. Like Mauriat himself, it is something very French yet as completely international as fine champagne or cognac. A lot goes into the fine blend of a Mauriat arrangement for the Mauriat orchestra. The connoisseur, who recognises Mauriat’s music as something unique in the world of popular music, can sense ingredients that have been maturing for a lot longer than Mauriat’s lifetime. This dual element in his arrangements, for instance – this element of contrast with a small group of instruments such as guitars, piano and harpsichord in the foreground adding the piquant element to the larger body of strings (hear it on the first track “A taste of honey”; – has roots in the concerti grossi of the seventeenth-century composer Corelli and of Handel and in the Brandenburg Concertos of Bach. Surprising?

Not really, for Paul Mauriat is one of a handful of creative men in the world of music who might be described as total musicians. It is a handful that includes such names as Leonard Bernstein and Andre Previn. Each is a classical musician who is completely conversant also with the music of our own time-with jazz and popular music. They do not see music divided up into superior and inferior types. For them there is only good music and bad music of whatever kind. But things being what they are, each has had to have a base camp. Bernstein and Previn have made their base camps in classical music. On the other hand Mauriat, a conservatoire graduate at 14 who seemed then to have an assured future as a classical concert pianist or conductor, decided to settle in the field of popular music. How much popular music has benefited from Mauriat’s classical background becomes apparent when you examine his arrangements closely. Take that harpsichord in “Michelle,” for instance. Mauriat is well aware of the unique texture of the sound of the harpsichord (which is not as many people think a kind of primitive piano but instrument which produces its sound by plucking strings instead of hammering them) And he knows how to use a to best effect. Merely using it at all tells us something about the mastery of Mauriat’s orchestral writing. One might think the delicate sound would be lost in the sound of a big orchestra, but the mark of good orchestration is that every part that is written, down to the tiniest triangle tinkle, should make a positive contribution – and be heard. That is the kind of principle that marks Mahler’s brilliant orchestral writing in his vast symphonies, it is the kind of principle that applies in a Mauriat arrangement – this is a test he never fails. But there is lot more to his blend than that. Mauriat puts to full use his long experience and wide knowledge Jazz and Pop music. The way he can make a big orchestra swing when he wants to suggests an intimate knowledge of the work of the big bands in the swing era of the ‘thirties and perhaps some keen listening to the way Count Basie uses his piano, guitar, and drums tightly and efficiently to generate swing. Nor is Mauriat too proud to learn from the younger generation’s pop styles Listen to the hypnotic electronic beat in “Capri c’est fini” and the clever electronic effects in his piano presentation of another “slow rock” number “Il silenzio”. Listen, too, to the way Mauriat uses his instruments like human voices, particularly his ever-singing strings And listen. too. to his vividly delicious -Long live love-this is part of the essence of Mauriat. It is, in fact, very much the music of today and in all these things we can recognise the touch and feeling of a master musician. But analysing Mauriat’s music is a little like analysing a fine wine chemically On this record we could mention the fact that he has brought together an international blend of melody from various periods, memorable themes by leading composers in France, Italy, Germany. America, and Britain-and, of course, those most international of popular composers. Lennon and McCartney, for whom Mauriat has great respect. But that, in its tum. is like identifying the vineyards and the vintage when what really matters is that he has made them into something very specially his own for our lasting pleasure. It is after all the final quality of the finished blend that counts, and whether you are sampling for the first time or have already developed a connoisseur’s palate for Mauriat’s music, this collection has the kind of quality that is sure to make you want more of the very special taste of Mauriat.