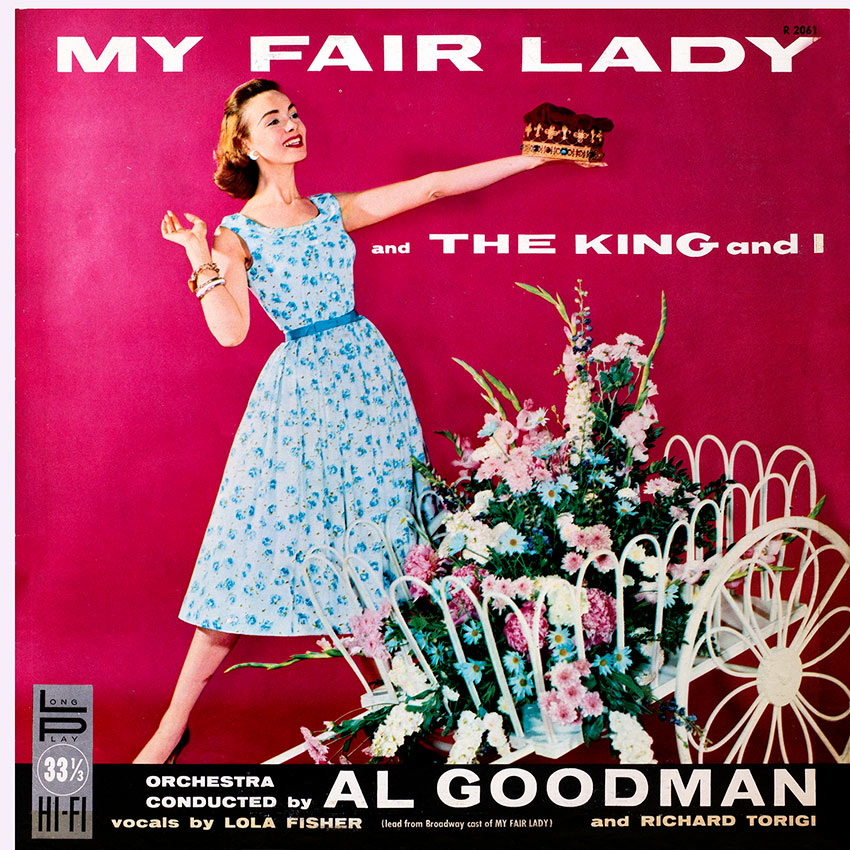 My Fair Lady, a musical adaptation of Bernard Shaw’s Pygmalion, is beautiful, delightful, tuneful and funny, that even the great “Shaw” would have approved this production.

Henry Higgins, an English professor, is taking notes on British dialects. He is especially impressed with Eliza – a Cockney flower-girl. He tells Eliza that he and his friend, Colonel Pickering, can teach her to speak like a lady, and become successful as a shop-owner and not remain a flower-girl.

The next day she appears at the professors home to ask him to teach her proper “English” and he agrees. However, her Cockney ways and ideas almost make the professor give up his experiment. However, Eliza learns correct pronunciation and the professor introduces his “protege” to society at the Ascot Races. At the races she attracts the attention of Freddy Eynsford-Hill, a wealthy Englishman, who follows her home hoping to see her again.

After months of hard work, Eliza is ready for the great experiment. She is taken to a ball where she is a success. The people at the ball assume she is of great wealth or nobility.

The professor and his friend are elated over their successful experiment and completely for-get their “protege”. Eliza, hurt and angry, leaves the house and runs into Freddy. Freddy professes his love for Eliza.

The day after the ball, the professor realizes that Eliza is gone. He finds Eliza at his mother’s home where she has gone for comfort and sympathy. The professor offers Eliza a truce which she refuses.

On his way home, he thinks about the way she has affected his life. Later in the evening as the professor sits quietly at home listening to a recording of Eliza’s voice, Eliza returns “home.”

Also received immediate acclaim by public and critics alike immediately upon its opening March 29, 1951. Here was another achievement of the team of Rodgers and Hammerstein, creators of “Oklahoma!”, “South Pacific”, “Carousel and other triumphant musical pro-ductions that have made their names synonomous with beautiful music.

Rodgers and Hammerstein have that rare ability to integrate the score with the theme. In “The King and I” which is an adaptation of Margaret Landon’s “Anna and the King of Siam”, Rodgers and Hammerstein capture every emotion from humor to pathos in their melodious tunes, yet continue to maintain an accurate musical picture of the situations in the play. How lovely are “Something Wonderful”, “Getting ;o Know You”, Shall We Dance”, and how truly in-dicative they are of each situation they present. This album of “The King and l” will occupy a cherished part of your music-listening hours.

AL GOODMAN famous conductor and musician has devoted all his life to music. His love for music and his inherent musical ability were manifest at an early age when he sang soprano in his father’s choir, became a musician in the pit of a local “movie house”, and was awarded a scholarship to the Pea-body Conservatory in Baltimore.

In 1915 Al Goodman was selected by Earl Carroll to accompany him to California as arranger and conductor. That was Goodman’s official entry into show business . . . the start of an illustrious musical career which brought him into personal contact with the all-time “greats” of show business . . . as the conductor of many shows and musical productions whose successes were due in great measure to his outstanding ability. Al Goodman produced musical comedies with Earl Carroll . . . never-to-be forgotten hits like “So Long Letty” and “Canary Cottage”. He became Al Jolson’s personal conductor and arranger, then J. J. Shubert made him general musical director and composer of all Shubert musical productions.

He later became associated with various Radio and TV Shows as musical consultant and director such as the Hit Parade & the Colgate Hour. In his wide and varied career he was associated arranger, conductor, recording artist or musical supervisor for about 200 famous musical shows and programs. He has worked with the biggest names in the history of Broadway: Earl Carroll, Al Jolson, George White, Sigmund Romberg, Jack Benny, Fannie Brice, George Jessel, Flo Ziegfeld, James Melton, Max Gordon, Bob Hope, and many, many others. The name of Al Goodman, arranger, conductor, musician is one of the brightest lights of show business on Broadway.

TECHNICAL DATA (RIAA)
The recording you have just purchased was made on an Ampex Tape Recorder, Model 600, with Altec and Telefunken Microphones. The Masters were cut on a Scully Lathe with Grampion Feedback Cutter Heads driven by specially designed 200 Watt Amplifier. Mastering was done with maximum stylus velocity consistent with minimum distortion realizing the ultimate in signal to noise ratio. Although the total frequency range of 16 CPS to 20,000 CPS on this record is not within the range of ordinary hearing, microscopic examination will reveal the etchings of the upper dynamic frequencies. However, it is the opinion of the producers of this record that the inclusion of these inaudible frequencies does convey a certain warmth of tone that is lensed by the listener rather than usually heard.
This recording may be played on any 331/3 RPM record playing instrument; but the wide range and fine technical features incorporated in this record will be most fully realized on playback equipment of extremely high fidelity.
Low Frequency Limit 16 CPS High Frequency Limit 25,000 CPS Crossover 500 CPS Rolloff 13.75 DB at 10KC

HOW TO PLAY THIS RECORD

In order to enjoy this recording to its fullest, set the volume control at the point at which the sound seems to fill the room and is not objection-ally loud.
The Bass Control should be set so as to pick up only the fullness and mellowness of the rhythm instruments without thumpy reverberation.
The Treble Control is set for best results when the music comes through without a static interruption and the sound comes through without distortion.
Naturally a diamond stylus will in-sure more perfect sound reproduction but this record will provide hours of enjoyable listening when played with any other type of reproducing styli.