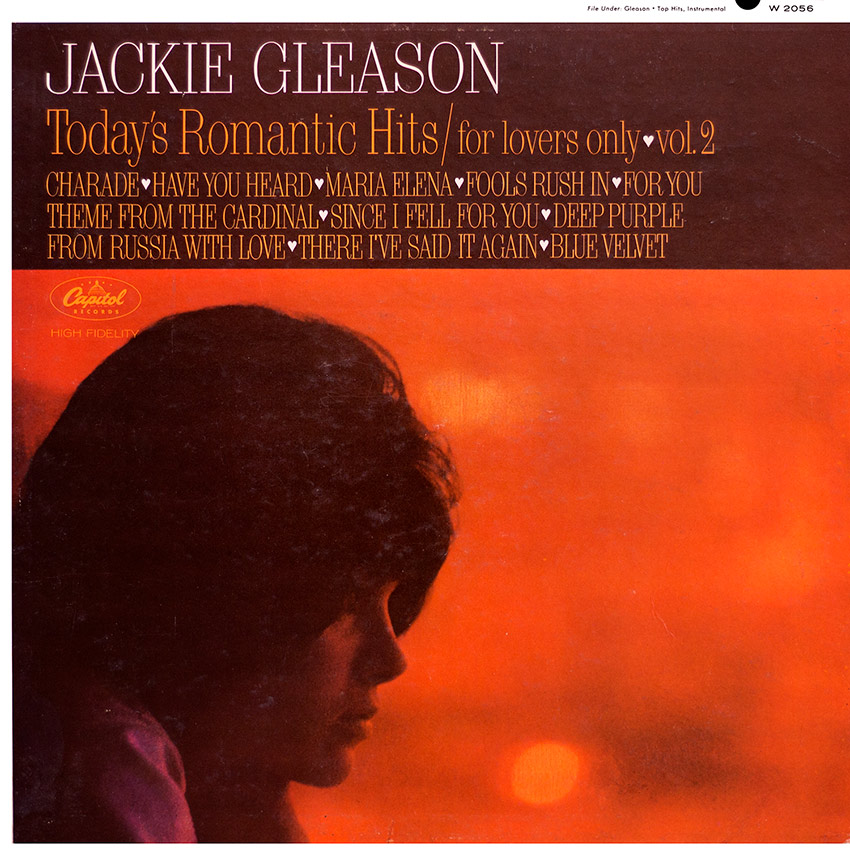 When Jackie Gleason began recording his phenomenally popular albums of lush, beautiful mood music back in the early ’50’s, he chose most of his selections from among the finest, most romantic “standards” of the day. People loved Jackie’s interpretations, and even the earliest of those albums is still heard constantly on radio and in homes all over the world.

But the Great Gleason—comedian, conductor, actor, impresario, bon vivant—has never been one to let time pass him by. So his newest albums have brought that same rich touch, that same fine taste, to music that is at the top of today’s popularity lists.

This album, for example, features three new movie themes that match any to have come along in many a season: Charade, From Russia With Love, and Theme From “The Cardinal.” Added to these are some of the best of the new ballads—such favorites as Have You Heard and Since I Fell for You—plus some that are a bit older, but are even more popular now than before. These current revivals include such marvelous melodies as For You, Maria Elena and Deep Purple, the more marvelous for the beauty of the Gleason orchestra.

The orchestra is actually two-in-one—twin string sections, doubly rich, doubly romantic, backed by a rhythm section, with accordion, English horn and oboe. And to complete the Gleason magic. there are two great soloists alternating on the various selections: Charlie Ventura on tenor saxophone and Pee Wee Erwin on trumpet, adding those special touches of free-flowing charm that make this the kind of music that lovers love and understand.
Arrangements by GEORGE WILLIAMS
Produced by DICK JONES