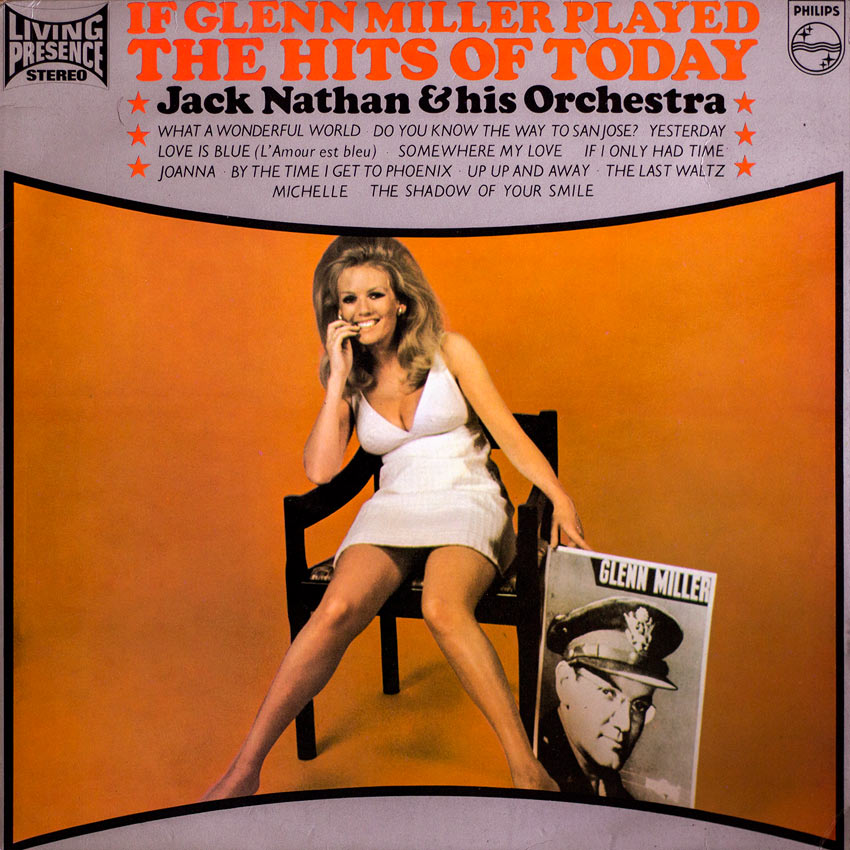 For many years people have been asking when the big bands will make a return to the music scene and nearly always adding … ‘and what would Glenn Miller sound like if he were playing today’s hit tunes’. Well of course, no one knows the answer to either question one can only guess.

Shortly after his disappearance in 1944 the Glenn Miller Orchestra was reformed with great success and to this day it still undertakes a 52-week year itinerary of concerts, one -night stands, college dates, etc. They have toured several countries — many will remember their British tour in 1958. Nowadays, to satisfy the young fans – the modern counterparts of the ’40s – they play music ‘a la Mode’.

The popularity enjoyed by his original style has also prompted quite a few bandleaders to voice their opinions as to how his music would sound today.

Jack Nathan, one of the most respected and versatile musical directors in Britain most of his time is spent between recording studios. TV. radio and film studios was an obvious choice to interpret his own ideas for a recording of the quality tunes from today’s hits. This record is the result. All the arrangements are by Jack himself and, together with the cream of Britain’s top musicians the line-up reads like a Who’s Who of British Jazz the end product is one of the most satisfying and pleasant albums heard for a long time. Trombonist Nat Peck was another ‘obvious’ for this session, having played with the great Glenn Miller Allied Expeditionary Forces Orchestra, the early post-war Miller Band, and because nobody in Britain knows the Miller book like he does.

The Miller styling has been faithfully reconstructed the introductions, the thrill, reed sounds that send shivers up and down your spine, the dooh wah brass, the velvet sounds of the trombones they’re all here for your listening enjoyment. It is fashionable these days to feature the music of Lennon and McCartney, Tony Hatch, Bert Kaempfert, Burt Bacharach and other composers of the new generation. Fashionable or not, they are good tunes, the sort of memorable melodies Miller himself had the knack of choosing.

Nostalgia undoubtedly plays a large part in the continued popularity of the Miller music. However, it certainly doesn’t account for the thousands of new fans who couldn’t possibly have heard the original band in its heyday. It is records such as this, tastefully arranged and played, that provide a great link with a style of music that will always be remembered and played. Whether you like dancing to this music or just prefer to sit hack and listen, this record is for you.