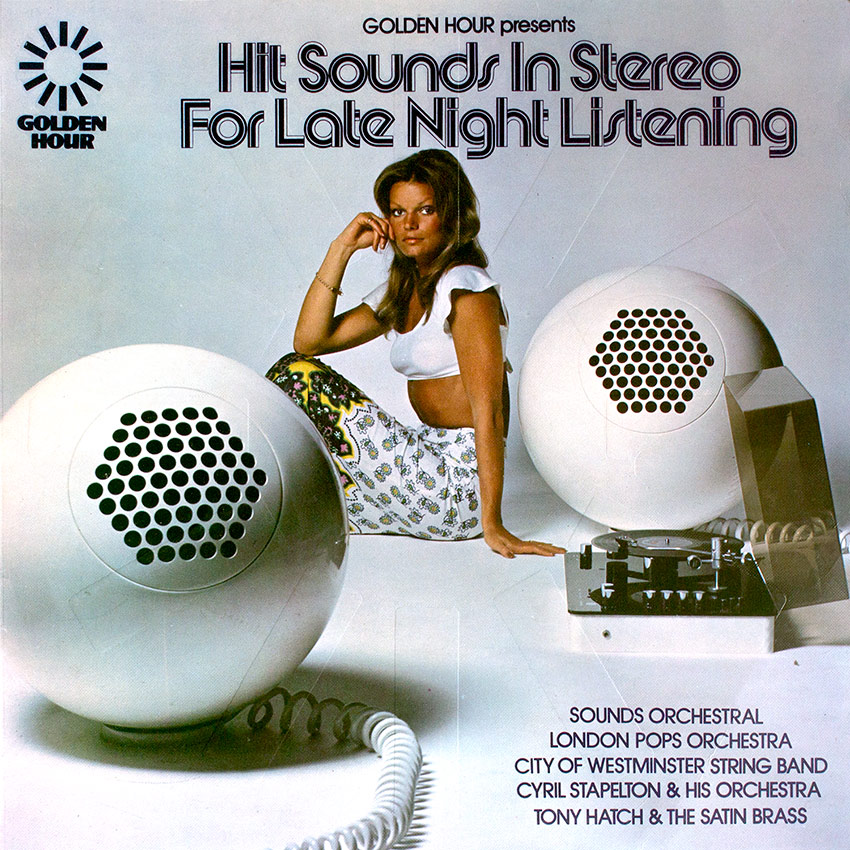 Programmed to suit most tastes in light orchestral music. HIT SOUNDS IN STEREO FOR LATE NIGHT LISTENING offers you, the listener, 18 Top 20 titles beautifully interpreted by five of the country’s leading orchestras.

The LONDON POPS ORCHESTRA sets the mood with Joni Mitchell’s ‘Woodstock’ and follows through the album with fine arrangements of ‘Albatross’, ‘He Ain’t Heavy, He’s My Brother’ and their version of the song ‘Can’t Help Falling In Love’, which gave Andy Williams a sizeable hit a few years back.

TONY HATCH, who has himself had a long line of hits as a composer puts down his pen and picks up the baton on this occasion to lead the SATIN BRASS in Lennon and McCartney’s Hey Jude’, Something’ written by George Harrison and Bacharach’s soulful ‘This Guy’s In Love With You’.

When it comes to perfection CYRIL STAPLETON has been around long enough to know the right musical ingredients to tempt even the most fastidious record collector. Cyril’s Orchestra can be heard playing ‘Wandering Star’, from Paint Your Wagon. Hank Mancini’s ‘Moon River’ from Breakfast At Tiffany’s and from The Sound Of Music ‘Edelweiss’.

I Can’t Let Maggie Go’ is the first track to be heard on this album by the CITY OF WESTMINSTER STRING BAND and you may well recognise it as the theme used in a T.V. commercial. Also to be heard are We’ve Only Just Begun’, ‘You’ve Got A Friend’ and to close the record the band have chosen another Andy Williams’ hit ‘Home Lovin’ Man’.