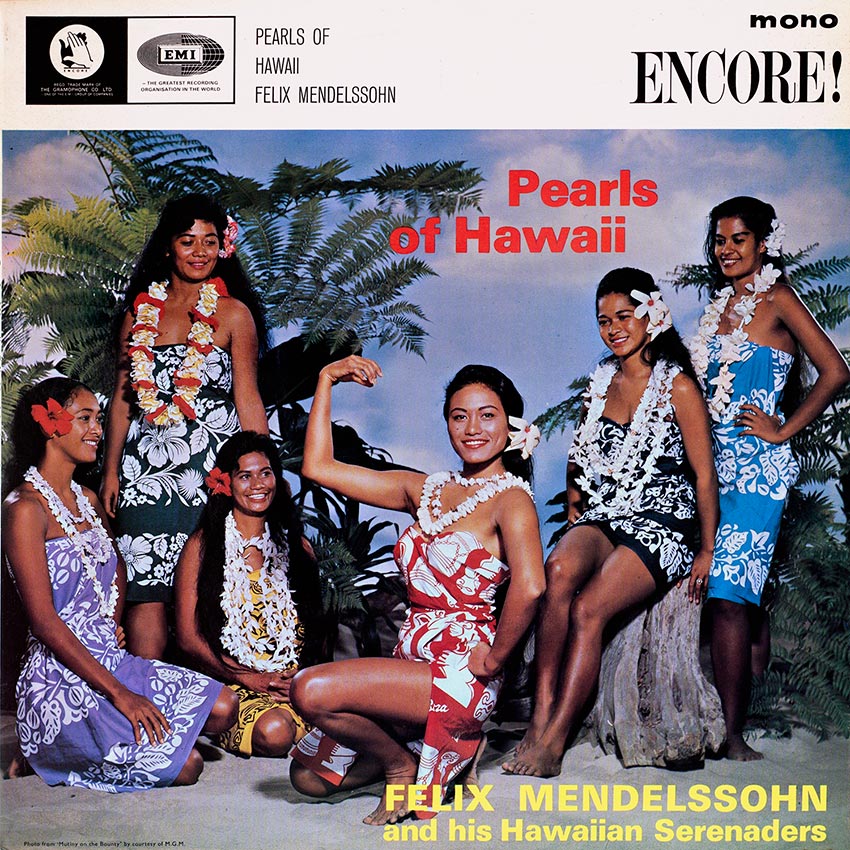 There can be few sounds more evocative of a place than the music of Hawaii. The soft, undulating melodies conjure up an image of the sun, the blue sea and the golden beaches. During his lifetime Felix Mendelssohn devoted his time to bringing those musical scenes to British audiences and the happy, carefree atmosphere of the Pacific Islands is captured again with the issue of these sixteen titles. To most people living in Britain, Hawaii seems like some make-believe dream world created by Hollywood and the picture-postcard manufacturers.

In fact, Hawaii is the largest of eight main islands comprising the Hawaiian Islands located near the centre of the Pacific Ocean. The picture of wonderful beaches, tropical flowers and hula dancers is a true one as far as it goes but there is more to the Hawaiian Islands than the immediate tourist appeal. Hawaii is proud of the fact that on August 21st, 1959, it became the 50th U.S. State, while on the island of Oahu, one of the group forming Hawaii, is located the American naval base of Pearl Harbour. Throughout the entire year the average temperature on the islands never drops below the lower seventies while surfboard riding, deep-sea fishing and swimming are some of the main pursuits of visitors. The visitors—the Hawaiians refer to newcomers as Malihinis, incidentally—are invariably captivated by the extreme friendliness of the people and the fabulous array of flowers (including the famous night-blooming cereus). At a luau, or Hawaiian feast, the visitor is likely to be offered poi, a paste made from the root of the taro plant, to say nothing of such exotic local fruits as pineapple, papaya, guava nectar, passion-fruit juice and papaya juice. Small wonder then that many of the Malihinis find the inducement so strong that they become Kamaainas, or old-timers!

Anyone who has ever visited Hawaii is likely to find that the music of Felix Mendelssohn will bring memories flooding back. Perhaps it will recall a particularly colourful Hukilau, or community fishing festival or possibly a trip to Honolulu’s Upside-Down Falls where a heavy rain dashes over cliffs and is blown upwards instead of falling downwards. Maybe My Isle of Golden Dreams will remind listeners of unspoiled Molokai, one of the smaller islands of the group where wild deer roam freely through pine-apple plantations. But even if Hawaii is only a fantasy world to you then we guarantee that the music of Felix Mendelssohn and his Hawaiian Serenaders will bring sunshine and colour into your home.