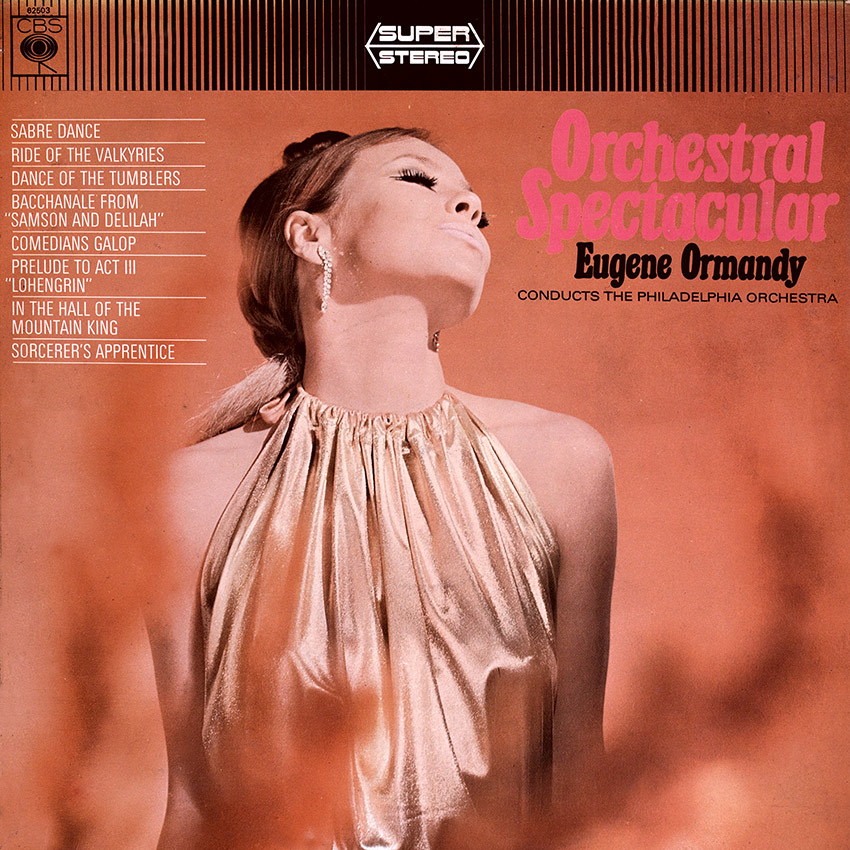 The eight selections performed here represent out-standing peaks of musical achievement in which the composers pull out all the stops and use the combined resources of that formidable body known as the full orchestra to underscore or actually convey a dramatic scene. Melodic suggestion and paraphrase, the infinite varieties of tonal colour, the sweep and interplay of instrumental contours, the soloist or special ensemble against the backdrop of the larger group—these are some of the devices employed. In these pieces however they have been employed so well, so brilliantly, that the selections have assumed a role and validity of their own. They are in fact among the most stunning examples of musical imagination—no less enduring for the music lover for their sonic grandeur, and no less appealing to the sound enthusiast for their solid musical content.

What I call the “total performance” approach of Ormandy and the Philadelphia Orchestra—in which maestro and players combine to translate the sonic fabric as well as the musical content of a piece—is eminently suited to recreating these eight masterworks. Producer Thomas Frost and the CBS engineers have spared no effort to produce a recording which, to the ears of one not familiar with these works, will probably come as a revelation—to the listener already familiar with them as a rediscovery.

First comes the Sabre Dance from the suite Gayaneh by the contemporary Russian composer Aram Khacha-turian. Sinewy and bubbling with vigour, it is—like the other dances in this ballet—based on Armenian folk themes, treated and orchestrated in a distinct and characteristic style, and exemplifying a dazzling tour de force for the symphony orchestra.

The Ride Of The Valkyries, which opens Act III of Wagner’s Die Walkare, depicts the ascent of Wotan’s warrior maidens as they carry slain heroes across their steeds through a gathering storm to their mountain meeting place. The awesome,, pageantry of this scene is echoed in brilliant brass and percussive effects.

The Dance Of The Tumblers is a particularly light-hearted excerpt from Rimsky-Korsakov’s otherwise sad opera The Snow Maiden. The pace set by the tumblers—somewhat slow but nonetheless vigorous—creates large fireworks that burn long but go off with a bang!

In the Bacchanale, which occurs in the last act of the opera Samson and Delilah, Saint-Saens unleashes a torrent of rhythmic episodes that conveys a blend of orgiastic revelry and pagan ritual celebrated by the Philistines. The dance’precedes the savage climax when Samson, his strength restored, topples the pillars and sends everything crashing down.

The Comedians is probably the best-known work in this country of another contemporary Russian composer Dmitri Kabalevsky. The Comedians’ Galop played here is the second of ten numbers comprising the suite. The distinctly modern orchestration assigns the main theme to the xylophone, with a lively interplay of woodwinds and brass.

Wagner’s Prelude To Act III from Lohengrin sparkles with the glint of gold and a kind of stately exuberance. The heroic main theme, carried by the brass, is inter-spersed with a more sedate—almost solemn—motif.

From its slow, deliberate beginning In The Hall Of The Mountain King carries the listener through a series of intensified dynamics, faster tempos, and increasingly complex orchestration to its spectacular finish.

The Sorcerers Apprentice by Paul Dukas is as popular today as it proved to be at its first performance in Paris in 1897.
NORMAN EISENBERG