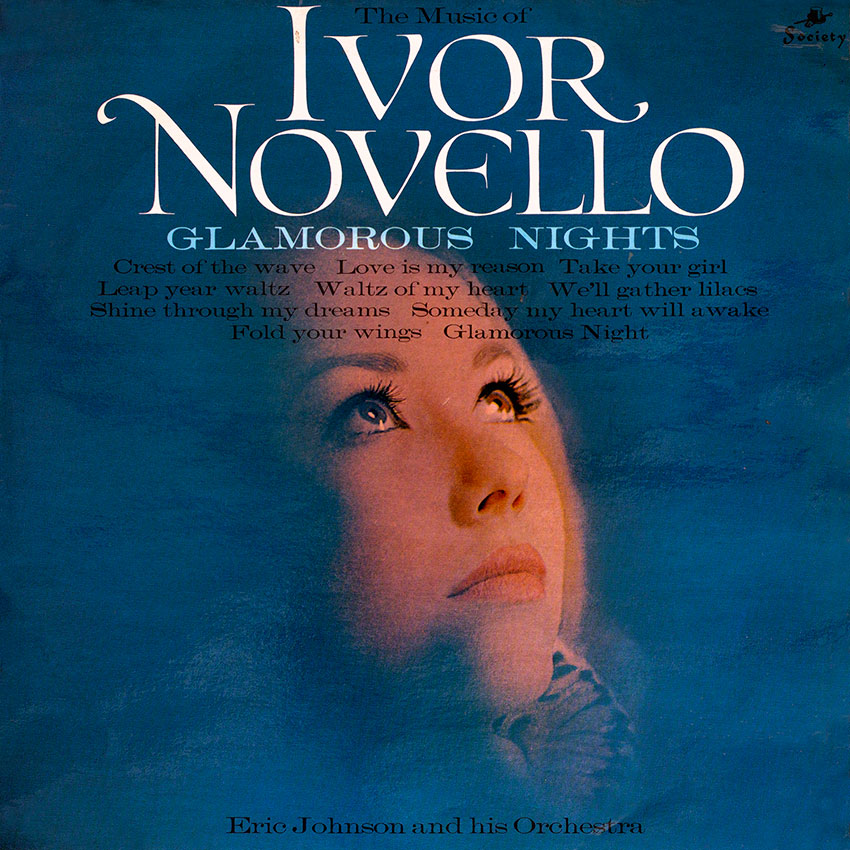 Ivor Novello, son of a distinguished actress, decided at a very young age to make the theatre his life, and was fortunate in having his name brought to the notice of the public right at the start of his career. This was in 1915 when he wrote the patriotic song “Keep the home fires burning”. He followed this, six years later, by music for the sophisticated revue, “A to Z”, which opened inauspiciously at the Prince of Wales Theatre during a heat wave, but which held on until its success was assured and which contained the number, “And her mother came too”, which soon became the rage of London. In 1924 he wrote a satirical number, “The Rat Step”, a sidelight on the somewhat ridiculous dances then in fashion, as well as music for the revue, “The Punch Bowl”.

However, it was undoubtedly in the sphere of the spectacular musical that Ivor Novello became known and loved by millions of theatre-goers. For some years it had become increasingly difficult to find the right type of show to fill the vast Drury Lane Theatre for a reasonable run. On May 2nd, 1935, his first large scale musical, “Glamorous Nights” opened there and was an immediate success. One of the chief contributions to this success was clearly the musical score, which rapidly built up a great popularity among light orchestras and the larger dance bands. Thereafterwards, until the outbreak of the 1939-45 war, Ivor Novello was ready with a new spectacular show
whenever business showed signs of slacking off, and in yearly succession produced, “Careless Rapture”, “Crest of the Wave” and “The Dancing Years”, the Drury Lane run of the last only being interrupted by the outbreak of hostilities, but was soon to re-open at the Adelphi Theatre where it played continuously until after the end of the war. All of them had much in common—a lush score played by an orchestra with an opulent string section, a heavily romantic plot and a setting which was usually in some Ruritanian kingdom, with the composer himself playing the monarch or prince as required. During this period he also somehow managed to find time to take the chief part in the staging, at His Majesty’s Theatre, of the musical version of Max Beerbohm’s “The Happy Hypocrite”—one of the most exquisite and tasteful productions seen in pre-war London, and in which he presented Vivien Leigh for the first time to a delighted public, while he himself played the role of Lord George Hell.

After the war, he transferred his activities to the Hippodrome (“Perchance to Dream”) and tO The Palace Theatre, where the equally successful “King’s Rhapsody” was produced in Septerliber 1949, while his last production was a light-hearted musical comedy, “Gay’s the Word”, which he wrote for his friend of many years’ standing Cicely Courtneidge, and which opened at the Saville in February 1951.

No appraisal of Ivor Novello would be complete without reference to his many additional successes both as an actor and an author of straight plays—he was truly a man of the Theatre. Among the most successful were those light comedies which starred the most accomplished actresses of the day—such as the delightful “Fresh Fields” in which Lillian Braithwaite and Ellis Jeffries demonstrated the role of the comedienne to perfection.

Ivor Novello was much respected in the world of the theatre, and was very loyal to the stars he made famous and to his company. One has only to think of Vanessa Lee, Roma Beaumont and Olive Gilbert, among others, whom he brought before the public.

His sudden death, after no illness, on March 6th, 1951, came as a great shock not only to the world of the theatre, but to the general public to whom his name had become a household word. Every star of the London theatre, as well as many thousands of the public, flocked to his funeral, for it was understandably felt that his death had removed much of the sparkle from the London scene.