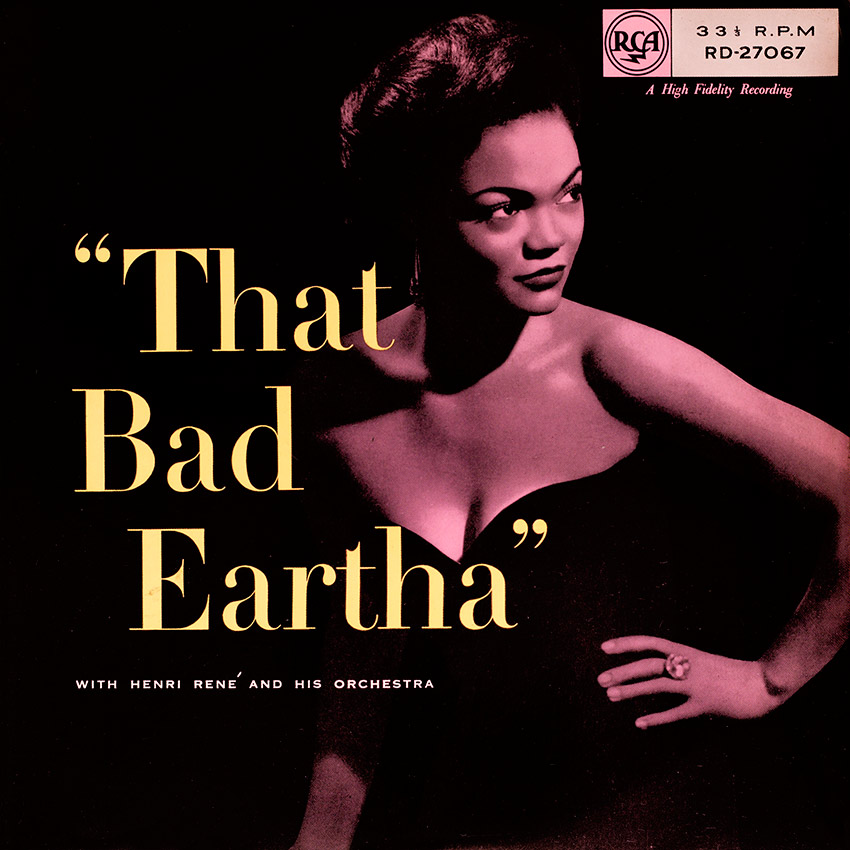 Actually the only person competent enough to write these program notes for Eartha Kitt would appear to he Mr. Roget – he of Roget’s Thesaurus – or perhaps Mr. Noah Webster. But even having all the words in the English language at one’s disposal is hardly a guarantee that the Kitt Story can be adequately told. She started out life on a desperately poor share-cropper’s farm in South Carolina and grew up in a miserable Harlem tenement house, helping to support herself and her aunt by working long hours as a seamstress in a uniform factory. In her early teens she discovered that she was endowed with an unusual talent for singing and dancing; and although, superficially, she seemed no different from the countless other poverty-stricken children in Harlem, she dreamed in the good old American tradition that she, Eartha Kitt, the unknown waif, would shoes them – that some day she would be a dazzling entertainer and the toast of continents.

And show them she did, to a degree which can be described with understatement as fantastic. At the age of sixteen she met, more or less by accident, the famous dancer Katherine Dunham, who tools one look at Eartha’s inspired, self-trained dancing, gave her a scholarship, and signed her for the next tour. In 1948, she performed in Mexico fort, then London, Paris and the continent. Finally, with typical Kitt initiative, she decided to go it alone in Paris, where her success was overwhelming.

Thus began the Eartha Kitt legend, and no press agent could have written such madly enthusiastic notices about any client as the effusions of praise which broke forth from her bedazzled audiences in Paris and subsequently Turkey, Egypt and Greece. A staid member of the Rouse of Lords shook his head and remarked in a dazed voice that she was “an arrangement designed to unhinge men’s minds”. Porfirio Rubirosa, renowned connoisseur of such matters, sighed and muttered that she was “fire in ice”, whatever that may mean exactly. Orson Welles made her Helen of Troy in his production of Faust and loudly proclaimed that she was “the most exciting woman in the world”! And the Maharajah of Cooch Behar summed up the Eartha-rized feelings of most mots when he “bayed” (in the words of a bemused writer) that he was “utterly destroyed” by this seething young enchantress!

This album gives some indication of Eartha’s vocal talents her dancing and acting, of course, would require special descriptions elsewhere. Here she offers interpretations, complete with the tantalizing and characteristic Kitt vibrato, of a dozen songs, each one different in mood from the others, and including selections in English, French, Spanish, Turkish and believe it or not in Swahili, one of the leading languages of East Africa! Whether it’s in the rhythmic malevolence of I Wool to Be Evil or in the reflective Lilac Wine, in the irresistibly scheming C’est si bon or in the tender African Lullaby, Eartha reveals that she is an interpreter of songs almost any kind of sang who can only lee called unique.
Notes by Duncan McDonald.