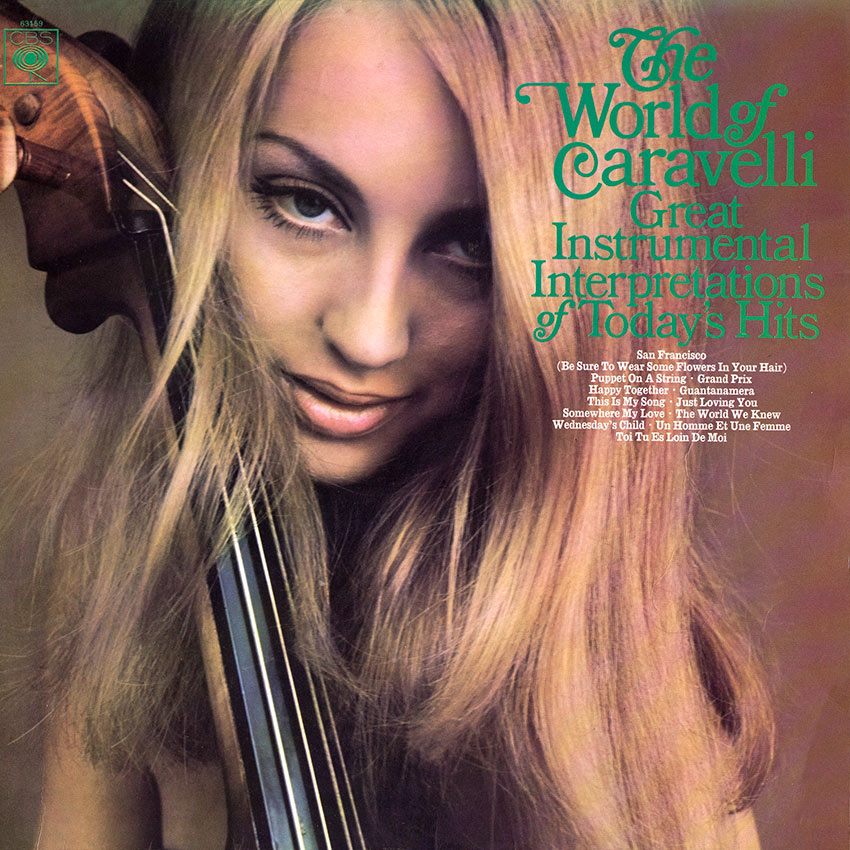 It’s very much an international hit parade these days, with songs from nearly every country in the world at times, all fighting hard to win those coveted places high up in the top twenty.

This latest Caravelli album has taken due notice of the trends, of course. In bringing you this happy selection of recent hits the Maestro has picked a round dozen of the best from at least half as many countries and has given them all that magic Caravelli treatment.

Setting a romantic mood to open side one, we begin with one of this year’s most haunting new melodies. John Phillips of the Mamas and Papas wrote ‘San Francisco’ which proved to be a Number One hit for Scott McKenzie. Also from across the Atlantic comes an old Cuban song, which turned up in the Pete Seeger repertoire and recently scored for the Sandpipers. That’s right, we mean ‘Guantanamera’.

European writers are well featured throughout this album. From Britain’s Martin and Coulter comes ‘Puppet On A String’ which took them, and Sandie Shaw, right to the top at Monte Carlo in the ’67 Eurovision Song Contest. John Barry is heard, too, in ‘Wednesday’s Child’, which he wrote for the film ‘The QuiIler Memorandum’.

Maurice Jarre, the French film composer whose ‘Lawrence Of Arabia’ score was and is so popular has two of his more recent compositions included. On side one you will find an up-to-the-minute treatment of his ‘Grand Prix’ theme, and on side two a nostalgic setting for the ‘Doctor Zhivago’ love theme ‘Somewhere My Love’.

Germany’s Bert Kaempfert is here with ‘The World We Knew’, this one given a fresh, glowing arrangement, and the theme from one of the more memorable French films of late, ‘A Man And A Woman’ proves Francis Lai well worthy to be included.

Finally, from our Venetian-born Maestro’s own talented pen comes ‘Toi, Tu Es Loin De Moi’, the last but by no means the least track in this exciting new and cosmopolitan collection of Today’s Hits freshly presented in the inimitable Caravelli manner.