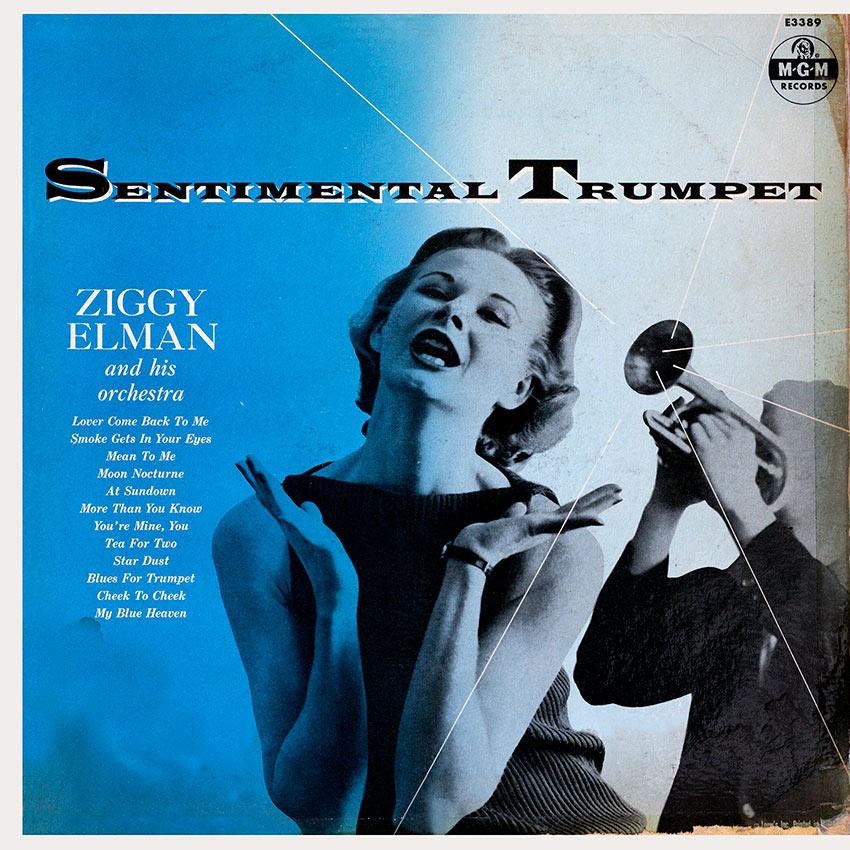 “Sentimental Trumpet” – the sweet, soaring trumpet of Ziggy Elman, of course—and moody music-making designed for either relaxed listening or a bit of intimate, cheek-to-cheek dancing by the side of your record player!

The mood is on the nostalgic, quiet side—one for memories or memory-making. Not that Ziggy doesn’t brighten the listening here and there with a warmish solo flight or some beatful bluesy swing. That happens here and there for a bit of welcome contrast. But, mostly “Zig” sticks to the designation of the title and his orchestra follows along as his horn sings sentimentally tunes you know and love in a fresh and endlessly entertaining fashion! Along the way here you’ll encounter many an old favorite tune of yours. There’s Jerome Kern’s unforgettable LOVER COME BACK To ME, setting the note of sentimentality. Then comes Mr. Kern’s wonderful SMOKE GETS IN YOUR EYES. From the pens of Roy Turk and Fred Ahlert comes MEAN To ME. And, for a trumpet showcase, Zig presents the haunting MOON NOCTURNE. Remember AT SUNDOWN, MORE THAN You KNOW, YOU’RE MINE, You, TEA FOR Two (the last a Vincent Youmans favorite)? They’re here in stellar performances in the inimitable Ziggy Elman manner. And so is Peter DeRose’s immortal STAR DUST. For a change of pacing, there’s BLUES FOR TRUMPET. But, back to standards with CHEEK To CHEEK (Irving Berlin, of course) and the evergreen MY BLUE HEAVEN. That’s the musical line-up for you here. Sit back in your easy chair and relax or get on your dancing pumps —either way you’ll find Ziggy’s “SENTIMENTAL TRUMPET” oh, so inviting and oh, so memorable!

In the world of music, Ziggy Elman occupies a lasting place of prominence which has been attained by few. His golden trumpet has weathered the changes of many a musical style and taste and trend—and, in the latter case, Ziggy has started off on its way many a trend on his own. A musical child, he first attracted attention to his gifts when at the age of six he began, unprompted, identifying notes as they were picked out at the piano. In his youth, he mastered successively the trumpet, trombone, clarinet, sax and practically every other instrument you usually find in a band. Benny Goodman, who gave him his featured start in the band business, got Ziggy to pin himself down to a horn and stick to it. As featured soloist with the B.G. band, Ziggy won himself more fame and acclaim than most band-leaders do. At one time or another, he has placed first in nearly every newspaper and magazine poll held in this country as America’s No. 1 trumpet man. While with Goodman, Ziggy was featured on scores of B.G. records, the most famous of which was probably the one which bore a composition of his own called “And The Angels Sing”. After an ailing Benny Goodman disbanded his great band, Ziggy passed on to another famed side-man post with the Tommy Dorsey aggregation, where he became a valued assistant to the bespectacled maestro with the trombone. A stint in the Air Corps came along during the war and after that Ziggy re-joined the T.D. band, until its temporary disbandment. At that point, Ziggy organized his own band of renown. In recent years, “Zig” has alternated between fronting this group and various musical chores in Hollywood and generally on the coast. He is tall, dark, personable, exceptionally modest, likeable—his friends term him “a regular guy.” He’s married and the father of a boy named Marty Joe. Aside from his trumpet, his second love is a camera—he’s a shutter fiend and pursues his photographing with the utmost seriousness.