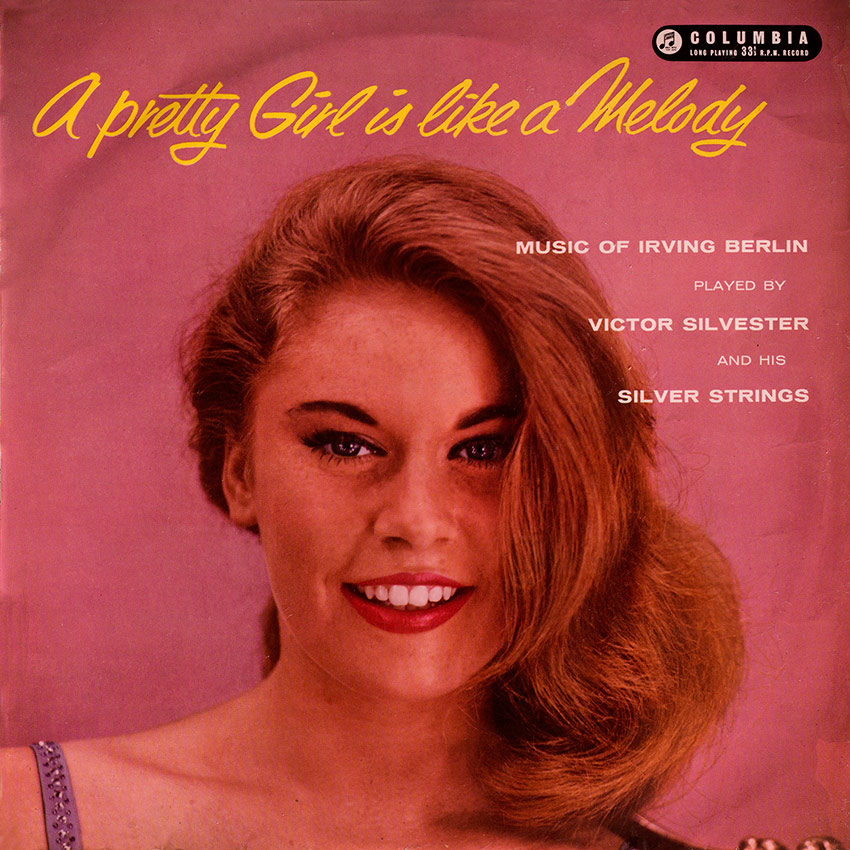 The cover tells us that the “cover girl” is Francis Dean. Nothing more is known about her but we can assume that she was hired for the day, maybe half a day, photographed, promised riches and success and who knows what else. We’d like to think she had a good life. Do you know Francis Dean? Tell us more if you do or did, we’d love to include it here.

There are few people in the western world who are not familiar with the melodies of Irving Berlin, one of the great composers of popular music. He was born in South Russia on nth May;1888, just seventy years ago, and was the eighth child of a cantor named Moses Baline. Early in life he left Russia to emigrate to the United States, and his first introduction to `show business’ was when he took a job leading, and singing with, a blind fiddler called “Blind Sol”. Not long after he began working as a singing waiter in New York, and it was at this time that he wrote a time called “Marie from sunny Italy”, which was published in 1907. When one considers that this was the first of over eight hundred so, that he has written, and that it earned him exactly 37 cents in royalties, it is doubtful if Mr. Berlin himself could foresee the fabulous millions that he was to earn from his music in the years to follow.

After his first tune was published, Irving Berlin became a ‘song plugger’ with a music company, and in this environment he soon began writing more tunes. In 19 to he took his first bow in front of the footlights, when he received 50 dollars for appearing in a show called “Up and down Broadway”. Within two years he had made a big enough name to appear in revues in London, and was already an international celebrity, for with the publication of “Alexander’s Ragtime Band” in 1911, he had been catapulted to the front rank of popular song composers.

The astonishing feature of Irving Berlin’s success is that he cannot read music, and he composes on a special piano, affectionately named “BUICK”, which was constructed for him in 1917 so that it could be shifted into any key he wished from the one key in which he could play-F sham. The majority of his greatest hits have been written at this piano.

He celebrated his fortieth year in show business with “Annie get your gun”, one of the most successful of New York’s and London’s post-war musicals. He considers that his biggest hit has been “White Christmas”, written for the film “Holiday Inn”, and Bing Crosby’s recording of this tune has sold over 9,000,000 copies.

Irving Berlin has said that he will never retire, and that he will continue to write songs until he dies. At the rate that he has written his so, in years gone by, it cannot be so long now before he reaches the 1,000 song-hit mark!

To select 16 tunes from this repertoire was no easy task, but we feel that the ones we finally decided on between 1919 and 1950 represent a fair cross-section of Mr. Berlin’s most successful compositions during this period of time.

In the mid-twenties Irving Berlin wrote several waltzes, including the ever-popular “Always” and the lovely melody “Because I love you”.

1932 saw the arrival of two tunes that have since become standard favourites, “Say it isn’t so” and “How deep is the ocean”. None of these four tunes was written for either the theatre or the cinema.

By 1935, however, he had been commissioned to provide the musical score for the film “Top Hat”, which starred the wonderful dancing partnership of Fred Astaire and Ginger Rogers, and from this score we have selected three numbers-“Top Hat”, “Cheek to Cheek” and “Isn’t this a lovely day?”

One year later he wrote the music for another Astaire-Rogers fibs “Follow the Fleet”, and what tune tide could be more appropriate for inclusion on this record than “Let’s face the music and dance”?

In 1937 he composed the music for a fibs starring Dick Powell, Madeleine Carroll and Alice Faye, and from “On the Avenue” we have selected two tunes “You’re laughing at me” and “This year’s kisses”. It is of interest to note that Victor Silvester gave Madeleine Carroll lessons in ballroom dancing when she visited London.

1938 Saw the arrival of yet another Astaire-Rogers film success, ” Carefree”, and one of the attractive numbers in it was “The night is filled with music”. In the same year Irving Berlin wrote one of his loveliest melodies for the film “Alexander’s Ragtime Band”, which starred Tyrone Power and Alice Faye. The melody? “Now it can be told”.

Many people consider that the tunes by Irving Berlin for the 1946 stage ‘production of “Annie get your gun” were among the best he has ever written; Ethel Merman and Dolores Gray played the part of Annie Oakley in New York and London respectively, and some time later Betty Hutton took the part in the film version. From this score we have chosen “I got lost in his arms” and “They say it’s wonderful”.

“Call me Madam” was staged in 1930, with Ethel Merman in the leading role, a part she also portrayed in the film version that followed. Our choice from this production is the number with a brilliant counter-melody “You’re just in love”.

Finally there is the tune that provides the title for this record; a tune that dates back to 1919, just after the First World War, and which is still played today whenever it is necessary to turn the spot-light on to a girl with glamour and beauty – “A pretty girl is like a melody”. It is our hope that these sixteen melodies from the prolific and versatile pen of a great American composer of popular music will provide you with a recording that you will be happy to have in your collection, for all of these tunes represent – the music of Irving Berlin.