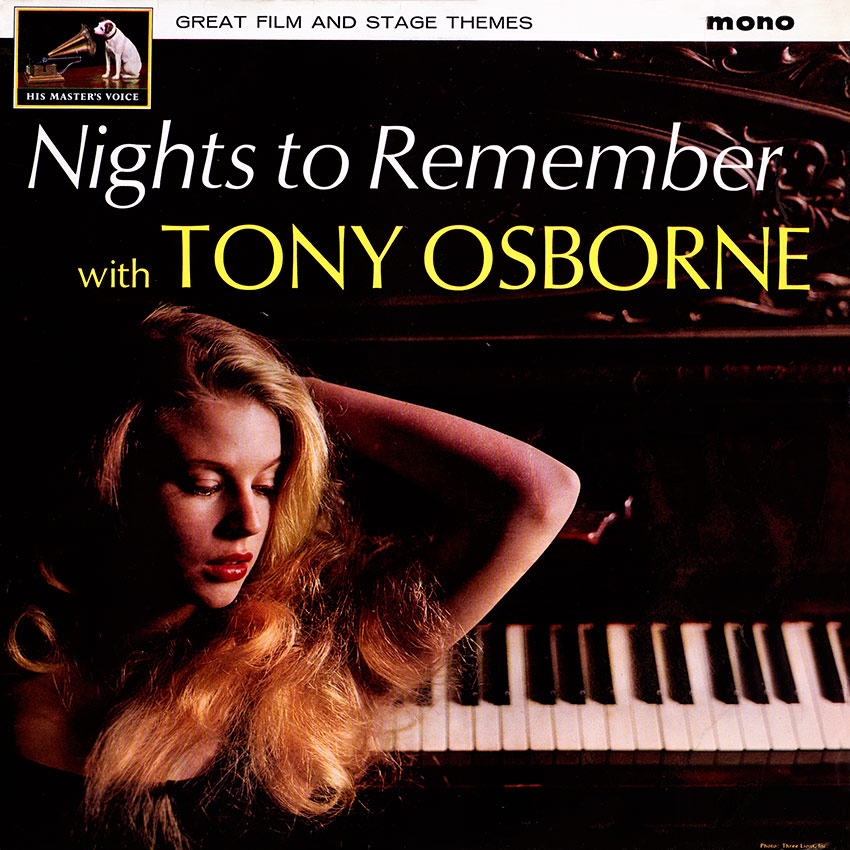 Someone once said that nostalgia is one of the sweetest of all emotions, a kind of pleasure recollected in tranquillity. In that case Tony Osborne’s latest LP is going to please a whole lot of people, for it is a musical essay in nostalgia, a tuneful walk down Memory Lane, a promenade of pops from great shows and films of past years.

This is my kind of record, my kind of music. Hearing the smooth Osborne string arrangements on Baubles, Bangles and Beads (from ‘Kismet’) and on the classic Rodgers and Hart melody Have You Met Miss Jones puts me into a happy and restful mood, takes away tensions, tunes up my sense of well-being. Wrapped up and served by Tony in a tasteful, modern manner are a whole string of show business hits.

How about Smile from ‘Modern Times’, High Noon, Samantha, from ‘High Society’ or You Stepped Out of a Dream from ‘Ziegfeld Girl’?

They are all here – and more besides.

‘I chose a group of memorable songs from movies and musicals’, declares Tony, ‘which are my idea of modern classics; tunes for which there will always be a public and which have taken their place in entertainment history.’

Tony has included on this LP songs like / Guess I’ll Have To Change My Plan from ‘Band Wagon’, Our Love Affair, made famous by Judy Garland and Mickey Rooney: the Rodgers and Had melody Isn’t It Romantic and Strange Enchantment, one of Bing Crosby’s all-time hits.

The unforgettable Never On Sunday, from the Melina Mercouri movie, Anna from the Silvana Mangano film of the same name, and Lisboa, from the British picture ‘The Secret Door’—these also are included on Tony’s Musical Tribute to Showland.

‘Nights To Remember’ is the kind of record to listen to after you have been to a show and are having supper at home. The songs are sentimental, yet performed in a modern style, with all the musical know-how which has characterised Tony Osborne’s work as composer, pianist and bandleader for so many years. To each and every one of these well-loved numbers Tony brings his own special brand of talent, a unique blend of the musician-ship and showmanship which has taken him to the top of his profession, won him the Ivor Novello Award for light music four times and made him one of the biggest-selling composers in Britain.

Recently Tony conducted the orchestra for Shirley Bassey at her New York concert at Carnegie Hall, and he has composed songs and scores for several films such as ‘The Secret Door’ and ‘Every Day’s A Holiday’ (starring John Leyton, Mike Sarne and Freddie and the Dreamers). Osborne compositions are heard constantly on the radio. His Windows of Paris is the signature tune for the B.B.C.’s nightly programme ‘Roundabout’. His South Sea Bubble is the signature tune of Carol Deene’s Luxembourg DJ shows and Shaw Taylor also uses a Tony Osborne composition as the signature tune on his Luxembourg series ‘Let’s Take A Spin’. Other Osborne com-positions like Streets of Sorrento, Turkish Coffee and Secrets of the Seine are part of our musical scene. Asa composer he is at the top of his profession; and as a musical director and orchestrator, Tony Osborne has few equals – as ‘Nights To Remember’ will surely indicate!