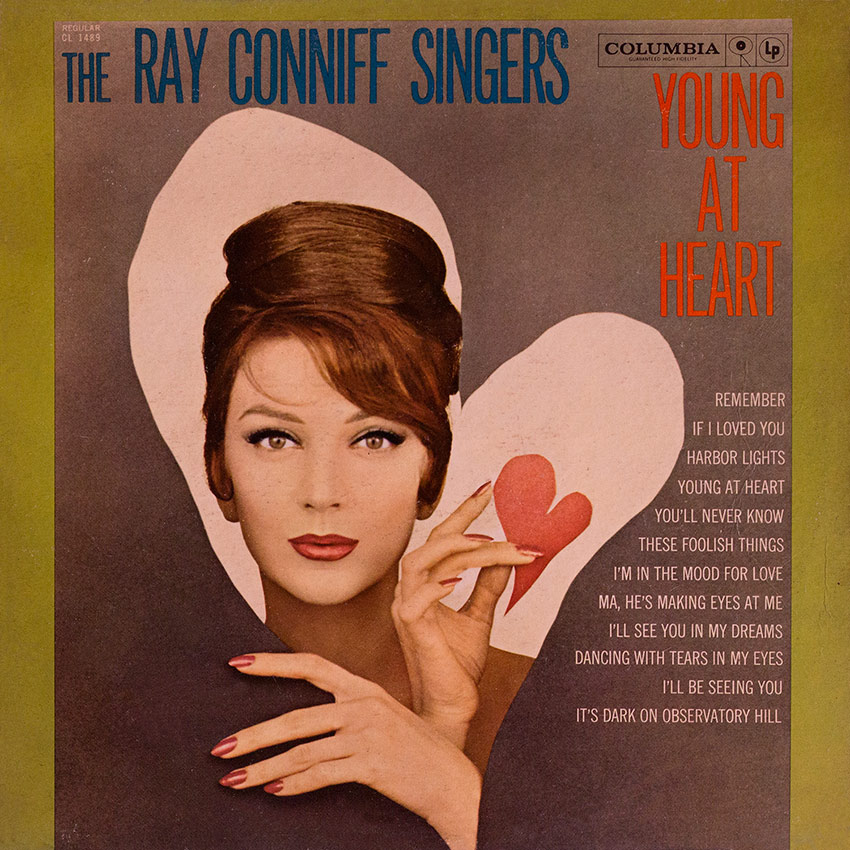 Fresh from their exhilarating success with It’s the Talk of the Town, (CL 1334/CS 8143), The Ray Conniff Singers turn their voices to another exemplary group of wonderful standards. Equally delightful for dancing or listening, these songs take on a special glow of youthfulness in the Conniff arrangements, and Ray’s singing group jives them a lilt that is particularly winning. No matter what your age, these songs are certain to make you feel young at heart, and to set your toes tapping to the infectious rhythms.

Beginning with his first arrangements for records (such hits as Johnnie Ray’s Walking My Baby Back Home, Guy Mitchell’s Singing the Blues and Johnny Mathis’ Wonderful, Wonderful, It’s Not for Me to Say and Chances Are) arranger-conductor Conniff has been responsible for some if the freshest and most appealing sounds on discs. When he turned his hand to dance music, beginning with the best-selling album, ‘S Wonderful! and continuing with other collections listed below, the results set off a revival of dancing across the country that shows no signs of diminishing. And although this collection is designed primarily to showcase the Conniff singers, there is dance music to please the most reluctant partner.

Music has been a vital part of Ray’s life since he first heard his father play the family piano in Attleboro, Massathusetts. By the time he began his Junior year in high school, Ray was an accomplished trombonist and with the aid of a mail-order transposer, an inspired arranger. After graduation, Ray moved to Boston, worked with a society orchestra, then with the Bunny Berrigan, Bob Crosby and Artie Shaw bands. It was during his four-year association with Shaw that Conniff emerged as an arranger of distinction, producing such hits as Prelude in C-Sharp Minor, ‘S Wonderful and Jumping on the Merry-Go-Round. During these same four years Ray also worked on radio shows and studied at the Juilliard School of Music. Army service afforded him the opportunity to work with Meredith Willson and Walter Schumann on the Armed Forces Radio.

Returning to the civilian world of music, Conniff was hired by Harry James as an arranger. He supplied James with, many successful arrangements, notably Easy On, The Beaumont Ride and September Song.

Conniff’s work soon came to the attention of Columbia’s Artists and Repertoire executives and he was signed to an exclusive contract as conductor of his own arrangements.

One of his most distinctive devices is the use of voices as instruments. Female voices, for ex-ample, double with trumpets, high saxophones or clarinets; male voices with trombones, trumpets or saxophones in low register. This singular com-bination intensifies soft tones, mellows harsher sounds—and has sold more than a million Conniff albums!