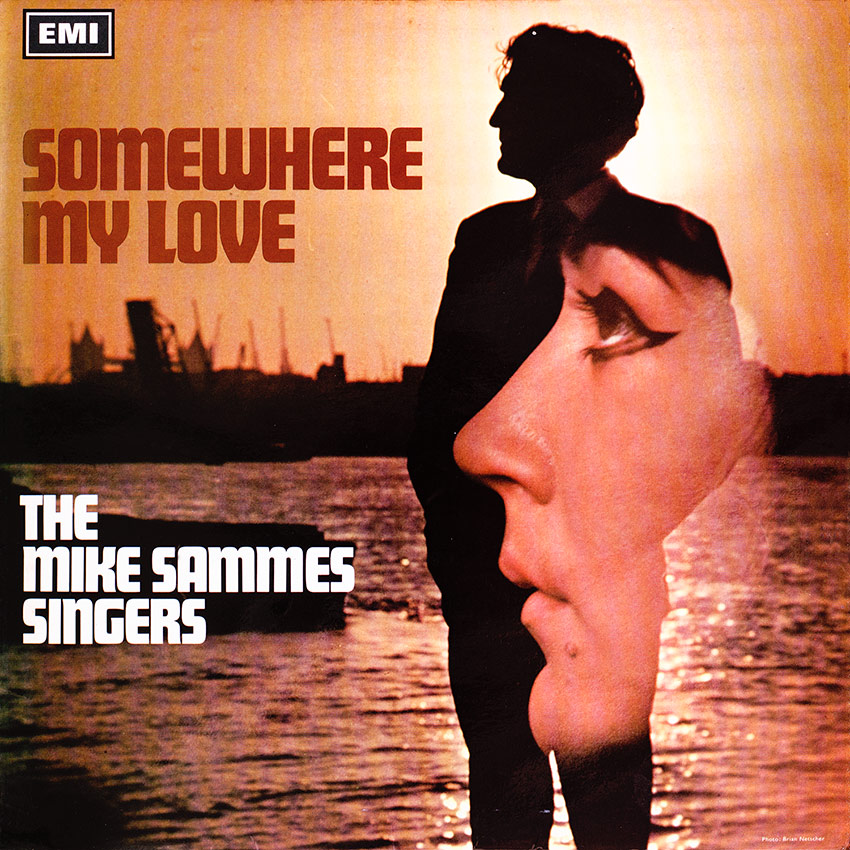 I think it true to say that everyone associated with the world of show business, and particularly with the recording industry, was delighted when the Mike Sammes Singers scored a chart success with the haunting “Somewhere My Love’ from the film ” Dr. Zhivago”. For many years, they have been acknowledged as one of the most hard-working and under-rated groups in Britain, and their hit parade entry was warmly acclaimed as both overdue and thoroughly justified.

Mind you, recordings on which the Sammes Singers were featured had previously tasted chart glory—but only in the role of a backing group accompanying a star soloist. Indeed, there are literally scores of such best-selling discs which—although their success cannot, perhaps, be directly attributed to the Sammes team—have been given added lustre, colour and sparkle by the contributions of this versatile and highly adaptable bunch of boys and girls. It is an accepted fact that the hit potential of any record is dependent upon a subtle combination of the right song, the right singer and the right backing—and these three factors are, in their own way, equally important. On how many occasions, for instance, have you heard the “Juke Box Jury” panel discussing the backing of a record, and declaring it to be the best part of the disc? Well, the Sammes Singers cannot claim to have been responsible for selecting songs or singers, but they have played a prominent part in the backings of numerous Top Twenty hits—and there’s many an international star who’s grateful to them for their assistance. The group has also fulfilled a similar accompanying function on countless television shows, including the top-rated “London Palladium Show”.

It was ironic that the group should have been so closely associated with stardom, without actually sampling it for themselves, more especially bearing in mind (as has now, happily, become common knowledge) that they are extremely accomplished performers in their own right. I don’t know why it should have taken so long for their reputation to blossom—possibly it is something to do with the all-powerful dominance of the beat groups, and the fact that pop fans have at last begun to swing back to an appreciation of melody rather than noise. In any event, “Somewhere My Love” (which, by the way, secured a hit for Mike Sammes in the teeth of competition from at least six rival versions by, at the time, better-known artists) was the turning of the tide. And the man-in-the-street has belatedly realised that, in the Mike Sammes Singers, we in Britain have our own home-grown answer to America’s top singing groups.

It is appropriate that his new showcase for the group should open with the song with which it is so closely linked. However, lest you should think that the Singers are restricted to romantic and sentimental ballads of this nature, I suggest you listen to a few of the other tracks which amply demonstrate their wide range and flexibility—as, for instance, the cheeky little Irish ditty “I’ll Tell Me Ma”, the exotic enchantment of the calypso-flavoured “Lemon Tree”, and the captivatingly seductive bossa nova setting of “The Shadow Of Your Smile”. My own particular favourite is the unusual martial treatment of the majestic “Born Free”, the first all-British composition ever to win a Hollywood Academy Award as the `Best Film Song of the Year’. But doubtless you will choose your own special favourite. Certainly there is plenty from which to select–items in the currently popular sing-along vein, like “Somebody’s Thinking Of You Tonight” and “I Will Wait For You”; songs which have had a smash-hit impact upon the hit parade, here given a completely new and distinctive styling, such as “Strangers In The Night” and “Somewhere”; a few slightly lesser-known items, like the poignantly charming “Lace Covered Window”; film songs, show songs—they’re all here! And all endowed with one over-riding quality—an irresistible melody . . . delightfully, competently and refreshingly performed. If proof were needed that the Mike Sammes Singers have now emerged as one of Britain’s foremost groups, this collection provides it. For my part, I can think of none other with such widespread family appeal. And after sitting on the touch-line for so long, who would say that they are unworthy of the high esteem in which thy are now held?

Side One 1. SOMEWHERE MY LOVE (Lara’s Theme from “Dr. Zhivago”) (Webster—Jarre) 2. SUNRISE, SUNSET (from “Fiddler on the Roof”) (Harnick—Bock) 3. STRANGERS IN THE NIGHT (Singleton—Snyder—Kaempfert) 4. THE SHADOW OF YOUR SMILE (from film “The Sandpiper”) (Webster—Mandel) 5. I’LL TELL ME MA (Trad.—arr. Sammes) 6. SOMEWHERE (Unaccompanied) (from “West Side Story”) (Bernstein—Sondheim) Side Two 1. SOMEBODY’S THINKING OF YOU TONIGHT (Powell—Symes—Schuster) 2. I WILL WAIT FOR YOU (Umbrellas of Cherbourg) (Legrand—Gimbel) 3. LEMON TREE (Holt) 4. WHAT DO I DO? (Paul) 5. LACE COVERED WINDOW (Westlake—Lobsa) 6. BORN FREE (from film “Born Free”) (Barry—Black)