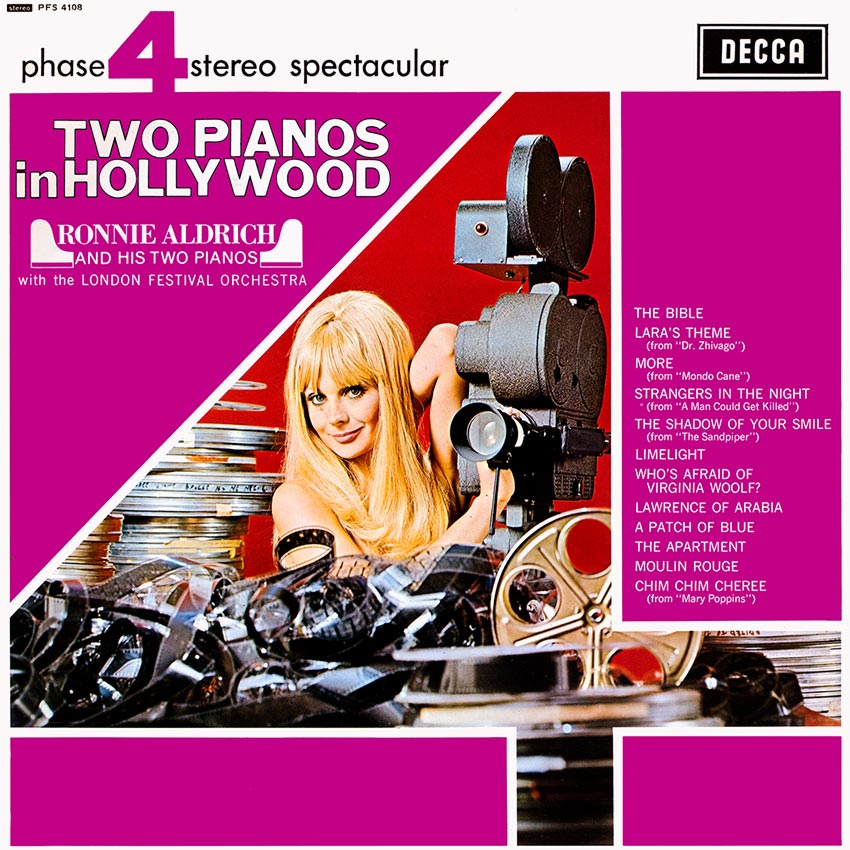 If you have any doubts whatsoever that Hollywood has produced a lot of extremely beautiful music, the artistry of Ronnie Aldrich will convince you and more than that, will captivate you. Here is a real musician one who can draw forth the richest resources of his instrument without resorting to pianistic fakery, who can create orchestrations that are lush without being over orchestrated. His approach to a theme is as straightforward as it is effective and full of personal style. There are no frills or overdone gimmicks, because Aldrich is too good a pianist to need them. But at the same time that he respects the music he plays, his interpretations are never stuffy or old-hat. For what comes across to the listener is that Ronnie Aldrich loves the music he plays. How else can one explain his uncanny ability to get right to the heart of a musical mood!

No wonder, then, that music from the movies is the perfect vehicle for this artist. The songs and themes on this album are colourful and moving enough not to need Technicolour or motion on the screen they can stand on their own as beautiful music. Film directors and producers have become aware that the person in the audience is a listener as well as a viewer. And if the selections on this album are any proof the movies have succeeded in attracting a slew of very talented composers. It is no longer true that where the eye feasts, the ear must starve.

In a truly magical way Ronnie Aldrich captures the colour of the screen and the emotional impact of the story without making the listener feel he is missing out on something visual. Aldrich’s style is as cosmopolitan as the film medium itself, travelling easily from Paris (Moulin Rouge) or the Russian plains (Dr. Zhivago) to the desert (Lawrence of Arabia). And like the movies, he is as versatile with different moods as he is with locales, ranging from the lyrical to the sprightly.

At the core of Ronnie Aldrich’s art is his natural feeling for melody. He is not afraid to let his piano sing, to breathe with the line as it rises and falls. Instinctively, he knows when to use the higher notes of the piano for brilliance and shimmer, the deeper notes for richness and emphasis. Perhaps more than anything else, it is this full, luscious tone which makes the Aldrich sound such an enveloping and delicious experience.