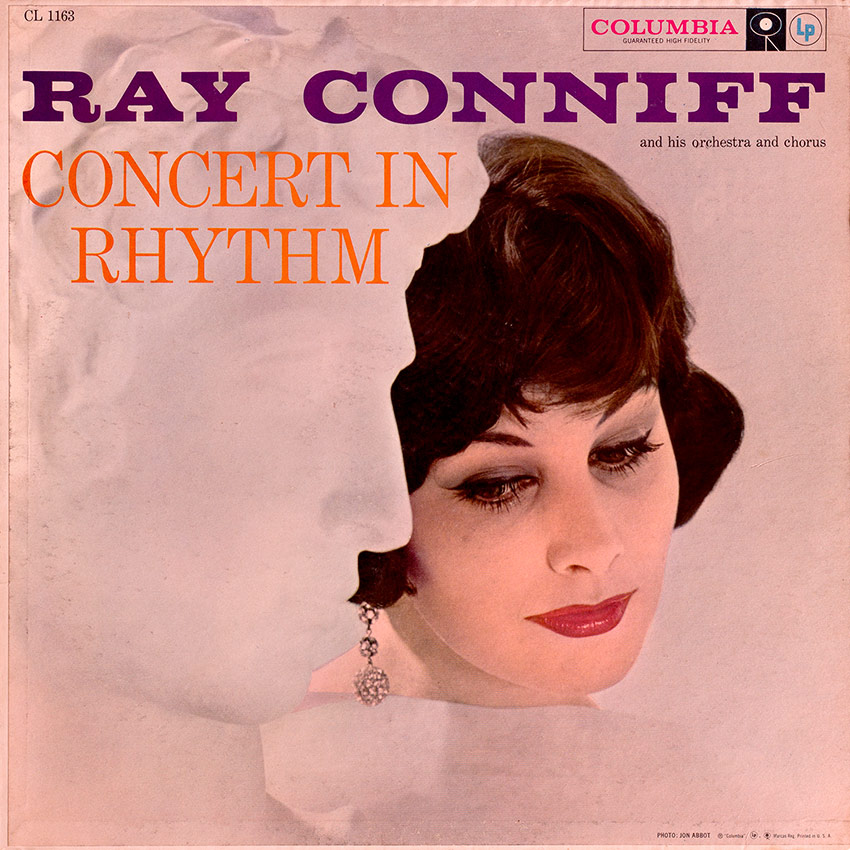 Ray Conniff was nothing if not prolific, releasing three albums per year during many years of his successful career. This album from 1958 was one of his best selling gaining a gold record status which in 1958 was something to shout about. Today you need only your mum, your mum’s boyfriend and a couple of neighbours to download your album and you’ve bagged yourself a Brit award. This one’s worth a listen as it features innovative use of voices as instruments which lends the production of each track a warm and enveloping aural pleasure. You can hear samples from this album over at YouTube.

Wonderful, marvelous and awful nice as his first three Columbia collections have been, Ray Conniff strikes out toward new horizons in this latest addition to his splendidly danceable and listenable offerings. This time he looks away from popular classics into the field of serious music, taking favorite and familiar themes and setting them in new voicings for orchestra and chorus. This is a process that has been going on for some time I’m Always Chasing Rainbows was borrowed from Chopin some thirty-odd years ago but it has rarely been accomplished with the lilt and freshness that Ray brings to this program. And as always, he has made sure that this particular collection is different both in approach and content from his others.

Ray begins with a lyric presentation of the main theme from Tchaikovsky’s First Piano Concerto, using the chorus as part of the orchestral fabric and also employing the piano to state the theme. Moreover, he uses violins extensively as a bow to the classic feeling. In the selection from the Swan Lake ballet, he again keeps a steady dance-floor tempo; the theme itself is the famous basic motif of the ballet, the music of the Swan Queen. Moving next to another famous Russian com-poser, Ray Conniff presents the richly romantic melody from Rachmaninoff’s Second Piano Concerto, perhaps the composer’s best-known work in that genre. Here again the sound is somewhat different from the customary. Conniff manner, but still unmistakably his, and again the piano is prominent in the arrangement. Returning to Tchaikovsky, he presents another beautiful and familiar fragment, this time from the Fifth Symphony, giving the melody to the wordless choral ensemble. Next comes the theme from the Ray Conniff Suite, an altogether delightful original waltz, featuring massed strings, and the first half of the program concludes with the brilliant love music from Tchaikovsky’s Romeo and Juliet (Overture-Fantasia), played in a warmly romantic arrangement.

The second part of the program opens with Ray’s arrangement of the broad, flowing theme from Gershwin’s Rhapsody in Blue, again using the wordless chorus, and continues with the afore-mentioned fin Always Chasing Rainbows, adapted from Chopin’s Fantasie-Impromptu. Here, on this side. Ray reverts to his more familiar style and sound, keeping nevertheless a solid relationship to the larger orchestra used in the first half of the program. Maurice Ravel’s Pavanne for a Dead Princess is heard next, in the famous adaptation called The Lamp Is Low, the Conniff arrangement stressing the mellow qualities of the melody. Then, in a setting of the On the Trail movement from Ferde Grofe’s Grand Canyon Suite, comes a cheerfully humorous interlude, followed by a contrastingly romantic selection, Claude Debussy’s Reverie. Ray has achieved an unusual effect by using the orchestral coloring for the romantic atmosphere, over a catchy shuffle-like rhythm. He concludes his concert in rhythm with Franz Schubert’s Serenade, set in a delightfully rhythmic concept that gives the charming old melody a new twist, typically Conniff and typically enjoyable.