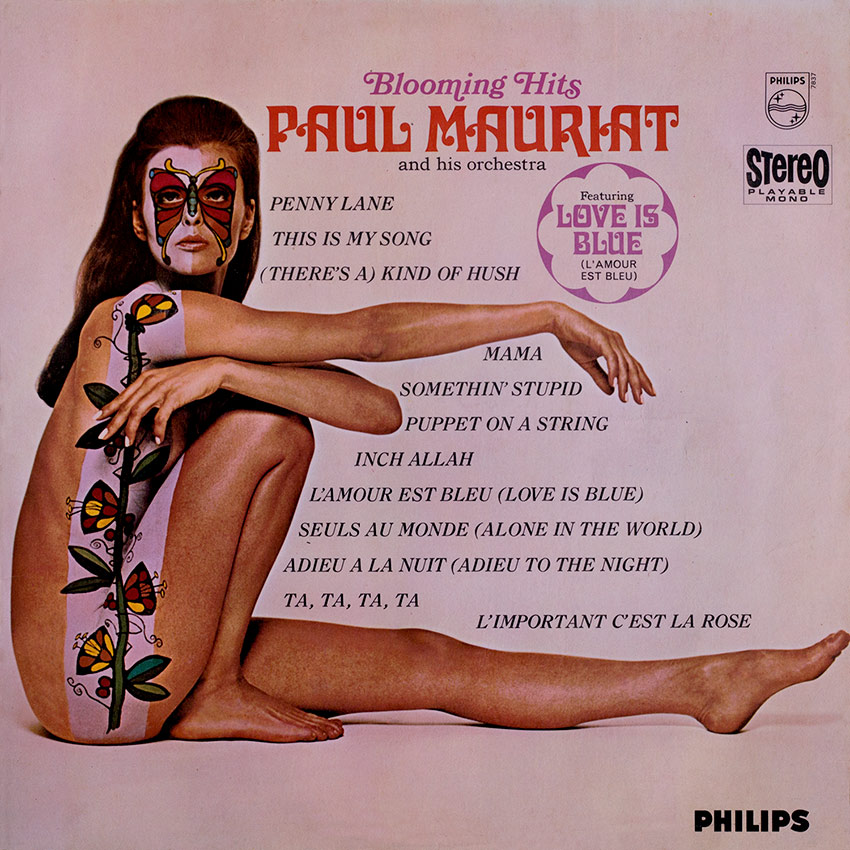 Paul Mauriat is an original, a young master, filling his musical masterpieces with a kaleidoscope of amazing sound variety. It is one thing to take an evergreen and shape it into a slick modern arrangement. But it is an entirely different matter to take the “now” music of today, considered by critics to be the most imaginative and creative in the history of pop music, and orchestrate it in such a way that it emerges entirely new and vital and from that day forward the property of Mauriat.

For this album the exciting Mauriat Orchestra presents a wonderful pop-pourri. There are songs from the Top Ten, familiar and at the same time distinctfully different. “A Kind Of A Hush,” is a softly rocking symphony, featuring, of all unusual instruments, a harpsichord. “Somethin’ Stupid,” originally sung by the Sinatras, pere et fille, is transformed into a Latin melody, a wonderful combi-nation of the lyrical and the dramatic.

The top beat music composers are well represented. The songwriting Beatles, Lennon and McCartney, by “Penny Lane,” and Cher’s Sonny by “Mama.” The former emerges as a musical distillation of the composition. Again the harpsichord is pleasantly evident, but there is also an incredible horn solo complete with scat riffs. “Mama’s” muted horn slices through an intricate counter melody, with the harpsichord keeping the beat. Hardly as Mr. Bono imagined, but nonetheless extremely successful.

There are other surprises: the first prize winner in the Eurovision, 1967 song contest, “Puppet On A String,” as bright and happy as a street band sprinkled with the confetti of circus music; two from the films. The wistful and haunting “This Is My Song,” from Charlie Chaplin’s THE COUNTESS FROM HONG KONG. Chaplin’s music is almost old-fashioned in concept, but Mauriat has endowed it with such subtlety and nuance that it forms a nostalgic, lasting impression. “Goodbye To The Night,” is one of the themes from the suspenseful THE NIGHT OF THE GENERALS. Here suspense is not stressed. Instead, voices and piano join forces, violins soar, and the melody becomes truly majestic.

There are other songs. The powerful “Inch Allah,” the incurably romantic “Seuls Au Monde,” “L’Amour Est Bleu,” where rock-beat is combined with chamber music styles.

A recent quote states: “The Paul Mauriat Orchestra is the one to watch for innovations in modern sound.” But watch, is not the word. Mauriat’s artistry is on an entirely different sensory wave length. Listen! And you’ll hear the new sound for the now generation.