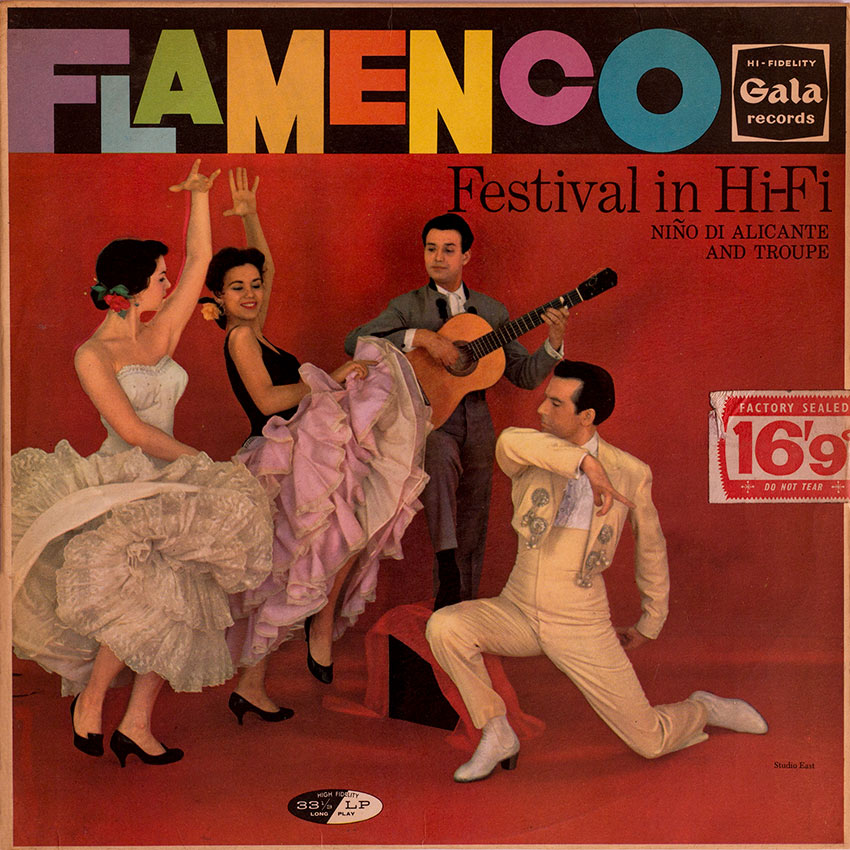 This is a Flamenco record from the fifties costing 16/9 (sixteen shillings and nine pence) which translates as approximately 83 pence in UK money or around a dollar in US money. There were many such flamenco themed records and this is a competently put together affair that had some of us in Cover Heaven towers (ground floor, storage room, behind the mops and buckets) kind of wobbling a little but not overly. What really got us excited was closer scrutiny of the record sleeve where we discovered the following:

Yes it is that Monsanto whose Lustrex material was used to manufacture this record. This record was originally a wax cylinder playing Victorian parlour songs before it was transformed through genetic modification into this Spanish flavoured disc. Monsanto was named after founder John Queeny’s wife. We give you that information freely in a spirit of openness and transparency. And because they are bee killers, allegedly. Here’s an old Monsanto advert from the same decade this record was released. Nino de Alicante, he was born in a cave halfway up the side of a mountain. An impressive start to an illustrious career as one of Spain’s foremost flamenco artistes by anyone’s measure.

On the Mediterranean coast of Spain, there is a seaport famous for its shipments of wines, oils, cereals, fruit and the finest and greatest of all Flamenco performers. Nino de Alicante is his name, and the seaport is known as Alicante.

Nino de Alicante was born in a cave halfway up the side of a mountain between the towns of Alicante and Aspe. Here, at his mother’s knee he learned all the intricacies of Flamenco with its variety of rhythms; the snapping fingers, castanets, hand clapping (patinas) and, of course, the wonderful soul stirring heel work (taconeo). Nino grew to become leader of his troupe because of his great virtuosity.

The discovery and subsequent famous concert tours of Spain and Europe were brought about because of a statue. The famous sculptor Amleto Cataldi of Rome, Italy, had gone in his youth to Valencia, Spain and subsequently to Alicante to sculpt some works for an exhibition that was to be held in Paris featuring the best of the neo-classicist school. He took ill and returned to Rome. Many, many years after his early death, his daughter, Eleanora Cataldi, in going through her father’s papers realized that some of his work existed in Alicante. Off she went by ship across the Mediterranean. Arriving in Alicante, she found nothing remained of her father’s work, but she discovered Nino and his troupe working in a little side street cafe. As Miss Cataldi explains it. . . . “Flamenco, when heard and seen at its best, is exciting and infectious: it ensnares us with its sounds of ‘be alive’… ‘be sad’… ‘be happy’ … ‘live'”.

Here we present Flamenco at its best. A true art form that is exciting to the ear. While listening, Spain will blossom before your eyes. All the romance and mystery is there. If you get the urge to shout “Ole” or “Viva Espana” . . . go ahead . . . it’s part of enjoying the listening. Nino de Alicante and his troupe have never appeared in Great Britain thus it gives us great pleasure to bring their first recording to this country.

We guarantee you many hours of exciting listening. Each time you play this record the sounds will develop more and more in your mind. This is something you must share and play for your friends.