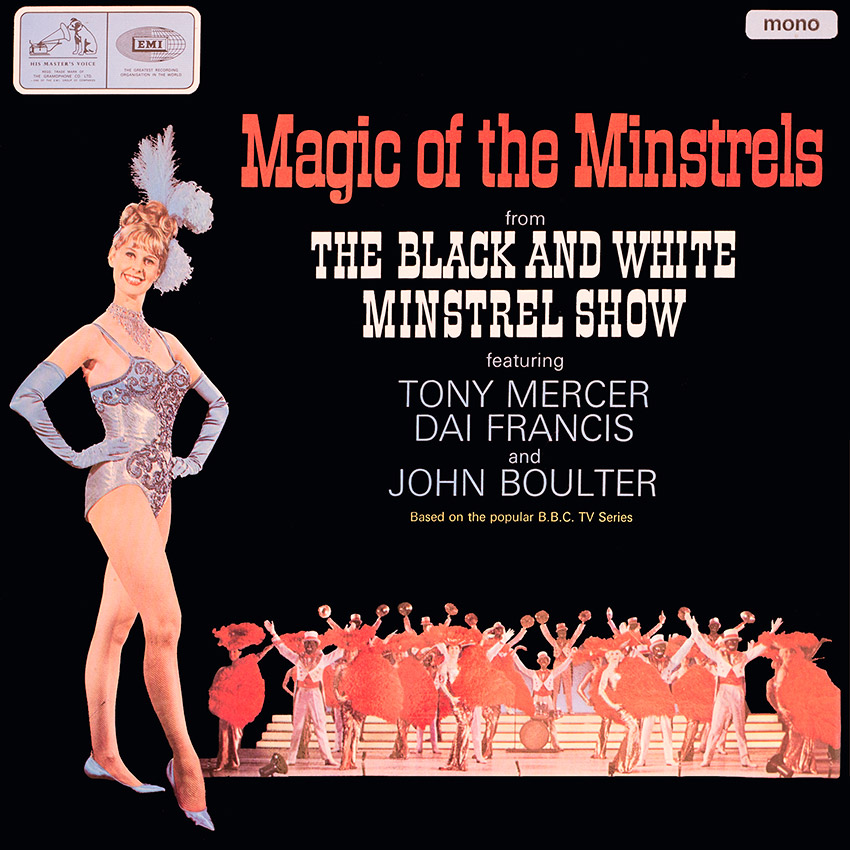 These days we look upon the “Black and White Minstrels” as a ludicrous and overtly racist form of entertainment. It’s hard to believe it commanded huge viewer ratings during the sixties when it was prime time programming in the UK. For more background history see this Wikipedia entry on The Black and White Minstrel Show.

Here they are again–one of the most remarkable phenomena to appear on the British show business scene for many, many years—the Black and White Minstrels! What makes them so remarkable —indeed, unique?

Well, in the first instance, it is incredible that a minstrel show should have taken this country by storm in an age when this form of entertainment was generally considered a relic of the past—the only comparable team in recent decades was the famous Kentucky Minstrels, who were at their peak as recording artists and broad-casters during the 1930’s and 1940’s. It has been suggested by a few cynics that black-faced minstrels are out of place in these days of more enlightened attitudes towards the coloured races—but this theory presupposes that the minstrel show is detrimental or derogatory to coloured folk, and certainly the Black and White Minstrels cannot be accused of any such approach; and their overwhelming acceptance throughout Britain and the Commonwealth would indicate that the vast majority of people accept them for what they are—honest-to-goodness entertainers. Anyone who is looking for political overtones in a situation such as this must, I feel, be deliberately striving to provoke trouble—and, happily, such complaints are restricted to a meagre few.

How can we analyse the Minstrels’ success? In a nutshell, it boils down to good, clean family entertainment which virtually no-one—irrespective of age, sex, or personal taste—can resist. To see the show on stage or television, one is first struck by the colour of the production—if I may use a paradox, in applying colour to black-and-white television and, indeed, Black and White Minstrels! It is vital, exuberant, sparkling, dynamic and alive—plus practically every other similar adjective you may care to apply. They move with an immaculate precision, which in itself is an education in the art of presentation and choreography. And this absorbing spectacle is one of the major reasons why the Minstrels have, seemingly, taken up residence at London’s Victoria Palace—where they have been one of Theatreland’s biggest box-office attractions for countless years. And it accounts for the similar success enjoyed by other Minstrel companies in theatres as far apart as Morecambe (where they have played several record-breaking summer seasons) and Australia. But in the final reckoning, the over-riding success factor of the Minstrels is their music—their choice of tunes, and the straight-forward uncomplicated manner in which they are performed. For these are the tried-and-trusted evergreens, the cream of the popular repertoire of the past century—from the Stephen Foster ballads of one hundred years ago, to the pick of today’s Tin Pan Alley output. They are songs we can all join in—and invariably do —whether participating in a sing-song at a party, or quietly enjoying the Minstrel’s brand of nostalgia in the relative quiet of our own homes. Nothing persuades the Briton to unwind more than an opportunity to “join in the chorus” and, in their skilful selection of long-lasting favourites, this is precisely what the Minstrels achieve.

It is this aspect of their widespread appeal which has made them such consistent favourites on disc—they rank among Britain’s top-selling album artists, with every one of their releases having reached the Top Ten LP Chart. Of these, three have—for varying periods—occupied the No. 1 position. No-one will be surprised by these facts—for the Minstrels’ albums are so infectious, so charged with compulsive entertainment, so durable in the lasting pleasure they create, that the issue of every new LP by this scintillating team is regarded as a significant event in every collector’s calendar. And those who don’t collect records—well, they continually request the Minstrels on “Housewives’ Choice” and “Family Favourites”, hadn’t you noticed? This latest programme is typical of the team’s own particular brand of bonhomie, and again features those three distinctive soloists who have become such an integral part of the Minstrels’ success formula—Tony Mercer, Dai Francis and John Boulter.