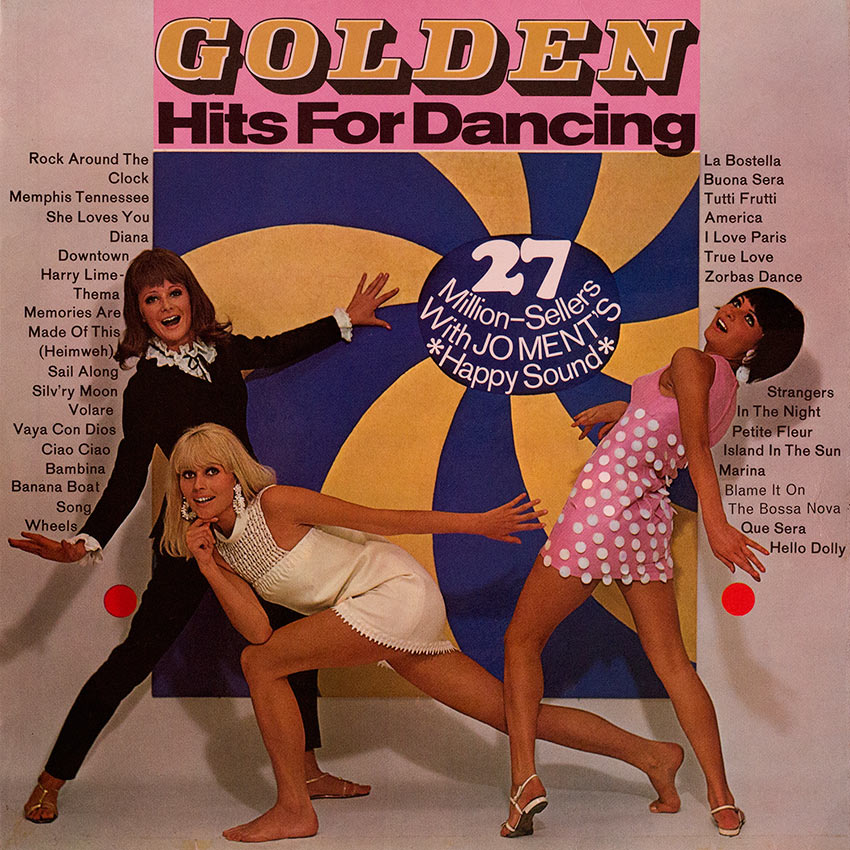 “Here is your complete home discotheque on one long playing record.“
Jo Ment was the show-biz name of Jochen Ment, a German musician who followed in the wake of the popular Bert Kaempfert and James Last albums of the sixties. This album contains segued tracks with crowd applause and shouts presumably to generate a party atmosphere as you listen to it. Jo Ment’s Happy Sound! The cover seems at odds with this featuring as it does three bendy ladies caught in the middle of a kind of Twister game with not a drink or apparent source of music anywhere to be seen. Unless that’s Jo’s idea of a party atmosphere. “Start dancing – Jo Ment will do the rest” as the sleeve notes say. In that case, fetch me a beer.

Here is your complete home discotheque on one long playing record, with the services of one of the continent, leading band. at your command.

Joe Ment and his “Happy Sound” of trumpets, trombones, saxes, electric guitar, organ and percussion offer you a sophisticated evening of happ music for a jet set clientele, with melodies and rhythms as enjoyed in the chicest night spots of the world, With Joe Ment you are on the French Riviera, in London, Mayfair, or living the dolce vita in any dream spa you care to mention.

The driving, pulsating beat of the saxes start us off with “Rock Around The Clock” and there’s no letting up as we move along with Chuck Berry and the Beatles to meet Paul Anka, “Diana”. This young lady, who was in real life one of the singer-composer’s girlfriends, brought him no less than eight Gold Discs. Then we go “Down Town” with the Tony Hatch composition that our own Pet Clark took around the world, returning to a post war Vienna and “The Third Man” for whom Jo Ment provides a thin disguise with the rhythm of the cha cha cha. One of Germany’s favourite singers is Freddy (Quinn) and one of his greatest hits was Heimweh, or in the English language version “Memories Are Made Of This”. Jo Ment has a particularly pleasing passage for trumpet, organ and drums In this highly danceable fox-trot. Domenico Mondugno put the beat into Italian popular music when he carried off first prize at the 1959 Sen Remo Song Festival with Piove, which he followed with another international top-liner “Volare”, in which he told how his heart had wings. “Vaya Con Dios” reminds us of these great multi-tracked guitar recordings of the American couple Les Paul and Mary Ford while with “The Banana Boat Song” we travel to the West Indies in the company of Harry Bellafonte (incidentally, in Germany this was another Freddy Quinn success).

Similar international ingredients make up the second part of Jo Ment’s programme. What could he more American than “West Side Story”? To drive the point home we have the song “America’. Cole Porter, playboy, poet, composer wrote the classic “I Love Paris” for the show “Can-Can” and ‘True Love’ for “High Society” – giving us in the latter one of the greatest love duets ever heard on the screen, between Grace Kelly and Bing Crosby. The Greek composer MikisÂ Theodorakis transformed a little song be had written several years before into “Zorba’s Dance” for another film, “Zorba The Greek” whilst the music for “Strangers in the Night’ was composed by Bert Kaempfert for yet another film, “A Man Could Get Killed”, although it became international through the voice of Frank Sinatra. Sydney Sachet, the American negro soprano sax player settled in Paris many years before his death and consequently many of hie works have French titles, not the least of which is “Petite Fleur”. There’s a delightful flute solo in ‘Island In The Sun” – another tribute to the West Indies and Harry Bellafonte. Jo Mint concludes this dance party of his with a trip to Dixieland and two rousing numbers: “Whatever Will Be, Will Be’, which many of us still associate with Doris Day and “Hello Dolly”, which in this style is inseparable from the name of the late Louis Armstrong.

These brief notes do not mention every title brought to you by Jo Ment, Happy Sound, but perhaps they point in the right direct., Start dancing – Jo Ment will do the rest.