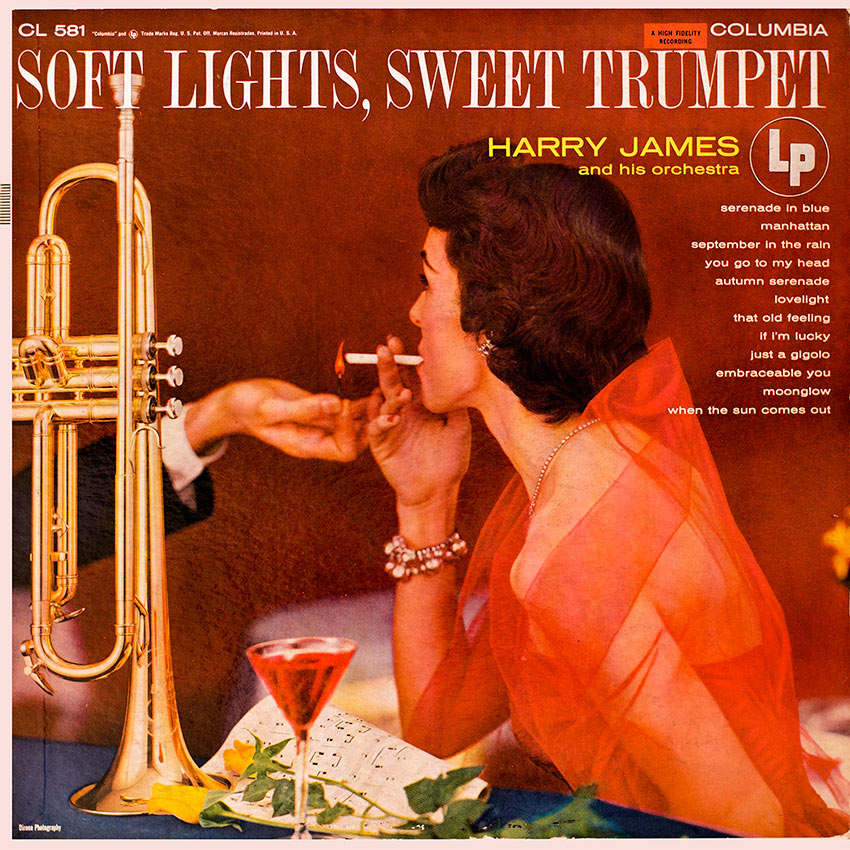 The instruments of the brass choir, by their nature, seem predetermined for use in brilliant, flaring music. Largely developed for use on occasions of military or high festive significance, they have to some extent carried that usage through to the present, and are most often heard when the music lends itself to (or requires) a bright, edgy tone. That this is a patent misuse of a versatile group of instruments has been demonstrated again and again, as musicians keep hacking away at the idea. The enormously subtle and vigorous variations of Bix Beiderbecke on the cornet, the cool, fluid trombone of Tommy Dorsey and the velvety trumpet of Harry James have whittled no little chunks away from the feeling that brass must be brassy, and in this collection the inventive James trumpet is heard in a further exploration.

Among the most polished of popular musicians, Harry James has virtually lived with popular music all his life. Arriving on the commercial scene just too late for first-hand absorption from the great jazz masters, he worked with most of the swing greats, who had already culled the best of the jazz techniques and adapted them to their own styles. James’ first important job in popular music was with Benny Goodman and his Orchestra in the late thirties, where he brought to its peak the shining trumpet mastery that is his trademark. Learning from the brilliant musicians of the Goodman orchestra, and supplementing their work with his own fresh ideas and expert technique, he swiftly became one of the top-ranking stars in an orchestra of stars.

That he was already a musician upon joining the group is no accident : he was born into music, for his father was bandmaster with the Mighty Haag Circus. The rousing brass of the circus band was part of his daily routine, and he worked with the band frequently during his early years, until the family re-tired to Texas. There, in Beaumont, he continued to study, and in his ‘teens he played with local orchestras and supplied them with an occasional original number. One of these numbers got recorded, Benny Goodman heard it, and sent for the young composer.

After a number of fruitful years with Goodman, James started his own orchestra, and found the going at first a little difficult. The swing era like everything else at the time, was going into a recession, and he found, with the changing mood of the country, that audiences wanted to dance rather than listen : the clusters of avid youngsters around the bandstand grew smaller. So he brought out the smooth, warm ballad technique that is so uniquely his, and, with a group of hit re-cords, found himself the leader of one of the most successful orchestras in the land. The formula was not only commercial—his group is one of the very few big orchestras still in existence—but musical, and it produced music that is still listened to on records and still very much a part of the popular scene.

In this collection, Harry James plays twelve evergreen popular songs, each so familiar that it requires something extra to make it catch fire. That vibrant extra some-thing is present throughout in some of James’ finest playing, singing through the arrangements clear, strong and sweet. From 1925’s Manhattan to 1946’s If I’m Lucky the trumpet is heard weaving in and out of the orchestra in fascinating patterns of sound, keyed to a mood of romance and relaxation. This is the sweet trumpet of Harry James … the soft lights are at your command.

Other Columbia Records by Harry James include:

Dancing in Person with Harry James at the Hollywood Palladium : Palladium Party • Bye Bye Blues • Please Take a Letter, Miss Brown • Ain’t She Sweet • Sugar Foot Stomp • How Could You Do a Thing Like That to Me • Moonlight Bay • Midnight Sun • Moan-in’ Low • Flash. “Lp” CL 562 • Extended Play Set B-428 (abridged)

Hollywood’s Best—Rosemary Clooney and Harry James: You’ll Never Know • On the Atchison, Topeka and the Santa Fe • Ruby • It Might as Well Be Spring • Come on-a My House • Over the Rainbow • Sweet Lei-lani • The Continental • Stella By Starlight • When You Wish Upon a Star • Red Garters • In the Cool, Cool, Cool of the Evening. “Lp” CL 585 • Extended Play Set B-319