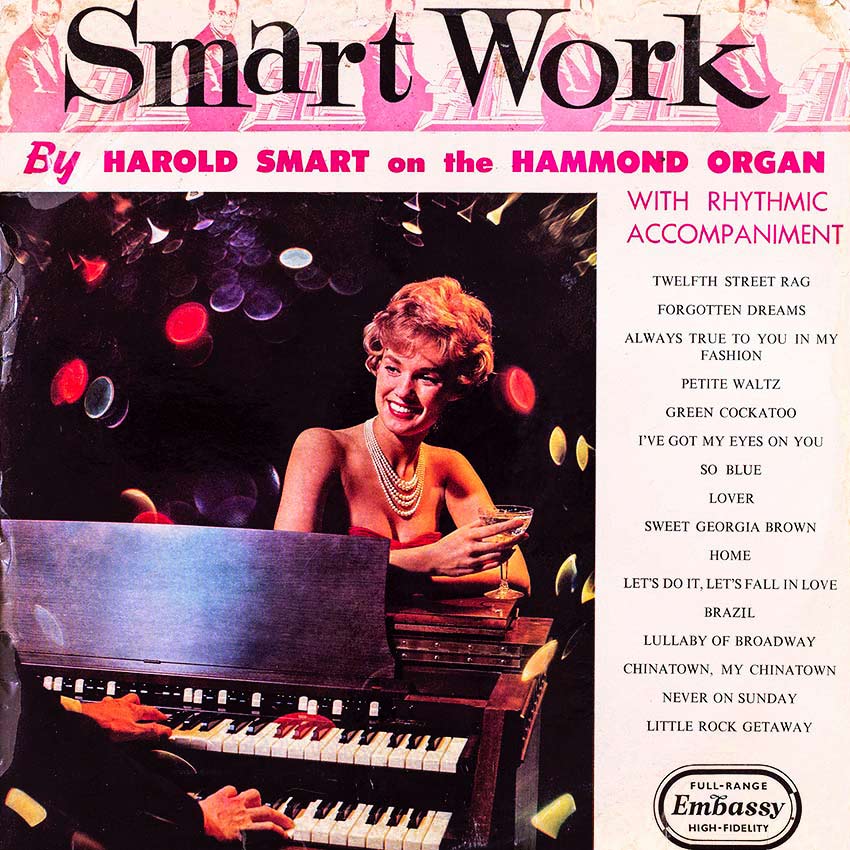 Once, a distinguished orchestral leader, used to having scores of instruments at his command, was asked which instrument he would choose if (Desert Island Discs fashion) he was castaway with only one. The Hammond organ was his immediate reply. It was so versatile, satisfying in result yet challenging in approach.

Just how satisfying it can be is well demonstrated here by Harold Smart (we nearly said Hammond Smart because the two are inseparable) who launches into a tip-top medley of tip-top tunes with happy-go-lucky zest. They are tunes to set your toes a-tapping, your pulse racing. All your favourites are here and your favourite man at the organ playing them! Harold started playing the Hammond organ at the age of 14. He was inspired to learn after hearing the pre-war stars, the Milt Herth Trio making marvellous music at such instruments.

His father gave him the early lessons—with such good result that before the year was out, 14-year-old Harold was making his first broadcast. It turned out to be the first of many. In recent years, he has delighted radio listeners with a regular spot in the popular “Showband Show” . . . a spot he held for six tuneful years. His playing was a regular feature of the “Sing It Again” programmes—and how they sang when his fingers touched the keyboards. And for five years, his music highlighted the “Take Your Pick” quiz show.

Even war did not stop him playing. He served for four and a half years in the Royal Army Medical Corps, seeing service in North Africa, France and Norway, and it was as a soldier he did a number of broadcasts in Oslo. The tunes he plays now are the ones he has had most demands for through his broadcasts and appearances. You can tell by the way they sound that he loves playing them. And there is no doubt you’ll love listening to them, too.

Wondering what all the fuss was about with Harold and his organ? Wonder no more, listen to his “Green Cockatoo” here: