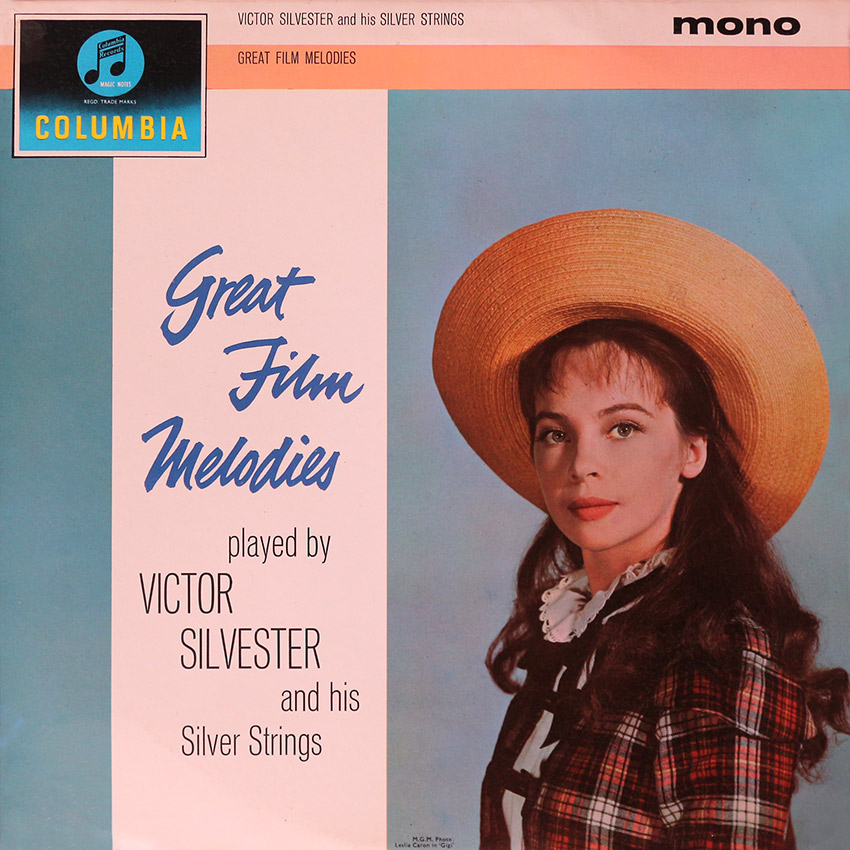 In this record of great film melodies you will find a selection that will recall memories of many notable films, all made within the last decade.

Gigi was composed for the film of the same name by Allan Jay Lerner and Frederick Loewe. The title role was portrayed by Leslie Caron and her suitor by Louis Jourdan; Maurice Chevalier and Her-mione Gingold played supporting roles in this delightful film.

Audrey Hepburn starred as the unforgettable Holly Golightly in the film “Breakfast at Tiffany’s”. The waltz Moon River, written by Johnny Mercer and Henry Mancini received the 1961 Academy ‘Oscar’ Award as “the outstanding tune composed for a motion picture” In that year.

Like so many of the stage shows for which Richard Rodgers and Oscar Hammerstein II wrote the music, “Flower Drum Song” was converted Into a film starring Nancy Kwan, James ShIgeta and Miyoshi Umeki. In the film it was Nancy Kwan who sang / Enjoy Being A Girl.

“West Side Story” was another stage show to become an equally successful film with Natalie Wood, Richard Beymer, George Chakiris and Russ Tamblyn as the stars. The music, including the tune Tonight, was composed by Stephen Sondheim and Leonard Bernstein.

The world-famous waltz Fascination was written by F. D. Marchetti in 1908. It was featured In the film. “Love in the Afternoon”, with Audrey Hepburn, Gary Cooper and Maurice Chevalier in the leading roles.

The theme song La Dolce Vila (The Sweet Life) was composed by Nino Rota for the controversial Italian film of the same name. The international cast included Anita Ekberg and Marcello Mastro, anni.

One of Hollywood’s most eminent lyric-writers, Paul Francis Webster collaborated with Dimitri Tiomkin to compose the enchanting song Friendly Persuasion (Thee I Love) for the film of the same name starring Gary Cooper and Dorothy McGuire. The Greek film “Never on Sunday” is certainly one of the most successful continental films of recent years, and it co-starred Melina Mercouri and Jules Dassin (who also directed it). The catchy theme song Never On Sunday (sub-titled Les enfants de Piree) was written by Manos Hadjidakis.

James Mason, John Mills and Herbert Lom are the stars of the 1962 film “Tiara Tahiti. and the theme music for this was composed by Philip Green and Norman Newell.

The brilliant musical score of the stage and film musical “South Pacific” was another triumph for Richard Rodgers and Oscar Hammerstein II. The film starred Rossano Brazzi and Mitzi Gaynor, and from it we have recalled the tune Happy Talk.

Max Steiner was the composer of the theme from “A Summer Place”, a film which starred Richard Egan, Dorothy McGuire, Sandra Dee, Arthur Kennedy and Troy Donahue.

It Might As Well Be Spring was written in 1944 for the first film version of “State Fair” with Jeanne Crain and Dick Haymes as the stars. This Rodgers and Hammerstein tune is also included in the 1962 film version, which stars Pat Boone. Bing Crosby, Frank Sinatra and Grace Kelly were the stars of the memorable film “High Society”, for which the music was composed by Cole Porter. It was Frank Sinatra who sang You’re Sensational in the film.

Our final melody A Woman In Love was specially composed by Frank Loesser for the film version of “Guys and Dolls”. The stars were Marlon Brand, Jean Simmons. Frank Sinatra and Vivian Blaine.

All these tunes have been superbly arranged by Brian Fahey, and will recall different memories for many people. Victor Silvester considers that these sixteen songs, played by the thirty-three members of the Silver Strings, deserve to be included among the great film melodies of our time.