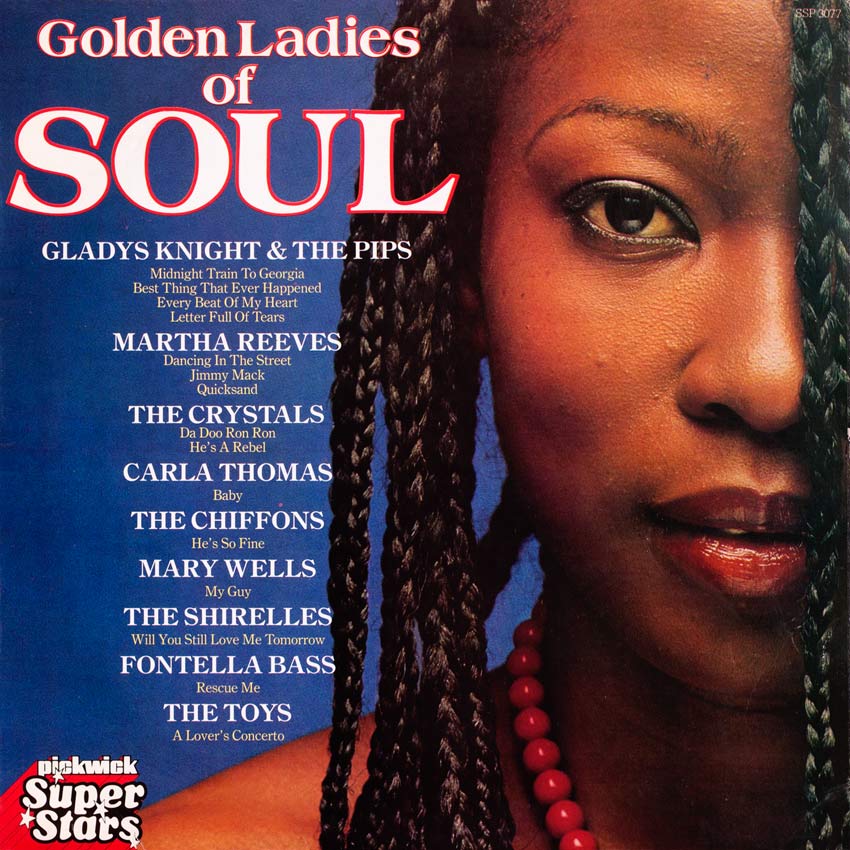 This album is built around ladies who, either as soloists or in vocal groups, laid the foundation for successful careers and hit records during the early 1960s, and it is thus no coincidence that there is strong representation from the vintage Motown era, which grew to strength during those halcyon years.

Mary Wells was the first Motown lady superstar, enjoying many hits in the American charts and eventually being the first artist from the legendary Detroit Corporation to score a hit in the British charts with the success of “My Guy” in 1964. The previous year had seen Martha Reeves & The Vandellas establishing a hit reputation in the USA, “Quicksand” numbering among the group’s early winners, while 1964 saw ‘Dancing In The Street” climbing high, eventually going on to become a British hit a couple of times in later years, gaining notable acclaim in discotheques along with ‘Jimmy Mack,” a lilting beater from 1967 which was also reissued afterwards by UK public demand. The seeds for the success of Motown’s vocal groups had actually been sown during the preceding years by other groups presented in this collections Gladys Knight & The Pips had emerged from their hometown of Atlanta, Ga., during the late 1950s, and by 1961 had travelled north to New York, a journey made worthwhile by the healthy sales of soulful harmony ballads like “Every Beat Of My Heart” and “Letter Full Of Tears,” the latter song actually aspiring to the UK charts via a shallow cover-version by one Billy Fury (ironic in that Glady’s original hit was on the Fury label in the USA!). Gladys also, of course, later recorded for Motown, and in the early 1970s went on to international stardom with smash hits like “Midnight Train To Georgia” and “Best Thing That Ever Happened To Me” for Buddah — she remains eminently popular and successful to this day, being signed to CBS early in 1980. As Gladys and the Pips were adapting their gospel music roots to more general taste in 1961, so the Shirelles, led by Shirley Alston, were making a name for themselves with distinctive vocals on love-songs like “Will You Still Love Me Tomorrow in a mood readily identifiable to teen-agers of that era, while a young producer named Phil Spector was building a reputation for himself in energetic style on some urgent, beaty hits by a quartet of teenage girls tagged the Crystals; “He’s A Rebel” was a crie de couer trying to justify the delinquent behaviour of a boyfriend in 1962, and the following year “Da Doo Ron Ron” raced up the charts almost as quickly as the tempo of the frantic love song.

This collection is completed with three other smash hits originating from various different areas of the USA; New York 1965, and a trio of young ladies named the Toys adapted a movement by Bach into ‘A Diver’s Concerto;” also 1965, further west in Chicago Fontella Bass, from St. Louis, Missouri, was opening her hit account with the throbbing plea “Rescue Me,” and finally in 1966, down south in Memphis, Carla Thomas was adding her unforgettable contribution to the honour roll of hits on Stax Records with the appealing “B-A-B-Y” Thus we are proud to present for your entertainment – some Golden Ladies of Soul.