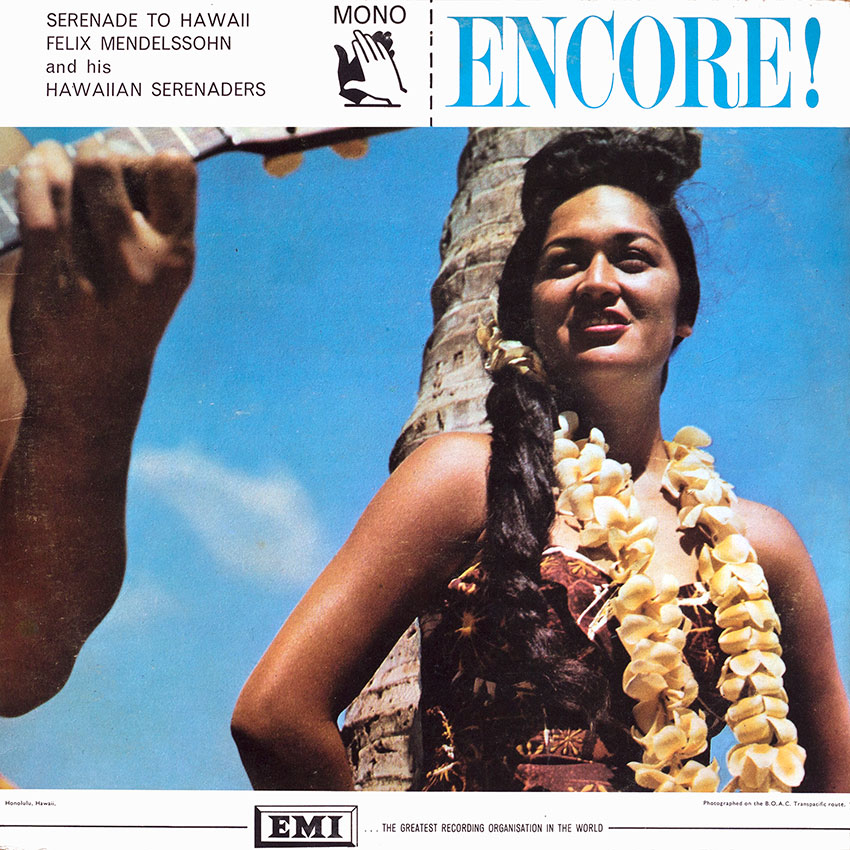 It may not be possible to feel warm in a British winter by merely thinking of some by-gone summer, but the music of Felix Mendelssohn and his orchestra on record is almost guaranteed to bring a vision of the sun to the most arctic climate. Hawaii! The very name conjures up a picture of waving palms, blue seas and sky and the surf creaming along the golden sand. Even the geography text-books fail to dispel the illusion and the atlas shows Hawaii as a string of islands, between twenty and thirty degrees north of the equator, set somewhere near the centre of the Pacific.

For many years the Hawaiians have been looked upon, quite rightly, as a gay, fun-loving people and music to them is an essential part of their life. Dancing and singing mean much to them and a, great deal of their traditional ceremonies use music as an integral ingredient. “Hula dancers” is a term used to describe young ladies swaying to the sound of dream music, but “hula” in itself means simply “to dance”. Hawaiian hula takes on an infinite variety of forms each described in its title; hula pahu, for example, is a drum dance in which the big drums dominate the rhythm. Felix Mendelssohn’s Sophisticated Hula represents a fusion of island rhythms and Western music. Three Hawaiian towns are saluted here; Hilo and Kalua are situated on the main island of Hawaii while Honolulu, the capital of the islands, is on Oahu.

Films about Hawaii invariably include scenes in which the lei plays a big part and the Felix Mendelssohn orchestra gives its impression of one such lei formed from sweet gardenias. Lei is a Hawaiian word meaning any garland or necklace, although it is a term which tends to be reserved for hoops of flowers nowadays. On a number of tracks extensive use is made of the Hawaiian guitar, a four-stringed instrument with a long neck which helps to give the music its distinctive colouration. The sweet harmonies and graceful, flowing melodies are pleasingly and accurately played by Felix Mendelssohn’s orchestra, for Felix has made a particular study of music from this corner of the world. Parting is such sweet sorrow, and, as the record comes to an end, we remember the traditional Hawaiian farewell “Liliha Lele’o”. There is no simple English translation for this touching phrase but one authority on Hawaii and its peoples has likened it to Horatio’s words at the death of Hamlet: “Good night Sweet Prince, and flights of angels sing thee to thy rest”.

The music of Hawaii is even more enchanting in Hawaii. Fly the B.O.A.C. Pacific Jet Bridge – Stopover en route in Honolulu at no extra fare. London – New York – San Francisco – Tokyo – Hong Kong by BOAC ROLLS-ROYCE 707 -Aristocrat of the Skies.