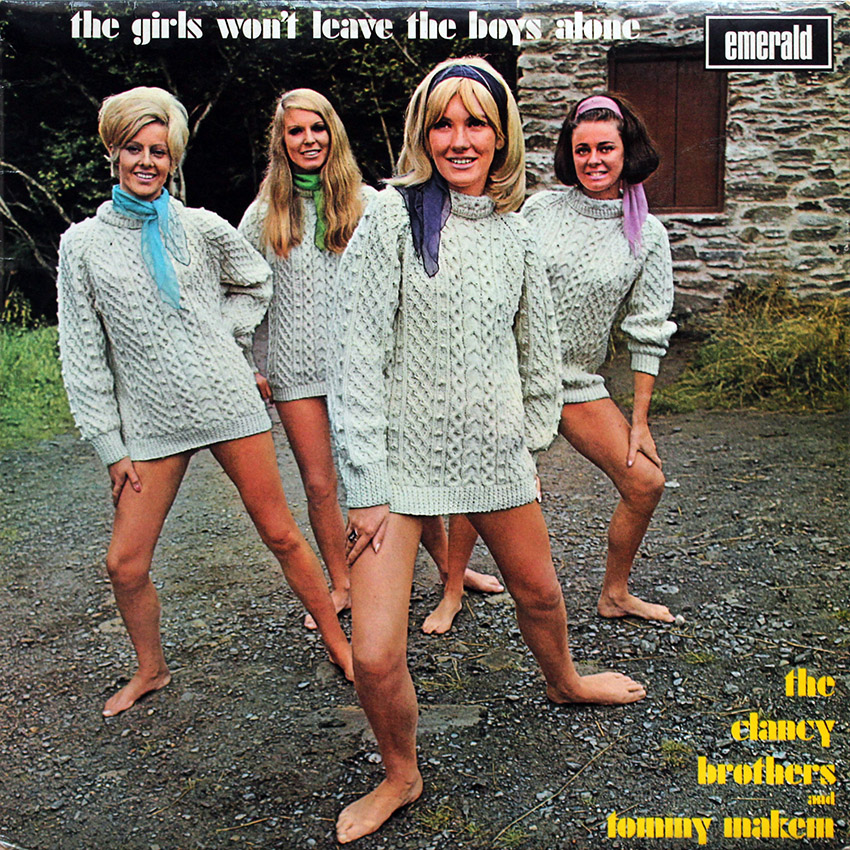 In many ways a disturbing cover. What exactly are the women doing? Surely not a reaction to the three “tough-fisted” Clancy Brothers and Tommy Makem? As the sleeve notes inform us, “Here they are, four tough-fisted, gentle-hearted Irish singers who have opened up a floodgate of entirely new songs.” I guess if your gentle-hearted approach fails to deliver, your tough fists will come in handy.  Who said romance was dead?

To document the story of The Clancy Brothers and Tommy Makem one had best have a very long sheet of paper or write very small.

Here is a group that has a most varied, a most unusual and above all, a most musical background. Therefore it is no small wonder that, in such a short time, they have reached the pinnacle of their success and retained it, and they will undoubtedly retain it for many years to come.

The members of the Clancy clan – and there are many of them – are all singers. Besides the members of the group – Patrick, Tom and Liam – there are Mom, Pop, Bobby, Pet, four sisters and their children who numbered twenty one at the last count.

The Clancy’s family home is at Carrick-on-Suir, a small town in county Tipperary that has a population of about four thousand. Situated in a valley between Comeragh Mountain on the one side and Slievenamon on the other and overlooked by Ormonde Castle. Carrick-on-Suir is a market town where pigs are sold on Mondays, dairy stock on Wednesdays and beef cattle on Fridays. The teachers in the towns schools are either the local nuns or the Christian Brothers and all the subjects are taught in Gaelic as well as in English.

The traditional music of Ireland is basically Irish tunes with English lyrics, but these are translated and sung in Gaelic. Although the songs were originally sung without any accompaniment, over the years the guitar, harmonica, penny whistle and harp have come into ever increasing use.

Patrick, the eldest brother, is an actor and a producer as well as a singer, but he is more interested in music than in the other activities and he plays harmonica on most of their recordings. He was an active member of the I.R.A. and so the rebel songs they sing are naturally done with great gusto and feeling. He was in the R.A.F. during World War II and has done decorating and painting as a living in many pans of the world as he is a keen traveller.

Tom was also an actor, having trained with the English Shakespearean Repertory, and he went to the United States in 1948. He has been a welder, a chef and a Warrant Officer in the R.A.F.

Liam, the youngest of the three, was an actor too and he went to the U.S.A. in 1956. He plays guitar and harmonica.

Tommy Makem was born at Keady, county of Armagh, and he plays penny whistle, warpipes, piccolo and drums. He made his first public appearance when he was five singing ‘The Beggarmarl and at the age of eight he joined the St. Patrick’s Church choir and he continued to sing with them for fifteen years, doing Gregorian chants and motets along with the choral work. When he was fourteen he worked in a garage as a clerk/book-keeper and at nineteen he was a barman and wrote a sports column for the local newspaper. Tommy went to the U.S.A. in 1955 and in 1956 he made his first recordings with the Clancy Brothers. At the Newport Folk Festival in 1959 the New York Times chose him and Joan Baez as the ‘best young folk singers’. Tommy’s advice to the myriad of fans who want to join the ranks of better folk singers is: “The chief thing is to believe in what you are singing. If it’s a fun song, you must be in a fun mood. It’s like acting – don’t try to imitate anyone. Just because Joe Doakes has a bad voice, but is a traditional singer, you don’t have to sound like him. If you have a better voice than those you learned from, use it. It enhances the song.

Here they are, four tough-fisted, gentle-hearted Irish singers, who have opened up a floodgate of entirely new songs; Irish folk music with its lilting charm, fierce independence of spirit arid whimsical view of life. For the first time in the revival of folk music, the line between ‘authentic’ arid ‘entertainment* has been narrowed, to satisfy the core of devotees who know that the real folk music is so much richer, deeper and more durable.