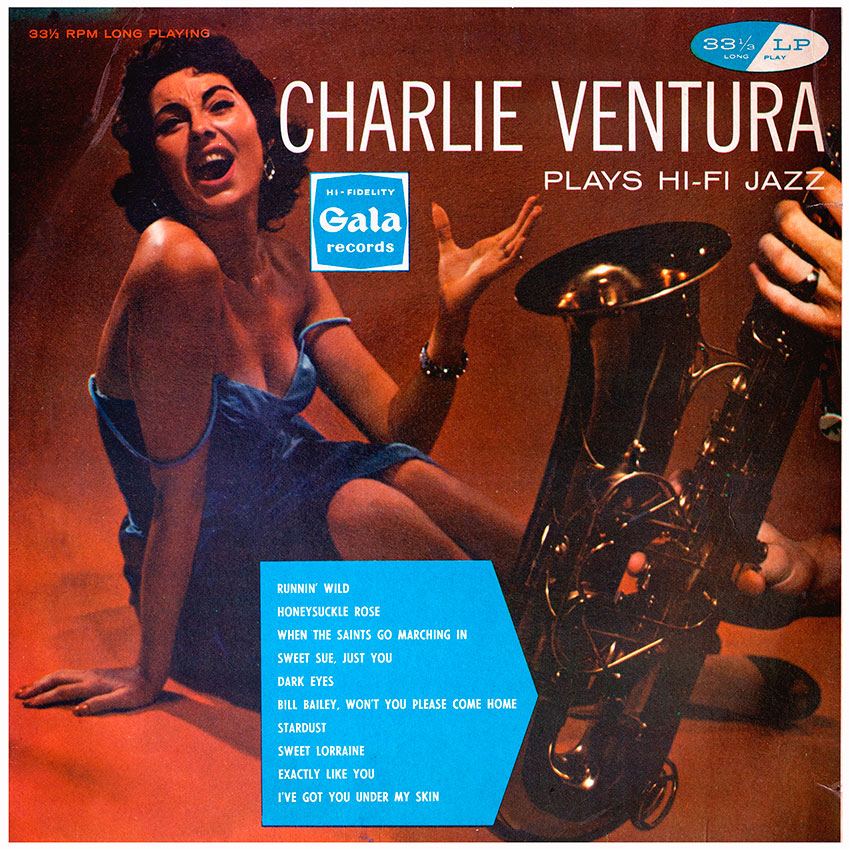 If it’s jazz you’re after—that is, the listening and dancing kind—you’ll go a long way before hearing anything as truly great as this superb Hi-Fidelity recording by Charlie Ventura and his quintet.

Here you have in Ventura a saxophone virtuoso who for many years has been an unparalleled great. His fabulous technique, warm tone, and ability to play with a strong swinging beat have won him the respect and admiration of fans and critics throughout the world.

At one time or another in his varied and colourful career, Charlie has worked with some of the greatest names in contemporary jazz . . . men like Gene Krupa, Roy Eldridge, Dizzy Gillespie, Bill Harris, Buddy DeFranco, Teddy Powell, to mention just a few.

Eventually Ventura formed his own group and their fresh approach to jazz won for them first place in “Down Beat”, “Metronome” and “Orchestra World” polls. Charlie’s imaginative and swinging tenor playing also won for him a Metronome Saxophone Soloist award.

About his music, Ventura says, “Our music is composed, arranged and performed for both the listening and dancing audience, and while using original ideas incorporating ‘new sounds’ into the music, we do not lose the general structure of a melody, line, or rhythm. We follow through with this method on all of our numbers and in this way, we do not alienate the many, who have not yet come to completely accept the rapid change being made in popular music and jazz these days.

The verve and versatile, the change of mood and mastery of style which he displays on this Gala L.P. has made Ventura one of the unquestioned greats among the great jazz instrumentalists.
This record is a USA TOPS recording