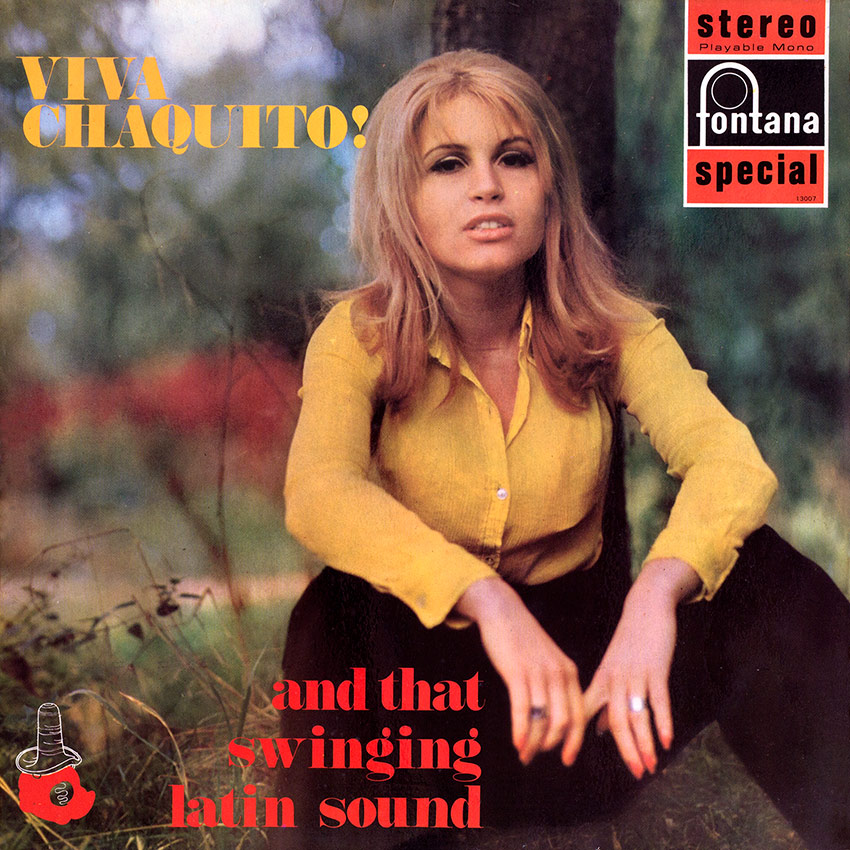 The title of this album sums it all up admirably. This is Chaquito, and this is a very swinging Latin sound. The visas are optional, of course, but we doubt very much whether any of you will be honestly able to refrain from emitting some kind of applause or approving sound after you have listened to this LP. A decade is a long time in popular music.

Long enough for countless disc hopefuls to make their debut, perhaps achieve a few brief weeks or months of high-selling glory, and then sink without trace into that overcrowded oblivion that awaits so many short-lived inhabitants of the transient pop world. But Chaquito is an exception. It is now well over ten years since Fontana artists and repertoire manager Jack Baverstock invited Johnny Gregory to assemble a big line-up of top recording session musicians, and feed the demand for exciting examples of the currently popular cha cha cha dance music. Hence the “Cha” part of El Gregory’s soubriquet. The interest and appeal of Chaquito records did not recede in ratio to the wane of the cha cha cha vogue, however. Chaquito LPs were not abundant in quantity, but those that came along found increasing favour amongst an international audience, including Latin America, where record buyers are born to these types of rhythms and are accordingly hard to please. And now, over ten years later, Chaquito records, ancient and modern, are selling more and more in wider and wider areas of the globe as well as in Britain. He hasn’t topped the hit parade in any country yet, he hasn’t done “Sunday Night At The London Palladium,” or been invited by a giggling guru to meditate in the Himalayas*, but he has found a vital, vibrant formula based firmly on. the most torrid of Latin tempos that has provided unique longevity of recording existence and ensures unlimited prospects and potential for the future. Johnny Gregory is exceptionally qualified as an orchestrator of the whole gamut of quality music from the classics through film music to jazz, and his flair as a writer for strings is without peer in Britain today. Being of Latin descent himself, he has the innate feel for rhythm that characterises all the Latin races, and a boundless interest in and affection for the rhythms of Latin America.

This LP proves all these points. Baia, with its lilting Brazilian batuque beat, the shrill power and intensity imparted by the piccolo unison with the trumpets, the swinging Latin jazz of the middle-eight release, and the lugubrious grunt of the rosined cane within a drumhead in the hands of Denis Lopez and known as a cuica, is good for openers. Then there’s the haughty bull-fight atmosphere superimposed on a crisp samba beat in Corrida, the soothing baion grace of Mexicana, and the fiery, polyrhythmic Afro-Cuban attack of the chunga written by Perez Prado, king of the mambo and chancellor of the chunga. The ritmo here, provided by Senores Jack Peach, Barry Morgan, Denis Lopez and Stuart Gordon, leaves nothing to be desired. In complete contrast, Barney Gilbraith’s vision of feminine loveliness, Francesca, glides seductively along in baion time before the full might of the Chaquito crew is dramatically unleashed again in Special project, which was used as signature tune for an independent television series. The second side begins with a nimble Kentonesque excursion written by well-known West End Latin bandleader Francisco Cavez, with a tremendous, explosive break-out by the whole orchestra after the initial thematic statement, erupting again behind the tenor-saxophone and trombone solos and leading into a brief jungle duet for Barry Morgan’s bongos and Denis Lopez’s congas. Campanella demonstrates conclusively that Chaquito is no mere wild man of the rhythmic woods by dint of its chiming brass tintinnabulation and delicate progression. El Greco in this case is Buddy Greco, and his tune gets a mixture of jazz and baion treatment. Parango, a Chaquito composition in hectic fast, guaracha style, spotlights Johnny Scott’s flute and some adept timbale punctuation and fill-ins from Barry Morgan after the flute’s first chorus. The pace relaxes for another chunga, and then Chaquito sketched out a few brief bars for the orchestra, instructed them to imagine themselves as a bibulous street band at carnival time, and gave them their musical heads. You will hear the exact carnival mood depicted, even the rockets soaring skywards by courtesy of the trumpets and Manny Winter’s piccolo. So carnival-minded was everyone that this busking furore went on for a full five minutes after Jack Baverstock faded down the controls. So here we have another Chaquito LP. Most of the exclamatory yelps of encouragement and enthusiasm audible came from Chaquito himself, and if you were directing a line-up like this, you would feel the same. As for how the musicians feel, it’s not un-common for them to forego lucrative commercial jingle and film sessions for the chance of blowing on a Chaquito date at normal rates. As for how you feel, we distinctly heard a yell of “Viva Chaquito!”