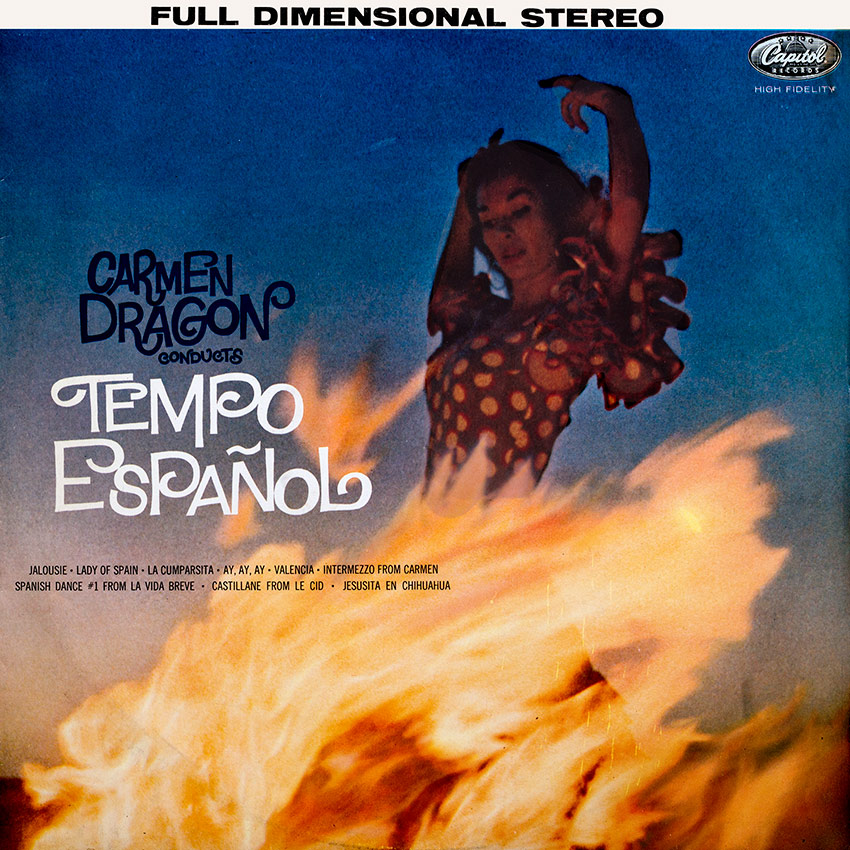 For centuries, music has been one of Spain’s principal exports, produced in a multitude of shapes and forms and transmitted to other lands in both hemispheres over those mysterious, duty-free routes which works of the imagination have always traveled.

It is possible, however, that even more Spanish music has been composed outside of Spain than in it. Its highly emotional, insidiously rhythmic, blazingly colorful characteristics have seduced the world’s most eminent composers.

It is possible, however, that even more Spanish music has been composed outside of Spain than in it. Its highly emotional, insidiously rhythmic, blazingly colorful characteristics have seduced the world’s most eminent composers. Debussy, Chabrier and Ravel are notable among the great French talents who, at one time or another in their careers, fell under the spell of Spain. Jules Massenet, represented in this album by the graceful Castillane from his opera El Cid, was another. Probably the consummate expression of Spanish musical influence on a French-man was Carmen, one of the most sublimely integrated and emotionally stimulating operas of all time, and of course the crowning achievement of its composer, Georges Bizet. The Intermezzo heard on this recording is from Carmen Suite No. 14. It contains rippling flute and harp passages of unparalleled tranquility and delight, which reflect the potent blend of, French dramatic lyricism with themes that are inescapably Spanish.

The devious route which carried the music of Spain out to the rest of the world proved to be a two-way street through which foreign idioms came in. Manuel de Falla is an interesting illustration of this. One of Spain’s most gifted musicians and a dedicated pupil of the Iberian nationalist composer Felipe Pedrell, Falla was in turn strongly influenced by the impressionists Debussy, Ravel and Dukas, whom he met in Paris when he visited there in 1907. The engaging Danza (Spanish Dance No. 1), included here, is from the opera La Vida Breve (The Short Life), one of his earliest works. Its inherent excitement is skillfully dramatized by Carmen. Dragon. The impress of the tempo español is nowhere sharper or more vivid than in Latin American folk tunes, whose character was molded by the long-ago conquistadores and their numerous descendants. The folk themes which permeate most Spanish music—from the hoarse
flamencos of the cantinas to the classical studies for violin, guitar and piano—emigrated to the New World, where the syncopated Iberian beat and the percussive Indian rhythms took to each other readily and made a happy marriage. The body of folk songs which resulted —sentimental, bawdy, tender, sad, gay and altogether wonderful — inevitably crossed the border into the United States, where they have become increasingly familiar and popular. Two particularly charming examples of Latin America’s folk music — Ay, Ay, Ay and Jesusita en Chihuahua—have been chosen for this album by Carmen Dragon, who treats them with the affection they deserve. Jesusita includes the extra delight of a typical Mexican mariachi hand, which engages in a musical dialogue with the full orchestra. Spanish dance forms crossed the great ocean to the Western Hemisphere along with Spanish music, and one of the most spectacular of these was the tango. Descended from a Negro dance called the tangano, it journeyed in various forms to Andalucia, the. rest of Spain and to the Americas. Its last major excursion was up from Argentina to the United States, as an exhibition dance. Characterized by aristocratic but free-flowing movements, the tango persists as a steady favorite in this country, and La Cumparsita is possibly the one most frequently heard. Conductor Dragon gives this composition a sparkling performance in which soaring strings, growling trombones, crackling trumpets and the hypnotic interbeat of castanet and tambourine emphasize its fascinating rhythm.

Other successful Castilian-accented residents of the United States are Lady of Spain, Jalousie and Valencia, all three enjoying long careers as popular standards and susceptible to a variety of stirring treatments. Carmen Dragon displays taste and flexibility in gracing these favorites with the opulent spectrum of tone, rhythm and harmonic richness which only the full symphony orchestra can provide. Mr. Dragon ebulliently explores the rhythmic variations of fandango, waltz, tango, galop, beguine, samba and mambo with a dazzling counterplay of instrumental colors—calling upon marimbas, flutes, bongos, castanets, maracas, tambourines and all the varied percussive accents which punctuate so much of Spanish music.

CARMEN DRAGON has distinguished, himself in America as an out-standing composer, arranger and conductor in many fields of music, including motion pictures, radio and television, and appearances with major symphony orchestras throughout the nation.