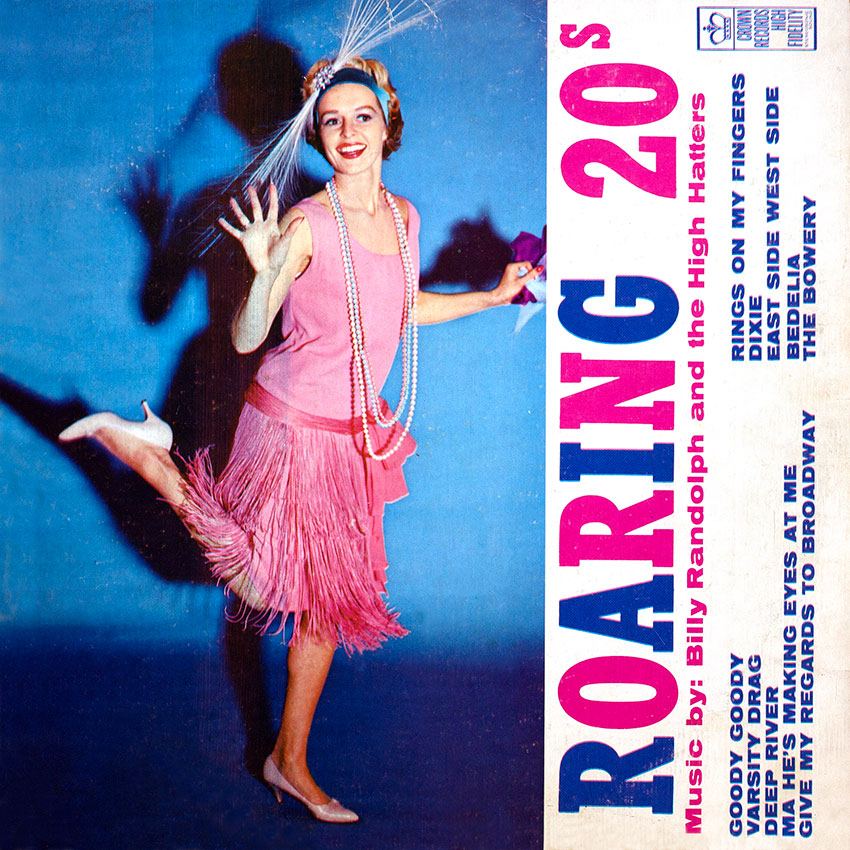 “The Roaring Twenties” . . . the most hysterical and frantic era of American life came right after the stern and cruel years of World War I. The crisis was over . . . we had won . . . and instead of rebuilding the country and the economy . . . America went on a 10 year binge.

The whole pattern of the times was that of a gigantic playground, reaching its aesthetic peak in 1929. Spurred on by Prohibition – the last gasp of the dying order — Americans went on a 10 year “bat”. Sex was rediscovered, and the nation reacted between the rhythms of the “Charleston” and the “Black Bottom”.

In between bouts it staggered to the window to cheer Al Capone, Charles A. Lindbergh, Peaches Browning, Gertrude Ederle, Herbert Hoover’ and Aimee Semple McPherson.

Americans in the thousands surged into the cabarets . . . and from there to the speakeasies, joints and dives. The legitimate theatre and even the all-powerful vaudevalle (sic), watched the patrons pass them by for headier entertainment. But the legit theatre soon sensed the trend and spiced up its offerings . . . however, vaudeville was soon almost devoured by what had been, up to now, a laughable medium . . . the motion pictures.

Radio came into its own . . . and had it not been for the “talking pictures” . . radio might have forced Hollywood off its pinnacle.

This was the mad era of American life. Prices started to climb upwards and upwards. And in the early 20’s many started to get their feet wet in the stock market. There were some who warned of over-inflation . . . but the brakes were off and nobody wanted to listen. Between 1924 and 1927 Americans were dazzled to learn that the crop of millionaires had increased from only 75 to 293. Show business was bulging at the seams. There were 21,897 theatres, museums and concert halls; 190 circuses, and 8,876 other types of exhibition. A 1925 issue of The Saturday Evening Post carried 249 pages of ads that cost $1,400,000. William Jennings Byran lectured in Florida on the advantages of buying land . . . and for an encore, Gilda Gray did her shimmy dance.

The bubble began to burst in 1926, and collapsed with a roar in September of that year when a hurricane roared out of the Caribbean to swamp the Miami boom area.

March 24, 1928 marked the beginning of the “Bull Market” on Wall Street which swirled the nation to the top of its financial razzle-dazzle. Everybody from bootblack to steeplejack plunged into the market for a nip at the Golden Apple. But in October of 1929 . . . the entire facade fell with a crashing sound that was heard around world. The grey skies over Wall Street seemed light compared to the ashen faces of those who saw their entire life go roaring by.

The financial bankruptcy of 1929 was the logical follow-up to an era that began in 1919 with a spiritual bankruptcy.

The feminine fashions of the 20’s seem to be recreating themselves in the late 1950’s . . but with the hope that the fashions don’t foreshadow the same financial deluge.

But what of the music of this frantic and frentic era? The songs were those of the flapper… the one with the stockings rolled “below” the knee. The hip-flask… and long cigarette-holder (for women had just started to smoke in public). The songs of the era were bright and slightly fragile. The melodies that depicted wild life on the campuses of America. The songs from the smoke-filled cabarets of the major cities. The spots where for a price, the most beautiful dancer in the show would bathe in a bowl of champagne… for the exotic enjoyment of the elite. An era running full-speed towards destruction. Not knowing it. But laughing and singing as they went. An era that is represented many times over in other ages past.

So this… the music of the roaring 20’s. Gay! Light-hearted! Not subtle! Just music for a good time… and never mind about tomorrow. Typical of the Roaring 20’s.